Stories, histories, History: never will I pretend not to need them, rely on them, nor require them. Who would dare deny and ignore the vital value of History, or the sense of History? So obviously, this never will be the point of this post. Neither are the various semantic differences, between the three above-mentioned terms, the issue. I am only using these words after my SAS friends and former bloggers.

I would like to complement their thoughts on the subject with a couple of notions:

Last century, I came across this Californian mural in a backstreet just behind the throb of Venice Beach, the one-way road-sign as an ironic comment on the forward thrust of the neo-Botticellian beauty. “Do not enter”: words explicit the order, of the road-sign, that shall not be breached: they contradict evidence, as both History and myth are always already entered. Myth! “History is Myth”, she claims, clad in 1990’s fashionable clothes that are so politically decent, and no match to the natural appearance of the original goddess… But this is not the place to comment upon what this mural might suggest about Culture and Society. 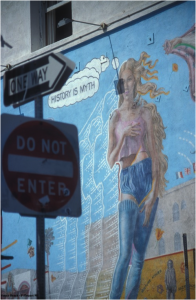 Rather, the reversal of the truism – one would perhaps expect to read something like “myths belong to History” – is striking, and imposes reflection on the power of historical references upon our thoughts, behaviours, creativity, spontaneity. If History is Myth, it is somehow single voiced, as Barthes suggests when he writes: “Mythical speech is made of a material which has already been worked on so as to make it suitable for communication”. That is to say, one may assert it becomes a tool to enforce one given message…

A couple of years ago, Nigerian writer Chimamanda Adichie delivered a cogent speech about the danger of a single story (easy to listen to on TedTalks). Let me quote her: “The single story creates stereotypes, and the problem with stereotypes is not that they are untrue, but that they are incomplete. They make one story become the only story.”

Diversity is what we need, including a variety of points of view, from which one would have the chance to forge one’s own opinion, culture, knowledge. There is not ONE Book, except in places that deny freedom of expression and belief. This is true in politics, in religion. It is also true in culture. So too in animation studies… (which, incidentally, also accords with Timo’s comment when he reminds us that there exist “non-English-language films…”)

Animationstudies 2.0? 2.0… Wouldn’t that entail that one yearns for something new, afresh? Let us be utopian, if not provokingly libertarian: something freed from the weight and format of History? That, in its own way, the mural did suggest some time ago. More prosaically, shouldn’t we foster imagination and creativity as THE glaring priority? Or to give up, be even more prosaic, and gloomily stare at, abide by, the constraints of the job market, the power of professional networks, the vanity of academia.

Did every pioneer of animation have to go to university?! As a very new art form, should animation bask in some generally accepted, formatted, official version of History? The key point may be less in teaching animation than in learning and experimenting animation. Should the learner be provided some selected content? (But on which grounds, one individual’s / the system’s?)

Or rather, should we nurture the learner’s appetite for their own cultural awareness, artistic fondness, critical minds – and, who knows, their own creativity? Animationstudies 2.0, as: looking ahead? I do not hold the answer. Animation is first and foremost animated, “animating and reanimating” (to quote Cholodenko), I mean alive and metamorphic.

Or else: “Animation studies” (1.0) historically focused mainly on “animation stories”, somehow on occasions mirroring the syndrome of “the single story”. Maybe Animationstudies 2.0 is to – no, never replace completely that “single story”, but – just even better promote a fecund variety of (critical / theoretical / comparative / aesthetic…) studies in / stories about animation. Doing so, every participant, through their films, books, speeches, enthusiasm, in their own way would fairly be part of what Derrida describes as “the trace”, that is: what remains from the past, already showing the imprint of its connection to the future (animation).

Pierre Floquet teaches English, and is associate professor at IPB, Universite de Bordeaux. His 1996 PhD thesis dealt with linguistics applied to cinema, focusing on Tex Avery’s cartoons. Since then, he has organized several Avery retrospectives and conferences, and been a juror at animation festivals. He has widened his interests to live-action cinema, participating in books and journals both in France and abroad.