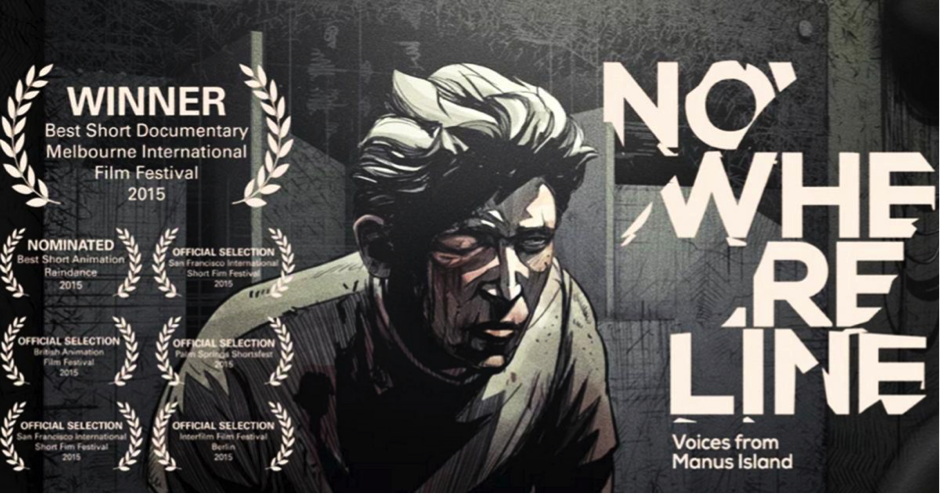 The poster of Nowhere Line

As its name indicates, this is an endeavour to give a ‘voice’ to those held in indefinite incarceration, while their asylum claims are processed. ‘Voice’, as granting a subject’s perspective and position space, validity and recognition, here also applies literally. The crackling and sometimes muffled quality of the subjects’ voices, recorded from interviews conducted by mobile phone, helps position the film in the category of documentary and simultaneously cues the ‘presence’, and secondary witnessing, of the viewer.

The use of animation to visually narrate and represent this story is a virtue born of necessity. Few journalists manage to gain access to these camps, and employees and service providers are subject to gag orders. The inventive approach of Nowhere Line therefore allows for and consequently offers a significant intervention.

Animation offers almost unlimited variations and stylistic possibilities, so it is worth noting that Schrank chose a cinematic aesthetic, largely mimicking conventions of recording technologies. However, the extreme camera angles and high key lighting add qualities more commonly aligned with action and drama, than factual modes. This is a deliberate divergence from images and registers potentially burdened by compassion fatigue [i], and the film’s noir-inflected aesthetic offers associations with comics creators such as Frank Miller. However, the connection to comics is more profound, as Schrank’s project was kindled by one. The No Way comic is a 18-page, for the most part word-less, digital graphic narrative, first published on Australia’s Customs & Border Protection Agency website in November 2013, and presumably distributed overseas in both digital and paper form.

It offers a bluntly told cautionary tale, intended to ‘deter people smuggling by alerting potential illegal immigrants to the dangers of people smuggling ventures and educating them about Australia’s immigration policy’[ii]. 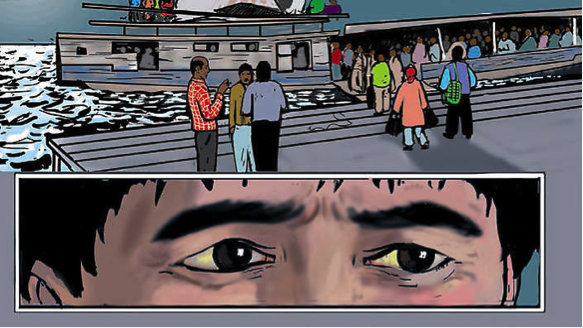 A panel from the No Way comic

Presenting few surprises, the narrative follows a young Afghan mechanic who leaves his village to seek a new future in Australia (although never acknowledging this as a forced decision). While widely recognized as a propaganda effort, the comic carefully avoids the dehumanizing caricatures associated with propaganda. Accurately drawn proportions and perspective, direct angles and an, evenly weighted, black outline instead make for a leaden realism. The sanitized depictions of the journey and the camps are strangely devoid of emotion or dramatic tension, yet clearly intended to deter.

Schrank’s initial dismay at this use of comics as a propaganda vehicle shows how comics aggregate meanings and associations, aligning the form with anti-authoritarian subversion and defiance of censorship. The No Way comic is a pertinent reminder that the histories of both comics and animation also include furthering the agendas of governments and institutions.

No Way aims to circulate its message more effectively by employing a form associated with popular entertainment, assiduously avoiding hyperbole. As its ideological counter point, Nowhere Line offers a position of secondary witnessing to realities and events kept from public scrutiny. The film deliberately sidesteps conventions of factual story-telling in order to engender affect. Where No Way adopts the ostensible neutrality of tone that masks (and marks) the didacticism of certain documentary traditions, in Nowhere Line persuasive power and authenticity is conferred through testimony and overt subjectivity. However disparate in terms of perspective, purpose and rhetorical address, both texts understand that defying expectation can be a useful strategy.

Nina Mickwitz is a Lecturer at London College of Communication, University of the Arts London. She completed her PhD on comics and documentary in the Department of Film, Television and Media at University of East Anglia. Her monograph Documentary Comics: Graphic Truth-telling in a Skeptical Age was published by Palgrave Macmillan in 2015.