On May 12, 2015, the Academy Theater in New York City hosted “Anatomy of an Animation Studio: An Evening with Blue Sky,”[1] a presentation by the studio’s leading creative figures. Throughout the evening, director and co-founder Chris Wedge, director Carlos Saldanha, producer John Donkin, and art director Tom Cardone offered a variety of anecdotes, statistics, and behind-the-scenes glimpses into the work of Blue Sky. But it was one particular piece of trivia about the movie Epic (Chris Wedge, 2013) – one of the studio’s lesser-known and certainly under-appreciated features about a teenage girl who shrinks in size and discovers a tiny forest civilization – that caught my attention. During his talk, titled “Building a World,” Wedge shared that the look of Epic was influenced by the work of adventure illustrators such as N.C. Wyeth and Victorian fairy paintings.

Epic stands out from the rest of Blue Sky’s catalog in many ways. IndieWire’s Bill Desowitz hits upon some of the main distinctions by pointing out that the film is “not intended to be cute,” is “shot and paced more like live-action than animation,” and features performances that are “more nuanced than the broad animation they’re used to at Blue Sky.”[2] However, Epic’s crowning achievement is arguably its lush, vibrant, and hyper-detailed forest environment which is at once unmistakably alien and comfortingly familiar, phantasmagorical and naturalistic, stylized and yet almost obsessive in its attention to botanical and zoological detail. A closer look at the film’s landscape and character design suggests that the Victorian roots of its visual aesthetic may hold the key to the singularity of its sylvan setting.

Epic’s Victorian lineage goes back to its literary origins. The Frick Collection’s Victorian Fairy Painting exhibition[3], which ran from October 14, 1998, to January 17, 1999, inspired William Joyce’s Leaf Men and the Brave Good Bugs, which Epic is loosely based on.[4] The film, in turn, draws on the fairy imagery of artists such as John Anster Fitzgerald and Richard Dadd for the design of its characters, as well as their attire, modes of transportation, and surroundings.

Take, for instance, Fitzgerald’s “The Fairy’s Barque” below: 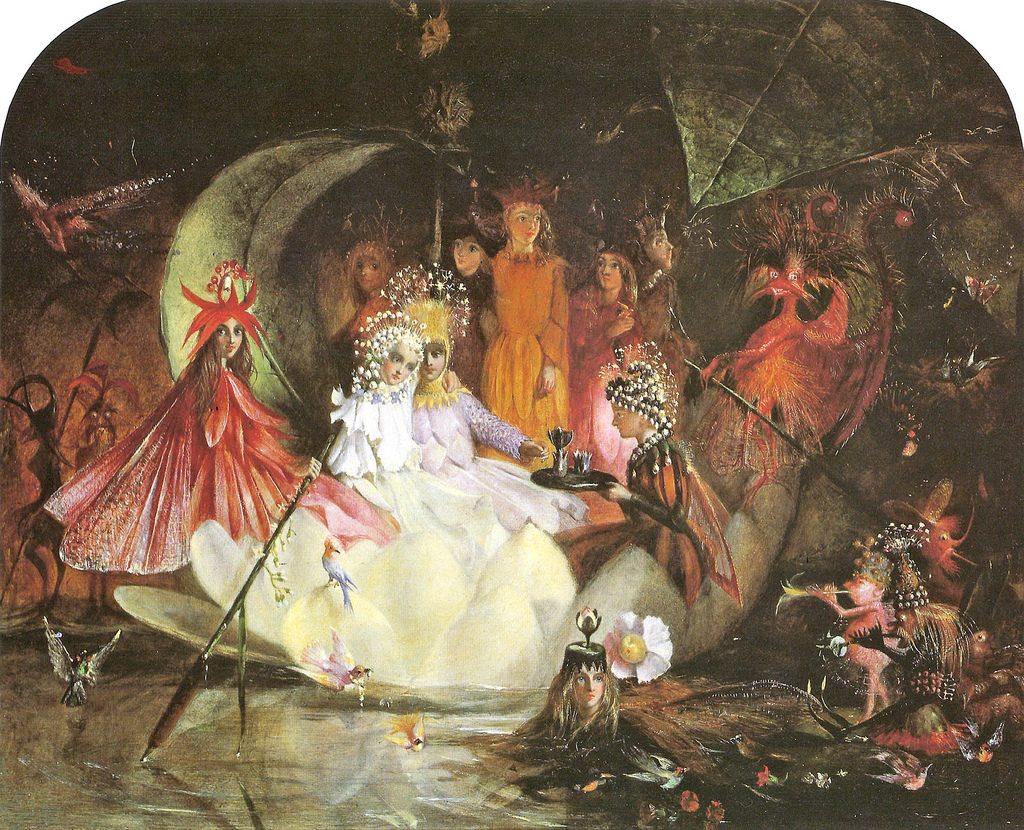 Now compare it to the following two images from Epic:

As these images reveal, Fitzgerald’s incorporation of organic elements (such as petals) in the dress of his fairies is reflected in Epic’s character design. Both Queen Tara’s white petal dress and the dandelion headdress pictured in the second still from the film closely resemble the Victorian artwork. Epic even pays homage to Fitzgerald’s incorporation of water lilies as both architectural elements of the landscape and flotation devices.

The film’s villains – a race of insect-like beings known as Boggans – are also depicted in a manner reminiscent of Victorian fairy paintings. Here is Fitzgerald’s “The Fairy’s Lake,” exhibited in 1866: 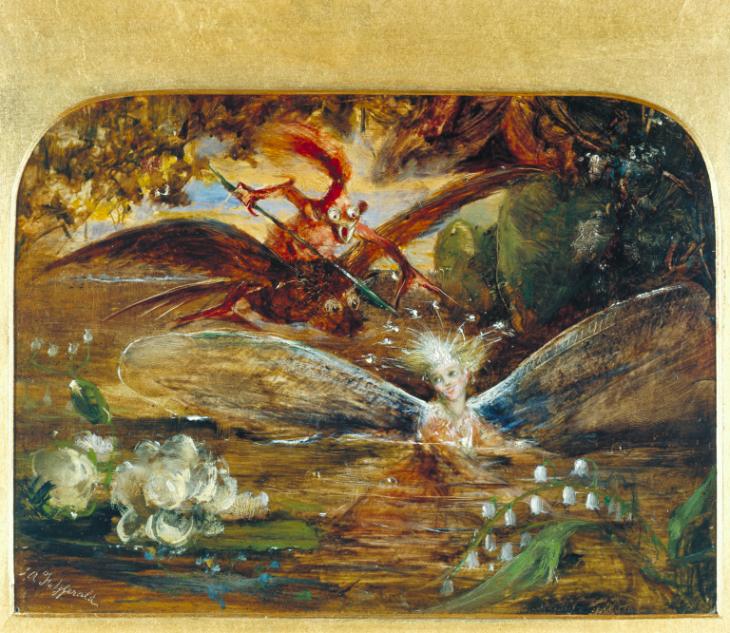 Compare it to this shot from Epic:

A shot from Blue Sky’s Epic

Victorian fairy paintings and Epic challenge and transcend the divide between nature and civilization by revealing a hidden, miniature civilization that is fundamentally one with nature in an idealized, magical sense supposedly long lost to post-industrial human society. Both the film and the fairy paintings (which were, after all, rooted in Romanticism) are permeated by a sense of longing for the unmediated and uncomplicated access to the natural world that the tiny creatures enjoy. Indeed, Epic’s world is quintessentially symbiotic, as the very term Leafmen (Epic’s tiny humanoid beings entrusted with protecting the forest) suggests. Leafmen warriors wear plant armor and ride hummingbirds. The environment is an essential part of their identity and social order. Forest creatures and flowers live among them (as they do in fairy paintings as well), fully integrated in this utopian fantasy society. A pair of talking slugs provides comic relief. A young marigold flower Jinn eventually becomes the next queen of the forest. Fittingly, the teen protagonist’s escape to this secret fairy realm ultimately proves elusive and temporary. Like her literary Victorian predecessor, Lewis Carroll’s Alice, M.K. rejoins the human world, having returned to her original size.

In emulating the aesthetics of Victorian fairy paintings, Epic has also inherited their defamiliarizing effect. By playing with relative size and inviting its audience to rediscover the forest world literally from the ground up, the film is an exploration of the commonplace-as-new. Leaves, flowers, and birds, brought closer to our eyes in glorious, unexpected detail, reveal a new dimension of often glimpsed, but rarely seen textures, colors and shapes. Even more so than its beautiful landscapes or fluid animation, the source of Epic’s charm – and the core of its Victorian fairy spirit – may just be its capacity to resurrect, albeit briefly, a sense of awe and wonder at the hidden marvels and unseen lives of the forest.

[1] A detailed report of this event by Yvonne G. is available at http://www.animationforadults.com/2015/06/anatomy-of-animation-studio-evening.html.

[3] For a short description of the exhibition’s contents, see http://www.frick.org/exhibitions/past/1999/victorian-fairy-painting

[4] For a more detailed account of the genesis and production philosophy of Epic, see Bill Desowitz, “Immersed in Movies: Chris Wedge gets ‘Epic,’ http://www.indiewire.com/2013/05/immersed-in-movies-chris-wedge-gets-epic-122967/

2 responses to “The Victorian Roots of Blue Sky’s Epic”