With its mischievous smile, big expressive eyes, and red collar, the creature featuring on the promotional poster for Lilo & Stitch (2002, by Dean DeBlois and Chris Sanders) might recall the numerous pets of the Disney canon. Yet, his blue fur, claws, and overall monstrous appearance cause fear, repulsion, and anger among the Disney “family”. Iconic characters such as Tinkerbell, Pinocchio, Dopey, Pumba, Belle and Aladdin stand back from this intruder which visually and, most importantly, generically differs from them. 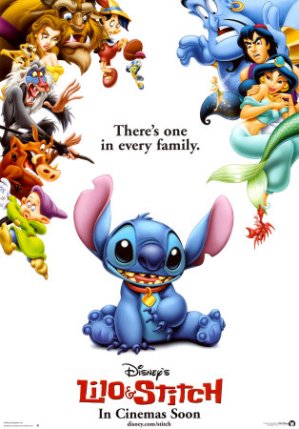 Promotional poster for Lilo and Stitch

Lilo & Stitch follows the adventures of the unruly alien Stitch, a scientific experiment gone wrong which escapes its prison asteroid and lands in Hawaii, before being adopted by little girl Lilo. The marketing of the film parallels this outsider story, positioning Lilo & Stitch as a deviation from the genres most linked with Disney, such as the musical and the fairy tale, and more generally from what Jack Zipes refers to as the “Disney formula:” a predictable storyline characterized by an overall naïve and cheerful tone, featuring one-dimensional protagonists and cute comic animal sidekicks[i]. At a time when Disney animated films were mocked by DreamWorks’ output – most significantly with Shrek (2001) – and outdated by Pixar, this promotional strategy aimed at challenging viewers’ expectations towards Disney. This generic variation is primarily represented through Stitch, a vehicle for science fiction. Both the inclusion and intrusion of this genre, particularly rare within the Disney canon, serve to expand and parody the perceived generic “formula” of the studio.

Trailers set the tone, featuring semantic traits such as ray guns, spaceships, and laser weaponry, which epitomize the “visual and aural spectacles of sf tropes”[ii]. The official synopsis similarly mentions easily identifiable sci-fi stock characters, settings, and motifs: “alien,” “far-away planet,” “crash-landing on Earth”[iii]. This generic emphasis is reinforced via intertextual references. For example, the character of Cobra Bubbles, although a social worker in the film, is reframed as a Men in Black figure, “the one they call when things go wrong.”

These generic inclusions operated a subtle but clever generic shift from typical Disney animation. Janet Wasko observes that, in the early 2000s, audiences tended to associate Disney with “magic” and “fantasy”[iv]. As one of Disney’s first animated sci-fi films[v], Lilo & Stitch and the accompanying marketing embraced a genre that also features imaginative new worlds, but that are technologically-based, grounded in the sciences, and continuous with ours[vi]. In promotional interviews, this generic shift from fantasy to science fiction was translated into a move towards more realism, especially regarding character portrayals. Co-director Chris Sanders explained that he wanted to “let go the idea of good and evil. That’s great if you’re doing a fairy tale, but we wanted this film to have a different fee”[vii]. Believability also led him to discard the musical: “the minute a character begins to sing, it places that film in a certain realm”[viii]. Yet, these generic deviations were presented in a way that did not entirely disorient audiences. They were combined with an emphasis on the family film, a generic label most often associated with Disney animation. The official synopsis foregrounded both Stitch’s new diegetic family (“Stitch… learns about ‘ohana, the Hawaiian tradition of family”) and the extra-diegetic family target (“there’s excitement and entertainment for every member of your ‘ohana!”)[ix]. Co-director Dean Deblois described the theme of family as central, both perpetuating Disney’s “legacy” and “updat[ing]” it through a relatable depiction of sisterhood and unconventional family units[x].

Relying on a genre unusual within the Disney canon, the marketing of Lilo & Stitch then promoted the latter as a sci-fi family hybrid, expanding the Disney formula and targeting a wider audience as a result. This sci-fi inclusion also allowed a parodic stance towards genres more readily associated with Disney via what I term the “legacy” or “retrospective” trailer.

Particularly used by animation studios, and especially by Disney, the “retrospective trailer” opens with clips from past films before introducing the studio’s latest release. It constructs and sustains a cohesive studio identity via the recurrence of certain genres and themes, providing a specific interpretative framework for the upcoming feature. One trailer for Lilo & Stitch similarly opens with clips from Beauty and the Beast (1991), Snow White and the Seven Dwarfs (1937), Bambi (1940), Tarzan (1999) and Aladdin (1992). As they seamlessly dissolve into each other, the voiceover foregrounds the common points between all these fairy-tale and musical hits: “enchanting, delightful, and lovable characters.” The “tradition” is broken by a sci-fi intrusion in a clip from The Lion King (1994). As mandrill Rafiki walks towards all the animals of the savannah to present Simba, they realize in horror that the lion cub is actually the alien Stitch: the solemn song “Circle of Life” is stopped, and chaos breaks out. Four “legacy” teasers similarly featured Stitch intruding into Disney animated films, subverting the musical and fairy-tale tropes from the Disney formula via the invasion of the “alien” sci-fi genre. For example, Stitch disrupts the dreamlike fantasy atmosphere of “A Whole New World”: his high-tech spaceship overtakes Aladdin’s magic carpet, his loud honks and rock music stop the romantic ballad, and his open flirting leads Jasmine to leave Aladdin and join Stitch for a ride.

Paradoxically, by only re-staging scenes that epitomized the Disney formula, these trailers and teasers both knowingly subverted its perceived clichés, and embraced them as part of their legacy. Although Lilo & Stitch was presented as a generic departure, it was also introduced after and included within the Disney canon. The latter was constructed as a seamless succession of critically acclaimed hits, possessing a cross-generational appeal and spanning several decades – from Snow White to The Lion King. This provided a specific interpretive framework for Lilo & Stitch, built on nostalgia for iconic family films from which it derived despite its sci-fi borrowings.

At a time when rival studios Pixar and DreamWorks either mocked or outdated the conventions of the “Disney formula” and its associated genres, Disney’s promotional materials privileged deviations from this legacy. The marketing of Lilo & Stitch relied on generic hybridity and parody, permitted by the inclusion and intrusion of the science fiction genre. Yet, this challenge was also tempered with an emphasis on tropes more easily identified with Disney, such as the family film and nostalgia. In other words, this promotional strategy challenged and widened the perceived boundaries of Disney’s generic identity, while reaffirming some of its most iconic features. This dual approach helped revive the image of the Disney brand, and may explain the critical and popular success of Lilo & Stitch at the box office. Throughout the marketing of Disney’s other contemporary animated sci-fi releases such as Treasure Planet (2002) and, to some extent, Atlantis: The Lost Empire (2001), the studio’s perceived legacy was completely omitted, focusing purely on science fiction instead. By contrast, the more inclusive and jokingly intrusive approach for Lilo & Stitch did not completely disorient audiences. This may suggest that, in terms of genre, Disney still needs to associate the “alien” with the familiar.

Eve Benhamou is a PhD candidate at the University of Bristol. Her research focuses on genre in Disney’s contemporary animated features (2006-2016), considering more particularly gender constructions, aesthetics and narrative. Her article “Freezing versus wrecking: Reworking the superhero genre in Disney’s Frozen (2013) and Wreck-It Ralph (2012)” was published in Animation Practice, Process & Production in 2016. She has presented papers on Disney and Pixar animation at several conferences, including “Symfrozium: A Study Day on Disney’s Frozen” (2015), “30 Years of Pixar Animation Studios” (2016), and BAFTSS Annual Conference 2017. She has co-organised 2016’s “Reimagining Beauty and the Beast” interdisciplinary conference (Bristol), and is now the co-convenor of the BAFTSS Special Interest Group on Animation.