Few films have made as deep an impact on international popular cultures as Akira (1988) by Katsuhiro Ötomo. This animated feature is a sci-fi apocalyptic opus, deeply political and incisive in how it captures the Japan of the bubble-economy era. Akira’s influential reach has extended far and wide, from The Matrix (1999, by Larry and Andy Wachowski) to Steven Universe (2013-present, by Rebecca Sugar). As a seminal work of science fiction, Akira is revolutionary in how it treats the divide between human and technology, since it erases it altogether.

So often in science fiction are technologic futures envisioned as sterile, minimalist, and devoid of life. Crisp, clean science labs and domineering technological institutes illustrate ideals of control and organization, envisioning a better world without the messiness of everyday life. The set design in Ex Machina (2015, by Alex Garland) serves as a current example of science fiction’s fascination with minimalist design.

By contrast, Akira examines and embraces the messiness that is science and, more broadly, human existence. This particularly emerges from its post-apocalyptic setting. The film takes place a few decades after World War III in Neo-Tokyo, the city rebuilt after Tokyo was obliterated in nuclear destruction. Ötomo draws from post-WWII Japanese consciousness and exhibits nuclear anxieties in their true potential, from crowed alleys filled with detritus to sewers with rotting rats.

But Ötomo’s exploration of the contingent also emerges from the political. While post-apocalyptic science fiction, such as The Hunger Games franchise, still illustrates powerful bureaucracies centered around order, control, and cleanliness, Ötomo connects Neo-Tokyo to critiques of contemporary Japanese political life. The bureaucratic institutions in Akira are barely functioning, and are instead beds of corruption and confusion. Technology labs are not minimalist, but rather crowded with electronics and screens. 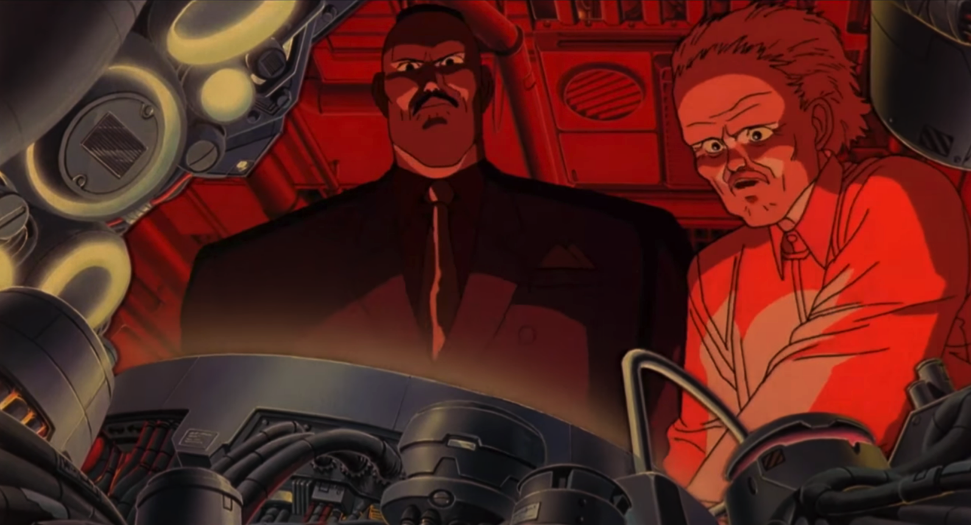 An example of Akira‘s crowded labs

In recognizing the limits of control and the limitless potentials of science, Akira ultimately avoids the division between the organic and the technological, fusing instead the organic with the technological throughout the film. After the film’s opening shot of Tokyo being decimated by nuclear destruction, an image of what appears to be a microscopic view of biological tissues turns out to be an aerial view of Neo-Tokyo. Instead of the controlled sterility in vogue in contemporary science fiction cinema, Tetsuo’s transformations meld organic matter with inorganic materials such as wires, concrete, and detritus, producing a mass that challenges the preconceptions of science fiction.

A frame from the scene of Tetsuo’s transformation

Akira’s ending – with Tetsuo becoming a small ball of light, representing the infinite power and potentials – is an apt metaphor for Akira’s treatment of science fiction as a whole. While films such as Ghost in the Shell (1995, by Mamoru Oshii) and The Matrix explore the divide between technology and the human/soul/consciousness, Akira instead illustrates how technology augments our very own bodily existence. The recognition of technology’s impact on the body has become more apparent in recent years, with modern examples such as phantom vibrations illustrating the importance of recognizing what often gets ignored in the discussion of technology and transhumanism: the body itself. Ötomo’s vision explores philosophical concepts such as technology, control, and growth through the vessel of embodiment, ultimately envisioning the future of the physiological ramifications of technology.

Jacqueline Ristola will graduate from York University with a Masters in Cinema and Media Studies in June 2017. Her MA project explored the cross-cultural aesthetic exchanges between Samurai Champloo and The Boondocks. Her work can be found in Animation Studies and Bright Wall/Dark Room. She will continue to study Japanese animation at Concordia University starting from Fall 2017.

3 responses to “Embodying the Future: Akira and the Technological Science Fiction”