Interestingly, today’s hyper-visual and screen-based “era of information” is also defined as a time of “post-truth” (Oxford Dictionary’s 2016 “word of the year”). The tension between knowing and not knowing, between being informed and being misinformed is therefore timelier than ever, which brings me to invisibility. Maureen Burns explains that a sense of the invisible “evokes what we both don’t know and the traces, the excess, the supplement to our established structures of knowledge. It is the crumb line leading us to a suspicion that there must be more to the visual landscape”.[i] The gap between the visible and invisible, as the known and unknown, what is exposed and what is kept hidden is what links this investigation of animation in non-fiction visual culture to invisibility.

In the past, the combination of animation with documentary or non-fiction may have seemed oxymoronic. Animation’s obviously constructed nature may have seemed problematic at first but has led to its theorization as a more honest approach to documentary.[ii] When analyzing animated documentary as masking in 2011, I saw animation’s blatant emphasis of its disguising façade as that “crumb line” that points to what is not seen, raising questions about the convergence of exposure and disguise, the visible and the invisible, in the representational process.[iii] But is this still the case today?

In recent years, animation has expanded exponentially into myriad non-fiction fields, and is now all around us in film, journalism, forensics, online gaming, data and scientific visualizations, and more. There are many reasons for animation’s proliferation in contemporary visual culture: the growing ease of animation production, documentary and surveillance culture, info-aesthetics and the Information Age, machine vision, omnipresent screens and the virtualization of culture.[iv] This shift demands a reconsideration of the status and uses of animation in contemporary visual culture as imagery that is increasingly being employed to depict factual information and is being progressively established as realistic.

Realism, as the articulation of the ‘real’, or what is accepted as a believable delivery of the real, is central to the study of the documentary field.[v] But realism can be many things. One interesting aspect is the idea that realism is based on familiarity and conventions of representation. Nelson Goodman contends that “the realism perceived in a picture arises…from the ease with which it is read…the more stereotypical and familiar the…modes of representation that generate an image, the more natural and true it seems”.[vi] This means that as animation in non-fiction proliferates and its uses in contemporary non-fiction visual culture vary, the reception of animation as realistic may continue to rise, based on its changing uses and popularity in today’s mediasphere.

As animation’s popularity rises, it has great marketing potential. As a result, many documentaries now use animation, but not necessarily in ways that explore what the aesthetics can contribute, or what layers of meaning they might add; rather, the animation is hurried and superficial, merely visualizing what is heard on the soundtrack.[vii] This is often the case in animated simulations of the news, in reenactments where the animated sequence is meant to show viewers what took place and how the event unfolded. The Dutch Safety Board showing the probable path of a Buk Missile which caused the fatal crash of Malaysia Airlines flight MH17 in July 2014 is a useful example.[viii] 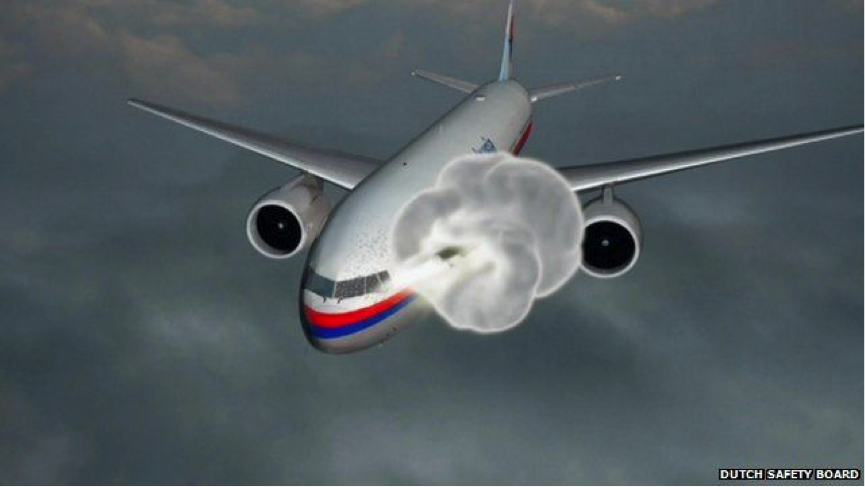 Fig. 1. Dutch Safety Board video showing the fatal crash of Malaysia Airlines flight MH17 in July 2014, shown on the BBC.

The animation gains credibility by being shown on the BBC, an authoritative media source that encourages unquestioning reception of the information as fact. In cases such as this, the animation is simple and straightforward, with a dry confident voiceover explaining the course of events, and emphasizing ‘evidence’ and ‘proof’. The outcome is that the constructed animated representation is posited as a direct presentation of authoritative facts, rather than one interpretation among many.

Examples such as these and the growing visibility of animation in non-fiction can create uncritical spectatorship. Once the aesthetics of representation are no longer perceived as aesthetics, they become transparent because the representation is read as if it were reality itself.[ix] This has important political outcomes. Indeed, since once representation is no longer seen as such, what is represented can be viewed as ‘real’ rather than cultural and constructed, thus making it complicit with existing ideology. In other words, is animation becoming invisible as viewers become desensitized to its complex visual information-transferal possibilities? This desensitization has various possible ramifications: rather than contemplating animation’s signifying capabilities, truth value and persuasiveness, or the multiple ways it can depict subject matter, viewers may become apathetic and uncritical, leaving viewing open to misinformation and manipulation. These evolving trends in contemporary non-fiction visual culture shape viewers’ understanding of ‘factual’ information and their corresponding worldviews. In an era of fake news it has become crucial for the 21st century’s world politics to address these issues.

Nea Ehrlich completed her PhD in the Department of Art History at the University of Edinburgh in 2014. She was a Polonsky Postdoctoral Fellow at The Van Leer Jerusalem Institute and is now a lecturer in the Department of the Arts at Ben Gurion University of the Negev in Israel. Her work lies at the intersection of Art History, Film Studies, Animation, Digital Media Theory, Gaming and Epistemology. She has published articles in edited volumes and journals and is co-editor of Drawn from Life, the forthcoming 2018 anthology about animated documentaries published by Edinburgh University Press. She is currently working on a book on documentary aesthetics in a virtualized culture.

[iv] See my chapter “Indeterminate and Intermediate or Animated Non-Fiction: Why Now?” in the forthcoming anthology on animated documentary, Drawn from Life, edited by Jonathan Murray and myself, which will be published by Edinburgh University Press in 2018.

[v] This is not to say that realism is exclusively related to documentary since it is also used in fiction.

[vi] Gunning, “Truthiness and the More Real: What is the Difference?”, in More Real? Art in the Age of Truthiness, edited by Elizabeth Armstrong. (Minneapolis: Minneapolis Institute of Arts, 2013),185.

One response to “Invisible Animation: Animated Non-fiction and Invisibility in an Era of Post-Truth”