‘With animation you can do everything’. This is what director Ari Folman says in the extras of his award-winning animated film Vals Im Bashir (Waltz with Bashir, 2008)[1]. And, indeed, it seems that there is nothing animated films are not capable of visualizing. Ghosts, fantastic beings, past or future things, images of feelings or thoughts, everything can be created with animation. Even more, the invisible, the fantastic, what exceeds our perception is the real domain of the animated film. Since its beginnings, talking animals, ghosts, demons, and fairies have populated animation. It is no coincidence that two early classics of the genre are Fantasmagorie (1908, by Èmile Cohl) and Walt Disney Studios’ Fantasia (1940). Although today the realistically animated film is well established especially in Asia, many worldwide box office hits are animated films with fantastic, fairytale stories, with animals or monster-like protagonists.

Yet, films such as Folman’s Waltz with Bashir show us that the invisible is also present in a genre whose techniques can apparently make anything visible. The invisible is not the supernatural or the transcendental, but what cannot be imagined and expressed, not in a creative or technical sense, but in a psychological one. The invisible is associated with a taboo and it can only be represented by passing through a certain pain threshold. The invisible is the trauma. 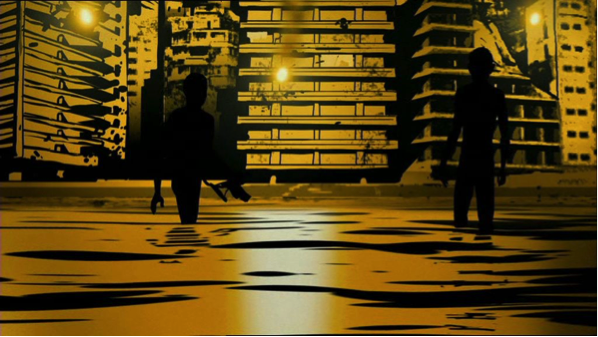 Fig.1. The only memory Ari has of the Lebanon War: naked soldiers approaching Beirut from the sea.

Waltz with Bashir is about coming to terms with such a trauma. The film is nothing other than a psychotherapeutic session, the aim of which is to treat the traumatic disorder of the protagonist and alter ego of the director, resulting from his experiences during the Lebanon war. The film makes no secret of it. Indeed, it begins with a dream sequence in which a pack of wild dogs hunts through a city, only to stop under the window of Boaz Rein-Buskila, a friend of the protagonist, and it shakes him out of his sleep by means of their loud barking. When Israeli soldiers invaded Lebanon, Boaz had to shoot 26 dogs with a gun silencer, so that their barking would not wake up the villagers. But in his dreams the dogs come back every night, stealing Boaz his sleep.

The film reveals its agenda in the first dialogue. ‘Can’t films be therapeutic?’ says Boaz to Ari in the middle of the night in a gloomy pub, ‘You dealt with dozen of issues in your films’. The film serves as a treatment of the trauma. For this, the latent, the unconscious must become manifest. The invisible must become visible. Unlike Boaz, however, Ari has hardly any memories of the Lebanon war, and none whatsoever of the massacres in the refugee camps of Sabra and Shatila. After the encounter with Boaz, however, the question of his role during the war and especially in the mass murder of the Palestinians does not leave him alone: has he seen the atrocities? was he maybe even involved in them? These questions force themselves on the protagonist and, like Boaz’s dogs, they do not leave him alone. In order to fathom this ‘black hole’, as it is repeatedly called in the film, Ari starts to search for his lost memory. He meets old friends, war comrades, people involved in the war or persons with first-hand information, such as the Israeli war journalist Ron Ben-Yishai. 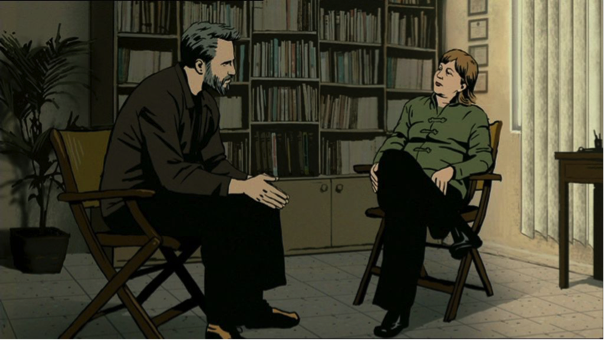 Waltz with Bashir is a slow, gradual, painful resurrection of repressed memories and images. Slowly the fog clears and Ari’s ghosts of the past take a shape. Only the mass murder in Sabra and Shatila remains a blank space until the end of the film. Finally, it is a report by Ron Ben-Yishai, who was one of the first to enter the camp with his film crew the morning after the massacre of Palestinian refugees, that brings back Ari’s memory: piles of corpses, including children, women and old people. Suddenly, after more than twenty years, the pictures are back. Ari sees himself as a young soldier facing a lot of screeching women. The women complain and bewail loudly their murdered relatives, who lie stacked in the backyards of the small houses of the camp.

Now, this is the crucial turn of the film. There are no more animated, artificially created images, but documentary footage from archive material of Sabra and Shatila. This stylistic incongruity makes clear that Waltz with Bashir is not just fiction. Forcibly, the viewer is torn away from the previous film and confronted with a reality that seizes and shocks him. But these real images of actual events, of innocent and defenseless victims in Waltz with Bashir need the bridge of the animated, artificially created images.

Fig. 5 and 6. The trauma, the invisible, materializes itself through animation and unfolds its painful and accusing power.

To portray the Lebanon War as an animated film is not primarily a production decision, but first of all an aesthetic one. With its artificiality, the animation offers the necessary distance to be able to approach the images of such an event. And, in times of progressive desensitization through floods of images,[2] it is only against an artificially, artistically created background, that these archival images can unfold their painful power. On the other hand, through their naturalistic style the animated images provide Waltz with Bashir with the necessary authenticity and personality, which, just like the distance mentioned above, is a prerequisite for dealing with the trauma and making the invisible visible.

Dr Carlo Avventi teaches Film and Media Education at the University of Education Heidelberg and is specialized in international film, film theory and film production. He has published several articles on different film topics and film directors as well as books on Wim Wenders and on the experimental film. He has produced and directed shorts, feature films and documentaries, which have been selected and awarded at international film festivals and screened on the television channels ARTE and ZDF.