In 2013 blogger Jon Negroni put forward ‘The Pixar Theory’: the concept that all Pixar movies exist in the same universe and can be organised into a single, cohesive timeline (see figure 1). The initial blog incorporates the 14 Pixar feature films released between Toy Story (1995, by John Lasseter) and Brave (2012, by Mark Andrews and Brenda Chapman), explaining why animals sometimes adopt human behaviours in the Pixar universe and how the movies play out a broader narrative of the struggle for power between humans, animals and machines. The blog went viral. Fans, theorist and industry commentators reposted the article, wrote critiques, and uploaded their own video versions on YouTube (e.g. see SuperCarlinBrothers, which has almost 9.5 million views recorded). Negroni has continued to update the theory with each new Pixar release and to respond to readers’ corrections and identification of flaws, which he published as a book in 2015.

Fig.1. The Pixar universe timeline according to the Pixar theory.

My interest here is not in the details and validity of the theory, but in its paratextual relationship to the Pixar films. Specifically, I will focus on how it impacts the meaning-making process and who it engages. First introduced by Gérard Genette, paratextuality is the engagement between a text and the associated surrounding material that contextualizes it (Genette 1997: 1). In other words, it is what Cronin identifies as ‘all those ancillary elements that coexist and co-mingle with the text proper’ (2014: xvi). In publishing, this includes a book’s title, cover, cover art, front matter, back matter, font and other details that frame the way a text is read. In film and television paratexts take, among others, the form of trailers, promos, reviews and interviews with creative personnel, and are often circulated prior to the film or television show’s release. Johnathan Gray acknowledges the pre-determining nature of such texts and suggests that the paratext ‘infringes upon the text, and invades its meaning-making process’ (2006: 36). Many are endorsed by the authors, producers or distributors of the texts. However, widespread Internet access has facilitated diversification in the production of paratextual material.

Fans and fandom are central to paratextuality. As Lincoln Geraghty observes, ‘we are now accustomed in fan studies to stating that the productivity of fans and their related fan practices represents an appropriate and worthy text to study just as much as the media text to which they are related or inspired by’ (2015: 1). This notion is premised on Henry Jenkins’ (1992) assertion of the active, participatory role audiences play in constructing and circulating meaning. Not only is the Pixar theory developed by a fan, but it has been widely shared with other fans. Such engagement provides an insight into the impact of a community of audiences on meaning-making and the ever-changing way audiences read and make sense of texts. Some fan-generated materials support industry frameworks by building on narratives and providing back stories, while others are subversive and challenge dominant readings by positing alternative interpretive strategies (Gray 2010: 44). The Pixar theory falls in the latter.

Engaging with the Pixar theory requires reading the films it incorporates in a specific (and alternative) way; that is, in a narrative chronologically with an overriding narrative arc. This alone subverts traditional engagement with children’s animation. Screen texts for children generally have discrete narratives, are self-contained within their franchise, and have a reasonably stable viewing age of between 4 and 10 years old. This results in certain generations forming ties to the films and franchises released during their childhood, and not necessarily beyond. The Pixar theory not only encourages (re)watching films released over a 20 year period – beyond any single generation or period of ‘childhood’ – but those (re)viewing the films are most likely outside the age conventionally targeted. The Pixar theory further invites a detective-like hunt for ‘Easter eggs’ from the Buy-n-Large (BNL) batteries that power the toys in Toy Story (the corporation running everything in Wall-E [2008, by Andrew Stanton]), to a wooden carving of Sulley from Monsters, Inc. (2001, by Pete Docter) in the witch’s shack in Brave (see respectively figures 2 and 3), and cross-over character appearances. 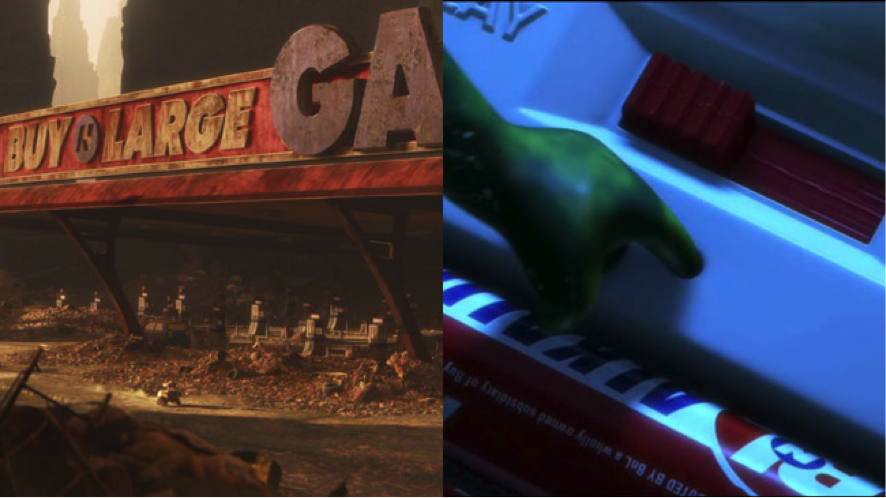 For example, Heimlich from A Bug’s Life (1998, by John Lasseter) is seen on a branch in Toy Story 2 (1999, by John Lasseter), Bomb Voyage from The Incredibles (2004, by Brad Bird) is a background mime in Ratatouille (2007, by Brad Bird), and Boo offers up her Nemo toy to Sulley in Monsters, Inc. Here the viewer’s focus shifts from the story narrative to the Pixar universe, which in itself foregrounds the mode of production and somewhat destabilizes the primacy of the text.

Fig. 3. Wood carving of Sulley in the witch’s shack in Brave.

A proliferation of material around the Pixar theory draws attention to its paratextuality and the ongoing process of meaning-making. It extends the original texts’ audience and offers new ways of engaging with the animations beyond their singular narrative bounds, and thereby it reinforces the audience’s agency in reading any text.

Lisa Hill writes on popular culture, nostalgia, children’s media and representations of gender on screen. She has published in Media International Australia, the Journal of Popular Film and Television, Celebrity Studies, the Open Library of Humanities, and is currently researching screen production culture in Australia.