In this post I examine the increasing trend of creating stop-motion films that metaphorically reveal the artificiality of the medium by exposing and dismantling the filmmaking process within the narrative. These are films that stage elements akin to a “making-of”, that is to that kind of documentary film that features the production of a film, «unveiling the raw materials and methods of the filmmaking process» (Lindvall & Melton, 1994: 65). And I suggest considering the text of these films as a paratext, due to the fact that it makes the spectator aware of details of the production process, and in particular of the acts of the puppets’ fabrication and manipulation, like an actual making-of. These “making-of” films have been defined “self-reflexive” narratives by Terry Lindvall and Matthew Melton in the article Toward a Postmodern Animated Discourse (1994), and “deconstructive films” by Paul Wells in the book Animation: Genre and Authorship (2002), because they «reveal the premises of their own construction for critical and comic effects» (Wells, 2002: 67).

This narrative technique originates from the field of theatre, where the first theorization was provided by Bertolt Brecht under the definition “alienation effect”. In the article cited above, Lindvall and Melton state that stop-motion is, by nature, an indirect form of self-reflexivity, because the films that employ this animation technique share a process of fabrication in the off-screen dimension that inevitably includes the puppet maker in each shot, and it seems that the invisible creator and the inanimate creatures interact (1994: 69).

I started thinking about this kind of narrative when I came across Christopher Kezelos’ short film The Maker (2010). The film is set in a fantasy world where a creepy anthropomorphic rabbit builds a similar creature that he brings to life with the sound of a violin. I was fascinated by the overlapping levels of narratives majestically plotted by the director. On-screen, the director shows in detail the process of puppet fabrication, and the protagonist performs the same actions as the puppet-maker in the off-screen dimension, outlining how and with which materials the protagonist was manufactured. As a spectator, I felt it was the making-of of the film I was watching. 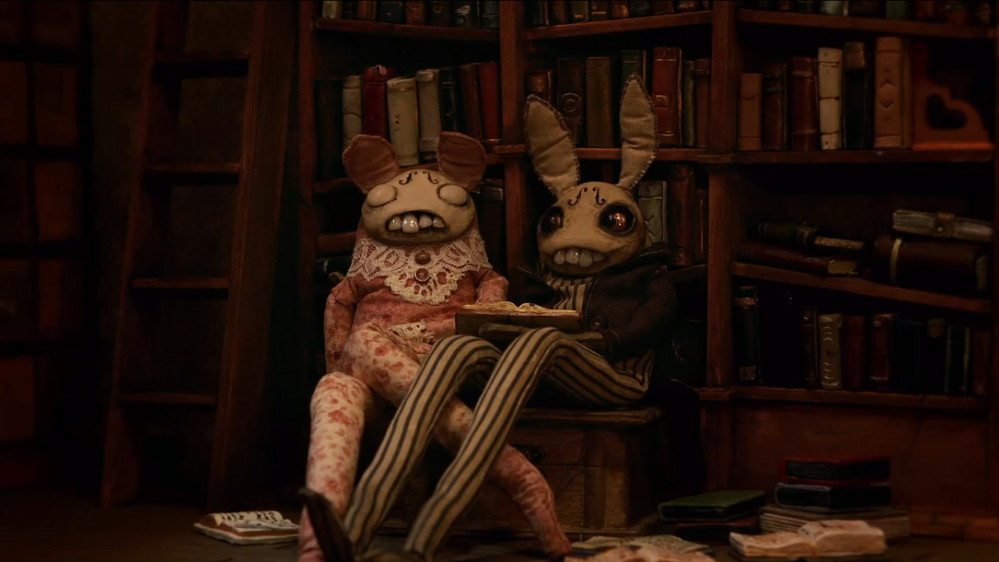 Examining the stop-motion short films produced in the last decade, I found numerous whose narrative is a “making-of” of the process of puppets’ fabrication and manipulation. These films stage puppets that either manipulate inert matter and “give life” to new puppets, or realize that they themselves are puppets controlled by someone else. In these stories, the manufacturing process is a relevant event of the narrative (sometimes the main on), and the stop-motion technique becomes a metaphor for the act of manipulation, in which the on-screen relation between puppet and creator symbolizes the real-world couple of puppet-maker and puppet.

In addition to the analysis that I conducted on these films and the formulation of hypotheses of classification based on sub-categories of self-reflexive narratives, I tried to answer the following question: why have the makers of stop-motion films felt the strong desire to metaphorically show the premises and technical details of their films, by creating narratives that reveal the illusion of the technique?

In order to find an answer to this question I interviewed several animators, directors and puppet-makers of some of the self-reflexive films I identified, and I expressly asked them what led them to produce films that stage “secrets” and technical aspects of the puppet animation technique, thus including paratextual elements in the text itself. Some of them considered this kind of narrative as a vehicle to show, teach and inform about the processes, documenting their ability to manage part of the process of film production. Others replied that they were fascinated by the idea of breaking the fourth wall and unveiling the backstage, taking advantage of its’ powerful narrative effect. I especially enjoyed two answers I was given. Both Dario Imbrogno, director of the short film Ossa (2015), and Michael Cusack, director of Sleight of Hands (2012), revealed a metaphorical use of this “scenic device” and considered the animation technique itself suitable for reflecting on the concept of constraints and the illusion of free will. Cusack told me:

I imagined a protagonist who felt that the choices he made were his own, only to find out that he was simply being manipulated by some other power and therefore had no free choices to make at all. […] The ultimate “creation” was a character that seemingly moves of its own volition, but is in fact manipulated by others in stop-motion (Cusack, 2017). 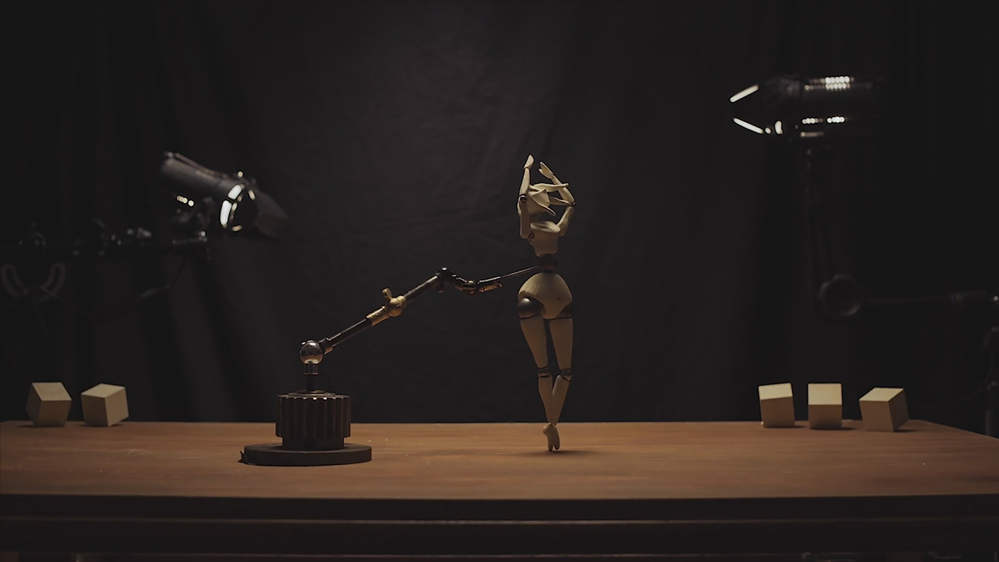 In his book Stop-Motion Animation: Frame by Frame Film-Making with Puppets and Models (2014), Barry Purves provides another possible justification of the trend of showing secrets of the animation technique itself as a profound desire to reflect on the relationship between artist and artwork, stimulating deep thoughts about life and art (Purves, 2014: 57). 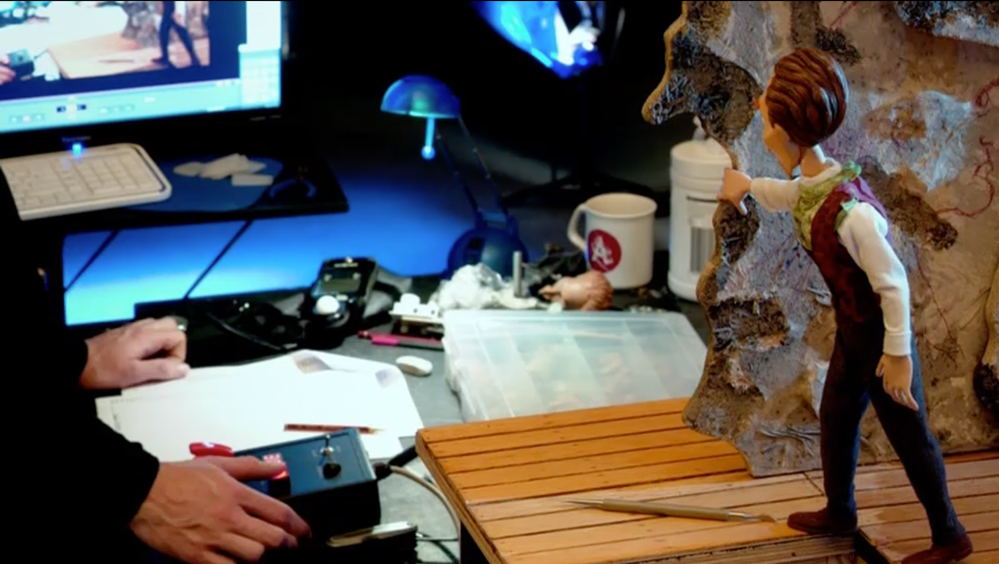 I want to conclude by providing a personal answer that I formulated by working as a puppet-maker and that is based on the emotions that this “act of creation” generated in me. I suggest considering self-reflexive stop-motion films as a form of narrative that reveals the puppet-maker’s need to create life by manipulating matter, trying to assume the role of demiurge, or, in a less alchemical perspective, a special artisan who gives the breath of life to something that is theoretically lifeless. In support of my claim is Maria Dima’s description of a ritual action that model makers perform before the sculpting phase in order to develop the intimate relationship with the puppet:

One of the first things that model makers do when they build the puppet is to position the eyes so that the puppet looks at them as they look at it. By doing so, they immediately establish an intimate relationship with the puppet (Dima 2011: 11).

Vincenzo Maselli is a PhD candidate in design at Sapienza University of Rome. His research aims to demonstrate how the material skin of animated puppets can communicate narrative meanings in stop-motion animation, by investigating building processes and material aspects in an anthropological perspective.

2 responses to “The Narrative of the “Making-of”: Self-reflexive Narratives in Stop-motion Film Productions”