From its very beginning in 1975, Saturday Night Live has always been an outlet for independently produced short films, but animation was not something the show’s producers had much, if any, contact with. If there was, it was acquired as an existing piece to air. It was not actually created and produced for the program. That all changed in the fall of 1996. We had produced a cartoon, itself a short interstitial standalone film, entitled The Ambiguously Gay Duo, that I co-created with SNL writer and producer Robert Smigel for the short-lived Dana Carvey Show. It concerned the heroic exploits of two comic book, Saturday Morning-type superheroes, Ace and Gary, who were Batman & Robin-like characters, but with villains that were more obsessed with whether or not they were gay than their dastardly exploits. After The Dana Carvey Show was canceled over the summer of 1996, Robert pitched the idea of doing a variety of cartoons like this to SNL creator Lorne Michaels. By September of 1996 we were in production on this series of cartoons dubbed, Saturday TV Funhouse. No one knew how many we would be doing, what they would ultimately be like, how long they would take or how much they would cost. It was all negotiated on the fly, on a per cartoon basis, but after the first two or three, we were able to come to a loosely structured agreement. They ranged from 1.5 to 5.5 minutes in length and the production schedule interestingly enough ranged from 1.5 to 5 weeks. I had recently switched almost all our production over to digital ink & paint, foregoing the traditional painting on acetate celluloid, shooting on 35mm motion picture film and finishing by transferring to videotape. This was a crucial aspect of being able to meet schedules and budgets. The other important aspect of our relationship was the fact that NBC covered us with total indemnification for the work we did. We created these cartoons exclusively from 1996 to 2000, and then intermittently to 2012.

In direct response to our SNL work, CBS’s The Late Show With David Letterman reached out in 1998 to have us create a short cartoon starring one of the program’s regular characters, stagehand Biff Henderson. We used a Hanna-Barbera Scooby-Doo-type scenario to showcase Biff’s imaginary exploits as a kid’s show detective who exposes the Dangerous Halloween Mummy as the show’s host, Dave. It was a one-off production and took about two weeks to design and produce. 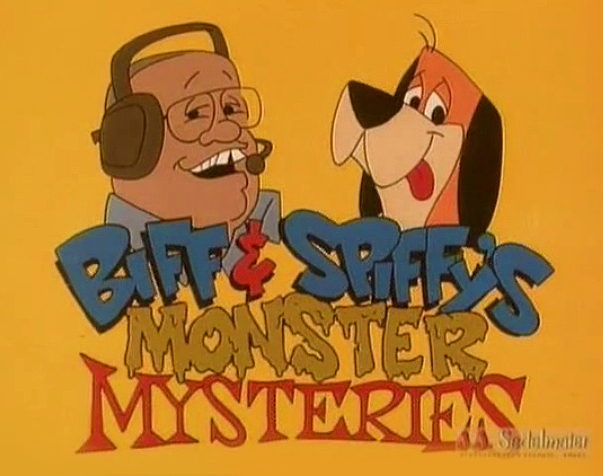 From the animation created for The Late Show with David Letterman

By the year 2000 we were riding the crest of both our commercial work and our cartoons for SNL. These productions were garnering awards and screening in festivals worldwide. Another phenomenon was taking hold as well: The Daily Show with Jon Stewart. Everyone in our studio loved the show and I reached out to the Creator/Executive Producer Madeline Smithberg and explained: “We love your show and seem to have very similar sensibilities. If there’s ever a concept you guys have that enters our realm of animation, please let me know. I’d love to work with you all!” In the fall of 2002 she did just that, and we were in production on a piece that aired several years in a row: Midterm Elections. It was a Schoolhouse Rock parody (our second – we’d done one for SNL a couple years prior) and I later found out that Stephen Colbert (who was the voice of Ace in the Ambiguously Gay Duo) had been instrumental in pulling us into this.

Our next project, consisting of In Show episodic animated cartoons, was the Tek Jansen/Alpha-Squad 7 series for The Colbert Report in the season 2007-08. This would be the 5th project I’d collaborated with Stephen on.[1] The show’s writers had created the ongoing science-fictional character, Tek Jansen, and now wanted to expand on the concept by producing a series of cartoons about him. We created the entire visual vocabulary from character design to the idea of a widescreen letterboxing format to lend an air of self-importance. We also produced posters and, later, an actual comic book was published.

Our final foray into animated segments created to run within a live action program was for USA Network’s Psych show in 2008. The program was a very popular series for the NBC owned cable network and the world of Internet social media was beginning. The programming executives wanted to expand the show’s reach in a viral way. I had several exploratory meetings with the creators and writers of the show and what began as an exclusively viral approach now became episodes produced to run on air within the show itself. We produced four two minute episodes, several 10 second promos/bumps and a 15 second TV commercial using the Shawn & Gus characters for Alltell Communications (see here for a more detailed description). 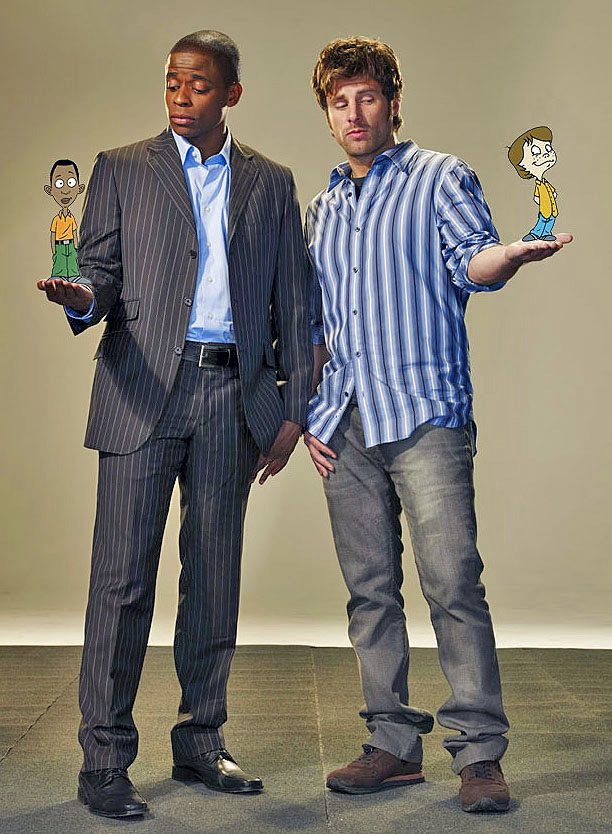 In each case, these animated productions did not conform to existing “industry standards” when it came to budget, schedule or even conventional production techniques. It was clearly to the advantage of all involved to avoid trying to adhere to preconceived notions of what needed to happen in order for cartoon series like this to reach their audiences. In the case of SNL, we had to sometimes revise parts of the production because of current events happening that directly influenced our content. Being nimble and resourceful was not only handy, it was essential. This also applied to our involvement in launching a groundbreaking series for MTV called Beavis and Butt-Head. This 1992 series was the first show produced by the famed music video network with all original material and was a cultural phenomenon. It employed digital technology before it was a standard for animated cartoons. It was also the very opposite of a live program with animated inserts – it was an animated program with live action inserts.

So why get involved in a production scenario that doesn’t pay what it should and works you to the bone? The answer is that you have an opportunity to build a fabulous showreel and a library of films that help define the type of work you like to produce. People see it can be done and come to you when they want to explore the possibilities in applying it to advertising, which usually has better budgets and schedules. It also inspires others to see animation as an entertainment tool beyond an audience of children. Finally, it gets you to perform under crazy circumstances that make you consider ways of making cartoons that you might never had considered. In other words, it keeps you nimble and an animation guerrilla.

[1] I brought him into the Harvey Birdman series for Cartoon Network/Adult Swim and we’d also done his Spartina production company title card that ends all his programs to this day.

One response to “Inbetweening the Live (Part II)”