So the Super Bowl happened again (I’m a Brit), and beyond the field-based drama, which lasted right to the end of the game this time round, with a spectacularly improbable catch setting up a dramatic final few seconds, the main talking points for many were the expensive adverts. So much so in fact that if you were also following the Super Bowl on Twitter it was often hard to distinguish which part of the Super Bowl experience carried the most impact. From my vantage point over in the UK, and separated from the US ad breaks, the Twitterstorm around the chilling Nationwide advert sent me hurriedly to YouTube in search of context.

With the global reach of the Super Bowl ads in mind, Margate-based animation studio A+C decided to set themselves a challenge. This challenge, described by studio founder and Creative Director, Dan Richards, was ‘to produce between 1-3 minutes of animation’, based on the adverts, and which would be completed, from initial ideas, through storyboarding, set building, animation, post-production, and final edit, within 36 hours – ‘a full out military operation involving thousands of Lego bricks’.

Riffing on the concept of the 48hr Film Project, but imposing an even more demanding production schedule, the enthusiasm generated during the build-up to this project resulted in A+C drawing on the talents of: 1 director, 1 animation director, 1 storyboard artist, 1 production manager, 1 producer, 6 stop motion animators, 6 model makers, 6 production assistants, 6 digital animators, 1 editor, 2 sound designers, and 1 voice over artist (in a sound studio in California). Having spent several hours at the studio, observing, and helping to find a Lego dog that went missing in the studio’s model making room (the irony of which was not lost on those involved in the search), the overriding feel of this project was one of a creative community coming together to work on a project out of their shared love for the animated form. 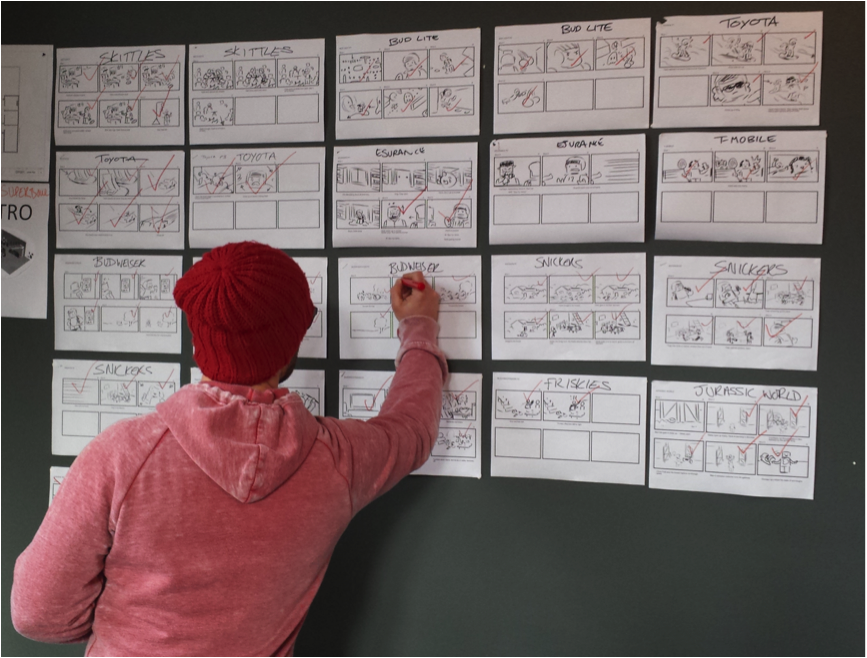 Dan Richards, director of the Lego-based short, marking up progress on the central storyboard.

Clearly this project has the potential to showcase A+C’s work, in a commercial context and working from a commercial brief in a roundabout way, but this was not the main motivating factor for those involved. As Stuart Clark, Head of Production, notes, ‘We heard that The Lego Movie trailer had been produced over a 24hr period, so, for us, the 36hr project was similarly about testing what we could achieve as a team, to a high standard, over a short period of time. Obviously stop motion is a slow medium, and when we told people about this they’d say “it can’t be done”, and we’ve always been about taking on challenges’. James Harvey, Lead Animator at the studio, adds that the communal nature of the project, with the strict time limit, ‘makes a nice change from the often isolated experience of animating in the stop motion form, with people working together to find creative solutions that might not normally have been considered if you were working alone’. 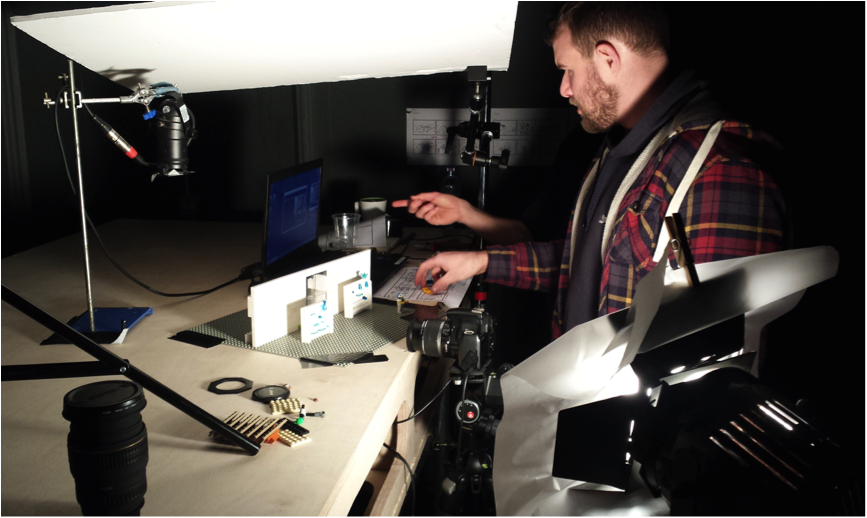 Head of Production, Stuart Clark, working on a setup.

Beginning with the first ad break at 11.30pm (GMT) on Sunday 1 February, and completing the project by 11.30 AM (GMT) Tuesday 3 February, working with Lego carried a number of benefits for the team. In terms of the storyboard work produced, the standardised construction of the characters meant that storyboard artist Josh Hicks could rapidly ‘cut and paste and scale’ character parts (heads and torsos) across numerous storyboard pages to quickly test ideas visually – which proved much quicker than having to plot ideas in script form. Once the animation production began, being able to work on Lego base plates proved instrumental in terms of being able to move quickly through each setup, without having to spend too long fixing each element into position. Even the production management benefited from the Lego treatment, with Production Manager Sim Bhachu creating a visual representation of the production schedule to help identify potential bottlenecks and hurdles at the outset. 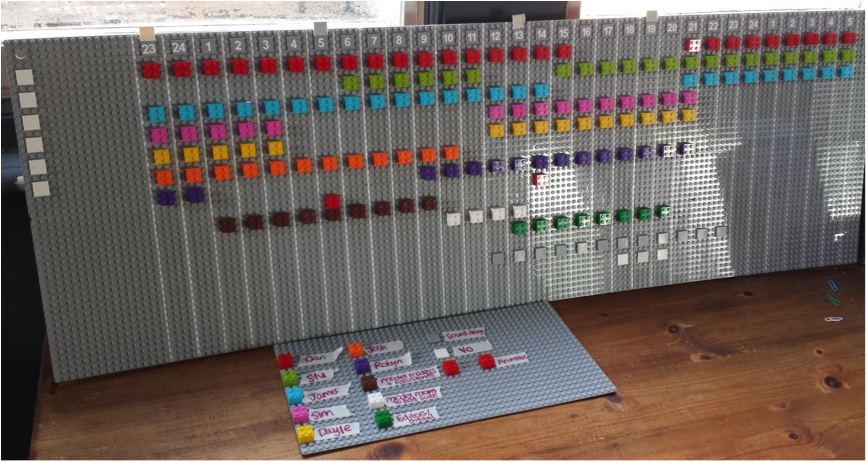 The many uses of Lego.

Having witnessed the energy and excitement generated amongst those working to deliver project, it is tempting to suggest that this might become a regular occurrence at A+C (and given the sizeable sum spent on Lego to support to the project, there is clearly an economic incentive to make the most of their new resource). However, a #BrickBowl2016 is far from a certainty, as the 36hr production cycle placed enormous physical demands on the crew involved. While other time-based animation challenges do already exist, such as the 11 Second Club, where the temporal challenge is framed in terms of the duration of the work produced, with the animators having a month between submission, by contrast, the appeal of the 36hr challenge is clear, and it is quite possible that other studios might be inspired to take up the mantle next year.

You can see the completed animation here.

All images were taken by Chris Pallant, but are provided with permission of A+C. Please seek similar permissions if you wish to reproduce any of these images.

Chris Pallant is Vice-President of the Society for Animation Studies and is Chair for the upcoming Society for Animation Studies conference, which will be held at Canterbury Christ Church University, UK, between July 13 – 16, 2015. He is the author of the books Demystifying Disney (2011) and Storyboarding: A Critical History (due late 2015), and the editor of Animated Landscapes: History, Form, and Function (also due late 2015). You can follow him on Twitter: @cjpallant