The Peanuts Movie (2015) appears to be somewhat of an anomaly amongst the wave of animated sequels, prequels and re-imaginings that have recently been released with major studio backing. Produced by Blue Sky Studios (20th Century Fox’s animation subsidiary), Peanuts possesses a corporate heritage that makes the already multi-sequeled Ice Age, Kung Fu Panda and Toy Story franchises seem positively new-fangled in comparison. However, despite its financial success, it does not seem like The Peanut Movie will be receiving a sequel in the near future, a relatively unheard of state of affairs for Hollywood’s reiterative production model. “This one took eight years, so maybe we’ll talk again then” stated Jean Schulz, widow of Charles Schulz: the creator of the Peanuts strip and arguably the most well-recognized comic artist of all time.[i]

Beyond the millennial success of many of its contemporaries, Peanuts appears to be playing the long game. As a 65 year old property that (even at its lowest earnings) reportedly generates 80 million dollars of licensing revenue annually, it’s in the brand’s best interests to remind twenty-first audiences of its commercial identity. Like Lucy collecting her precious nickels (“That beautiful sound of cold hard cash!”), it was undoubtedly a desire to reinvigorate the Peanuts Empire back to its billion-dollar-a-year heights that informed the decision to produce Charlie Brown’s first feature film in 35 years.[ii] Yet the reluctance to immediately capitalize on this success affords an interesting opportunity to problematize the seemingly binary relationship so often used to distinguish personal expression from corporate reiteration. As a major animated release, The Peanuts Movie must navigate the identities of both its conglomerate branding and the ‘auteured’ identity of Schulz himself: the man who wrote and drew every single strip throughout its fifty year history. Ironically, this necessitates chirpy and aspirational licensing campaigns to be led by child protagonists that are best remembered for their struggles with anxiety, loneliness and the bittersweet memories of youth.

Unlike artists such as Bill Watterson – author and artist of the celebrated Calvin and Hobbes strip – Schulz embraced the commercialization of his work. His expressive and melancholic vignettes seem tailor made for both industrial and artistic reiteration (Umberto Eco once described the strip as a microcosm of human interactions).[iii] Throughout their illustrious careers as mascots, Snoopy and pals have been transplanted onto everything from Sno-Cone machines to Japanese restaurant guides. The Peanuts Movie builds upon the foundations of this history, in particular, through the wealth of animated adaptations that have already been made for the screen. This new feature acts as a direct descendent of the Emmy and Peabody award winning A Charlie Brown Christmas (1965), a film that cemented Peanuts’ popularity by successfully commingling the series’ simultaneous acceptance and resistance to the standards of commercialisation.

Despite studio opposition, A Charlie Brown Christmas features the ever-sincere Linus reading a passage from The Gospel of Luke, whilst Charlie Brown himself rails against the corporate nature of the Holiday season: ‘My own dog gone commercial. I can’t stand it!’ he wails when discovering the impressive display of Christmas lights adorning Snoopy’s kennel. But if Charlie and Linus represented Schulz’s frustration with the secular commercialisation of holiday festivities, then Snoopy’s ability to embrace the glitz and glamour of modernisation was a source not only of envy, but also admiration. Making an indelible impact on American pop-culture and exploding the brand’s popularity, the Yuletide special forged new-found relationships within media cross-promotion and licensing. 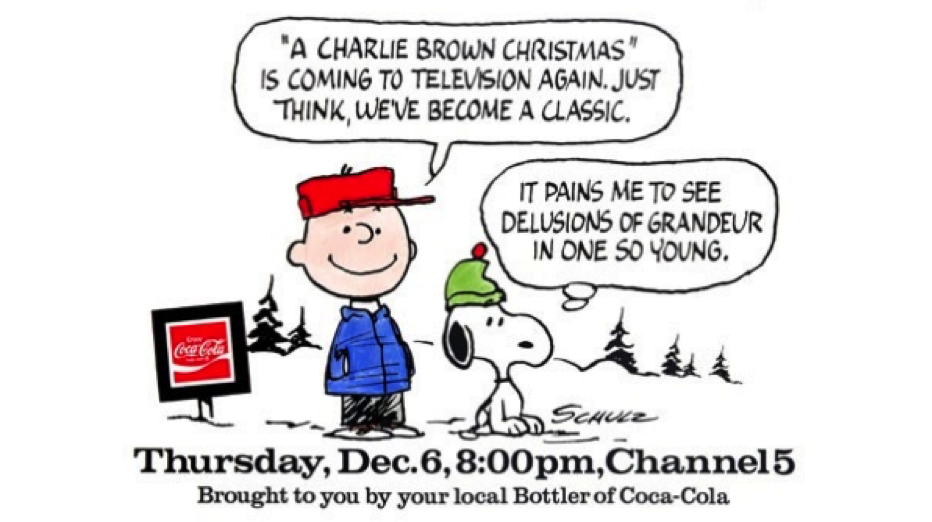 In 2015, The Peanuts Movie possesses a similarly contradictory identity. The film’s characters may populate a contemporary America rendered in three dimensional CGI, yet there are no signs of millennial technology to be found on-screen. The cinematography adopts a strictly two dimensional perspective that holds Schulz’s line-work as its aesthetic lynchpin – only ever deviating within Snoopy’s literal flights of fancy as the ‘World War I Flying Ace’. As ‘Joe Cool’ too, it’s this mercurial canine who willingly embraces the excesses of filmic spectacle. His round-headed owner remains ground-bound, perpetually resistant to the pleasures of modernity. 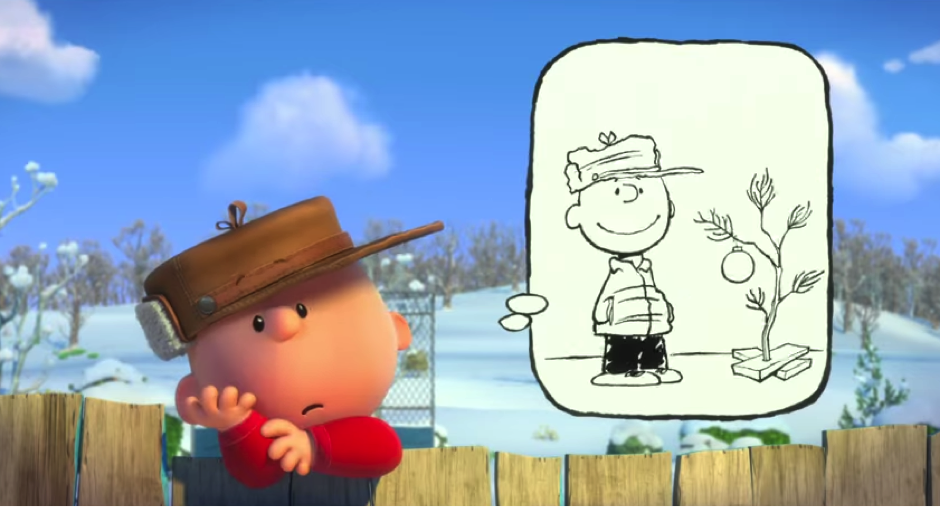 The Peanuts Movie may cling to Schulz’s oeuvre with the same obsessiveness with which Linus grips onto his trusted blanket, but its backwards-looking nostalgia pays homage to the many artists and craftsmen who cemented its animated identity. In particular, Steve Martino’s direction owes a great deal to the cultural nostalgia for the advertisements and award-winning shorts helmed by Bill Melendez and his production company. The film’s familiarity draws upon a number of aesthetic cues from these earlier features – including Snoopy’s surreal aerial escapades and the children’s unforgettable dancing. The decision to retain Melendez’ vocal performance as Snoopy and Woodstock foregrounds The Peanuts Movie’s particularly posthumous and memorial identity.

If it was Melendez who filled in the frames that lay between Schulz’s four-cell newspaper strips, then it was musician Vince Guaraldi that defined their sound. Schulz may have allied himself with Schroeder’s love of all things classical, but Guaraldi’s off-beat jazz managed to translate Peanuts’ buoyancy and sophistication into a unique musical identity. The Vince Guaraldi Trio’s ‘Linus and Lucy’ is utterly synonymous with the Peanuts branding – a fact that composer Christophe Beck acknowledged by reworking it as a central theme within the 2015 production.

With a script co-written by Schulz’ son and grandson (Craig and Bryan Schulz, respectively), The Peanuts Movie is a definitively hereditary text, redefining and reinventing its predecessor’s work for a new audience and ever-changing market. When Lucy uses the ceaseless repetitions of television as an analogy for having two male siblings, Linus dubs his younger brother with the title ‘Rerun’. Like the youngest addition to the van Pelt household, The Peanuts Movie appears to be one of the most obsessively nostalgic texts amongst its peers. Unlike the ‘minions’ that have been invading our multiplexes, Peanuts is being redrawn for a generation who have more familiarity with the brand than they do the source itself. Yet the fires of this property can afford to be slow-burning. It is perhaps this fact that makes The Peanuts Movie’s production and release so intriguing. The requirements for a sequel seem both unsustainable and unnecessary. The franchise has a narrative that resists the development of tradition as much as it does the ageing of its characters.

Its box-office success acts more of a reminder to consumers of its media presence: a claim to cultural memories of childhood neuroses and a societal desire to hold modernity at bay. This millennial iteration might have had its venom removed (the youths in Schulz’ strip represented an unbridled cruelty absent that is now noticeably absent) but there have been no major advances or overhauls in the life of this perennial Blockhead. The film may end with the object of Charlie Brown’s affections (the Little Red Headed Girl) responding to his admiration as she leaves for the end of the school year, but it is unlikely that a sequel will see her return and become his companion. The cast of Peanuts exist in transition. Whether we want to dismiss the property as an enterprise in Hallmark platitudes or a mythology of insecurity – Peanuts’ ongoing cultural and corporate endurance is reflected in its minimalistic reconstruction of a childhood without end.

Robbie McAllister completed his PhD at Aberystwyth University. His thesis evaluates the steampunk movement’s impact on contemporary cinema, and his continued research questions the ongoing popularity of neo-Victorianism within pop-cultural media. He currently lectures in Film History and Film Theory at Staffordshire University.