Not long ago I happened upon an original Reynaud praxinoscope for sale in a shop in Paris. Unable to justify its asking price, I began to research more affordable alternatives to share with animation students with whom I have made countless zoetropes, phenakistiscopes, thaumatropes, and flipbooks over the years. I have observed that studying and building variations of early optical toys with them helps clarify essential perceptual, scientific, and philosophical ideas. It was during this search for a less-expensive alternative to the praxinoscope that I rediscovered Red Raven Movie Records. 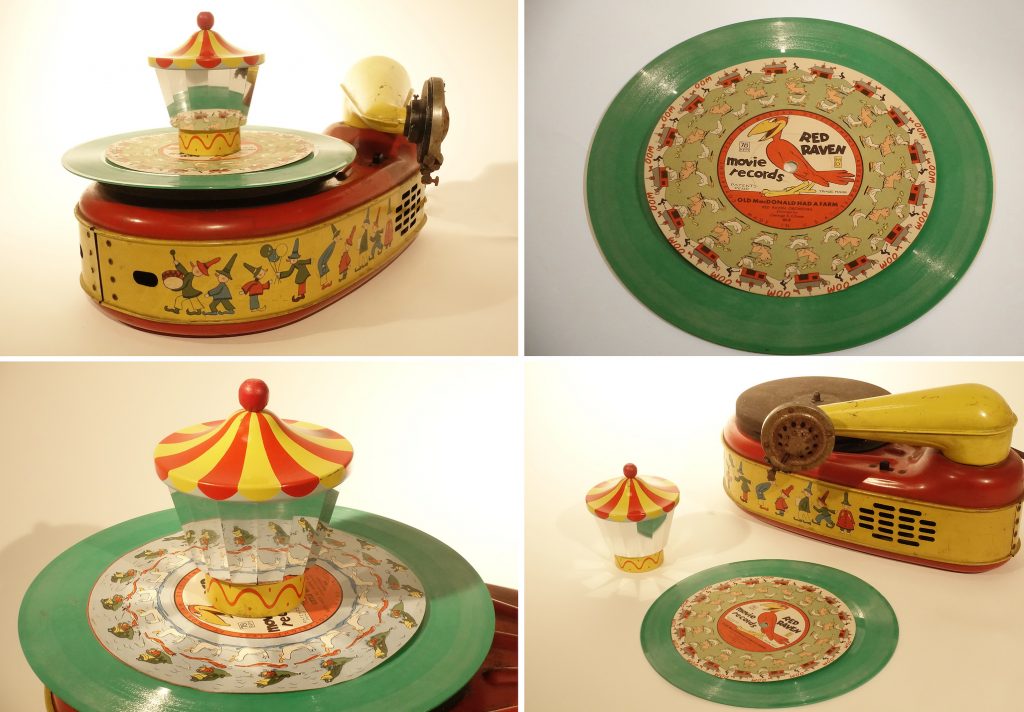 Red Raven Movie Records were manufactured in the United States by the Morgan Development Corporation during the 1950s. Based on Reynaud’s praxinoscope, they employ a system of rotating mirrors to reflect sequences of images fixed to a 78rpm record. When the record is played, spritely animations that correspond to music dance effortlessly before the viewer. Their delightful simplicity makes clear at the granular level the illusion at animation’s core and provides a basis for discussion.

Students were especially intrigued by the records, reporting that the experience seemed “much more interesting than what is on the screen.” Many commented that the “illusion is charming and immediate— as opposed to the digital,” but I did notice that most raced to get their cell phones out of their pockets to record this optical toy—essentially a praxinoscope set to music—so that they could post on social media.

As Machiko Kusahara observes, the concept of pre-cinema is a “…misnomer, for such devices were still used as toys after the cinema had made its breakthrough”[1]. Studying such devices is not merely about learning animation’s history. By examining early scientific and philosophical approaches that reveal the workings of human perception, students can begin to extricate their conception of animation from its marketplace implications and stylistic tendencies (at least for a moment), and focus on the importance of the formal and perceptual conditions that make the illusion work. In doing so, they can perhaps begin to imagine new applications and modes for the basic illusion.

For example, as a simple thought exercise, imagine a definition of animation that eschews the embedded imagery of its product and methods over the last century and instead prioritizes animation’s opportunity to explore the invisible, time, philosophy, the synesthetic, and what Merleau-Ponty called the “phenomenology of perception”[2]. Then, imagine the challenge of communicating this new prioritized definition to students who are often brought up on Miyazaki, Disney, and other commercial manifestations of the commoditized form and who are likely present in animation classrooms precisely because of their devotion to these products. Herein lies a challenge; but in the challenge there is also an opportunity.

The roots of animation are embedded in some of the most fundamental questions of human existence. Ancient, proto, and pre-cinematic devices attempt to illuminate concepts such as life and death, mythologies, causality, being and non-being, the visible and invisible worlds, beauty, and the origins of creation itself. Contemporary animation’s precursors seem to ask the question—with all of its implications—what is mind, what is body, what is time, what is life, and can the human animal recreate these things?

This thought exercise does not imply that the current state of the industry is any less important to animation education than a philosophical approach. Instead, an alternative approach simply provides balance to the hegemony of commercial application and suggests that there is great value to arts and sciences in embracing a study of a philosophy of animation, and philosophy through animation, by means of an excavation of animation’s histories, perceptual trickeries, motives, mythologies, and pre-cinematic attempts.

Fig. 2. An investigation of the workings of zoetropes and similar optical devices can serve as an important point of discussion with animation students.

In addition and importantly, a study of animation through a pre-cinematic lens can make concepts accessible to students from diverse economic and social backgrounds, as these so-called philosophical toys generally do not require expensive technology and can be crafted from easily found materials. Flipbooks, zoetropes, phenakistiscopes, and thaumatropes are all excellent vehicles by which to quickly initiate interdisciplinary discussions of perception, meaning, reality, scientific inquiry, representation, mortality, art, and philosophy with animation students.

Red Raven Records and early optical devices provide a very important entry point into discussions with students about animation’s possibilities. Studying such devices reveals the core perceptual secrets of illusion and, I’d argue, its philosophical opportunity. To understand this illusion and to perhaps move it forward means that animators might do well to revisit the scientific and philosophical foundations of the form and attempt to excavate the formal principles of movement, time, and the perceptual conditions that constitute the illusion of movement. Zoetropes, phenakistiscopes, praxinoscopes, and even Red Raven Movie Records centrifuge the spectacle into its essences. They provide an important basis for discussions not only about animation’s history, but also about its future.

2 responses to “Pre-Cinema in the Classroom: The Philosophical Opportunity of Red Raven Movie Records”