Last year at about this time (which is last minute by most measures) I was asked to Chair the SIGGRAPH Asia Art Gallery. Having successfully Chaired and organized the Educators Programme at SIGGRAPH Asia in 2008, the inaugural launch of the ACM SIGGRAPH Conference in Asia, the organizers thought that I would be a safe bet on this year’s Art Gallery. With the Art Gallery having shrunk in the past year due to various detractors they hoped that I could bring back some of the former luster that the programme had back in 2008 & 2009. The inaugural SIGGRAPH Asia was chaired by Tomoe Moriyama, currently a curator at the Tokyo Contemporary Museum of Art, a tall order to try to accomodate. Fortunately she is a friend and confidant of whom I was able to rely upon if needed. Not being one to turn down great opportunities to meet new people and take on new challenges I accepted. 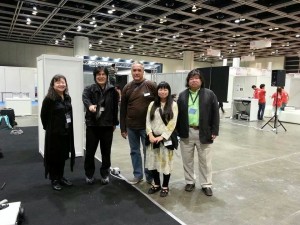 In addition to the Art Gallery, I thought that the occasion would be a great opportunity to organize something new, so I proposed an Art Papers section, something where computer scientists, researchers and artists alike could show work that is of a more theoretical nature and where we could possibly discuss some of the issues raised by the progress of technology and its influence on the creative expressive sphere. The culmination of these efforts closed just this past week having “wrapped” on the Friday the 22nd of November. It was a great experience and opportunity to meet experts in the field and reacquaint myself with friends from a few years back like Tomoe Moriyama who I invited to curate a work into the Art Gallery Exhibition, the Computer Animation Festival Chair Jenny Choo, Featured Sessions Chair, Sophie Revillard and Technical Papers Chair Alyn Rockwood.

Some highlights from the Art Gallery that are of note and that build on my call Future/Past can be most clearly expressed by the juried works accepted. For instance a performance work brought in by Tatsuro Kudo engaged the audience through its dynamic generation of real time animation mapped onto moving objects and dancers. The result was a celebration of life in the present moment, with generated music and animation projected and tracked on dancing forms, young male dancers politely dressed as salary men, carrying the screens where imagery was projected and somewhat reminiscent of briefcases. Another work by Singaporean based artist Ina Conradi-Chavez in a commemoration called Mise en scène: Elysian Fields to her father, poetically explored the convictions that he faced upon the beginning of WWII as a young man and was compelled to go to war.

In an invited work brought to the show by curator Tomoe Moriyama called Scanning the artist Professor Hideyuki Ando of Osaka University used about twenty scanners recovered from the Fukushima earthquake and natural disaster. The scanners were linked together, after scanning a barcode representative of a victim of the disaster the lasers projected 20 lines of light where the names of victims projected a barely visible representation of their names in a poignant tribute to their tragic passing. Another highlight was the Augmented Reality Public Art Installation by curator Arthur Clay of DAW International. Still on display it uses the application Layar to show artworks by a number of different artists. The works are held in permanent installation for public viewing in Hong Kong.

In the Art Papers session, a newly launched program for SIGGRAPH Asia, 9 peer reviewed papers were presented and discussed. Though generally speaking less theoretical than what is presented at the Society of Animation Studies, these papers examined various topics such as a methodology for brain based interfaces expressing predesigned art and “Chi”. Others examined the technical aspects of generative design that used rules created by the abstract artist Wassily Kandinsky, and others explored the impact of automated poetry, the visual poetry of automated eyes and real time virtual characters in installation based artworks.
Close to 200 artworks were submitted and with the help of 18 jurors, 15 were selected for display with a large number of works coming from the Asia and the Asia- Pacific region. The Art Papers, a new program at SIGGRAPH Asia, had a smaller selection of submission though were also peer reviewed. Nine were chosen for presentation. All will be included in the ACM SIGGRAPH Digital Library for later reference. With much of the technology behind the research developed to a point where the expressive content is more easily accessed, the works displayed in the Art Gallery at SIGGRAPH Asia 2013 focused more on meaning than craft. Trends point to more expressive imagery developed by talented artists from all over the world.

Currently at a research university in Singapore, I teach Digital Sculpting and 3D Production for cinema and game development. I also lead a small team of researchers on a project that is called, “Game Design for Entertainment: a content development think tank”. Exploring content development for Transmedia Entertainment, our research attempts to understand the qualities that form comical appeal in simulated intelligent characters. This work is funded through the National Research Foundation in Singapore. I recently Chaired the Art Gallery and Art Papers Chair for SIGGRAPH Asia 2013, I also organized the SIGGRAPH Asia 2008 Educators Program during the inaugural SIGGRAPH Asia held in Singapore.

Prior to my current academic position I worked at major studios in award winning interactive media and games, television and feature films with more than 25 studio based interactive projects, games, animated feature films and live-action visual effects movies to my credit. Although early in my career I directed animated shorts that were projected in laser light, my animation movie directing debut is with the animated movie [Vengeance+Vengeance]. It was executed as part of a larger research project titled “Cinematics and Narratives: creating stories within real-time visual toolsets.” Currently in the film festival circuit. The movie is winning numerous awards. http://vengeancevengeance.com/movie.html