When I taught my module on the History and Theory of Animation to my final year undergrads at the University of Surrey last semester I was really looking forward to the week on representation of gender. I’ve taught this class several times before and the week’s scheduled student presentation on Disney princesses usually leads to a lively discussion. I wasn’t disappointed in terms of the level of participation in the discussion, but I was really disappointed for other reasons, and this is why…

The presentation sessions in my module are entirely student-led. I try to stay out of it as much as possible, sometimes chipping in something to the discussion at the end so long as I feel I won’t railroad things or disempower the student-as-teacher model of these sessions. But this week I could barely contain myself from exploding. For the most part, the discussion had taken the predictable route – students had talked about their own childhood experiences of watching Disney and their love (or loathing) of the princess character. Some interesting avenues had been explored, including the evolution of the princess and whether or not the (in many cases equally as stereotyped) male characters were as problematic. The class has a relatively equal number of male and female students in a small cohort who have known each other for three or four years, so discussion was relaxed, supportive and productive.

But, things took a strange turn as students talked further about the negative aspects of the gender stereotyping of the princesses. The female students in particular seemed to be grappling with their brain vs. their heart. They all agreed that the princess was a negative stereotype, particularly in the older films. However, they then began to question whether that was problematic. They had all grown up watching Disney movies, loving Disney movies and loving Disney princesses. These characters are deeply nostalgic for them. And they were clearly finding this hard to reconcile with their intellectual recognition of issues of gender representation. It was when (a female) student said something along the lines of ‘but what does it matter? These films are just for children! What harm can it do?’ that I could no longer contain myself. ‘Have we taught you nothing?!?’ I yelled, to my students’ apparent surprise, before launching into an impassioned rant about exactly why it matters, and matters very much, what young girls are taught to aspire to by popular culture.

*Sigh* My students are a smart, articulate and energetic. The female students are confident. But it seems that while they may fully appreciate the profound insight of the cartoon below, they can’t shed that nostalgic princess dream. I love Snow White for so many reasons, but I’m already wondering about when, and how, I’ll show it to my little daughter. Maybe I’ll just make sure I have one of the brilliantly-sloganned ‘This princess saves herself’, or ‘Why be a princess when you can be a president?’ A Mighty Girl t-shirts to hand when I do. 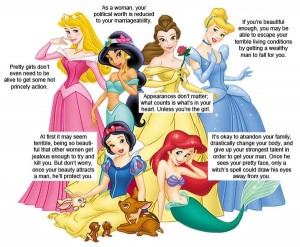 Bella Honess Roe is film scholar and lecturer who specialises in documentary and animation. In 2013 her book Animated Documentary, the first book-length study of the animated documentary, was published by Palgrave. She has published articles and chapters on topics in animation, documentary and film studies more broadly in publications including the Journal of British Film and Television and Animation: An Interdisciplinary Journal.

She is co-editing a collection of essays with Maria Pramaggiore on ‘documentary and the voice’, which will also be the focus of a symposium in September 2014 at the University of Surrey. She is working on various other research projects, including factual play in the collaborative work of Michael Winterbottom and Steve Coogan, a project on Aardman animation and another one on the visual culture of the invisible. She teaches in the Film Studies programme at the University of Surrey, UK, and blogs occasionally about her research at http://bellahonessroe.wordpress.com.

9 responses to “Disney Princesses…What harm can they do?”