At this point, it’s clear that animation and video games go hand in hand. Even when a game attempts to dive as deeply into the Uncanny Valley as possible – as with Remedy Entertainment’s recent release, Quantum Break – it can’t escape the animation process. However, this does not stop game developers from doing everything they can to blur the line between their pixelated world and the flesh and blood world of reality. What’s more, it’s this blurring between worlds that drives the technological advancements in video games today, be that through new developments in VR technology or continued efforts to create a live action game. So it worth noting that, as gaming and animation in video games evolve, as the medium strives more and more to reach the absolute cutting edge, there are still those game developers that look back in time for inspiration. Canadian brothers Chad and Jared Moldenhauer are such creators, and their debut game, Cuphead, due for release in 2016, is a modern throwback to animation’s early history.

Cuphead is best described first and foremost as an attempt to bring the absurd and phantasmagoric animation of the Fleischer Brothers to a modern audience. The Moldenhauers grew up on the Fleischers’ early Betty Boop shorts, preferring their (and other cartoons from the 1930s) “creepy” and “surreal” style, where “a character [goes] from super happy to just insane and showing his gums like a wild dog because he wants a piece of candy,” or where a knife comes out of a wall, develops a mouth and teeth, and begins biting Betty’s dog friend, Bimbo, to the canned animation and narratives of the cartoons available in the 1980s, like Thundercats or He-Man: Masters of the Universe[1]. Indeed, the Moldenhauers’ plot centers on the anthropomorphic Cuphead and his brother, Mugman, who make a bet against the devil and lose, forcing them to do his demonic bidding.

Reading interviews with the brothers, it’s clear that they are plugging into a powerful sense of nostalgia for a “dying” form of animation, then using that nostalgia to fuel the creation of their game and subsequently sell it to their eager audience. The game’s official website proudly advertises the game’s older animation techniques, noting “the visuals and audio are painstakingly created with the same techniques of the era, i.e. traditional cel animation (hand drawn & hand inked!), watercolor backgrounds, and original jazz recordings”[2]. The brothers are also limiting themselves to a frame rate of 24 frames for the game’s animation, largely because that was the “historic cinematic” rate and because they “believe that 24 frames per second adds to the surrealism and the fantasy of movies”[3]. Yet their dedication to reviving the techniques and look of 1930’s cartoons goes much deeper than hand drawing and inking or specific frame rates. In an interview with redbull.com, Chad Moldenhauer states, “We are trying our best to ensure everything fits within the guidelines that were set in stone by the studios back then…Things like pupil shape, expressions, rubber limbs, timing of cycles and motion lines are always cross referenced [with the original standards] while we are animating, so Cuphead really feels like the designs and animations were made in the 1930s.”[4]

It’s not just a sense of nostalgia that fuels Chad and Jared Moldenhauer’s passion for this game. It seems they also see themselves as conservationists in world where 3D animation is favoured over 2D animation. According to Chad, 2D animation “isn’t being taught in a ton of schools like was 20 or 30 years ago. So it’s a dying art, and there needs to be a resurgence before you’re going to see a lot more of it”[5] He goes on to say, “The old Disney was art for art’s sake, you know, and let’s push art. And then the corporate mentality comes along and establishes that this is the only way to keep growing and earning more money. But you do that while stepping on everyone else.” Here, Chad frames himself and his brother as underdogs – a role appropriate for the Indie gaming scene – as they struggle against corporate 3D animation and fight to save the old 1930’s animation that they love.

As animation in gaming becomes more and more cutting edge, delving deeper into the Uncanny Valley and blurring the lines between virtual reality and our reality, games like Cuphead occupy a noteworthy and important space in gaming animation and its history. People are nostalgic for a weirder, simpler time and, even though they may not know the Fleischers created Betty Boop, this updated throwback to their work feeds that nostalgia in a way that is wholly new and unique. 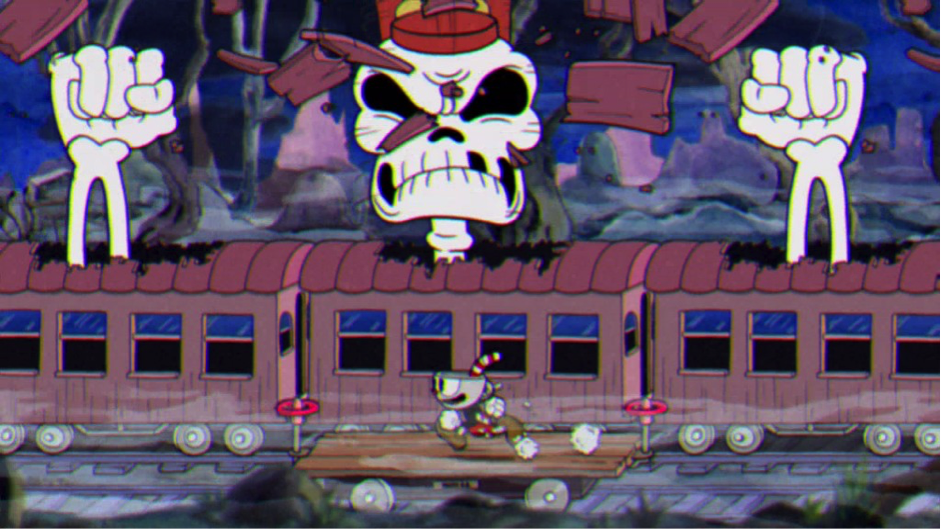 (from http://studiomdhr.com/cuphead-coming-in-2016-exclusively-to-xbox-one-and-pc/)
A scene from Cuphead or a Fleischer Brothers short? If Cuphead wasn’t in the picture it would be hard to tell!

[3] Although, they are limiting the animation to 24 frames per second, the actual gameplay will run at 60 frames per second to make the game play more responsive. http://time.com/4123150/cuphead-preview/