Silent Signal is devised and produced by Animate Projects with scientist Bentley Crudgington, and is supported by a Wellcome Trust Large Arts Award and the Garfield Weston Foundation. The idea was to create a group of thematically interlinked but distinct pieces of animated moving image that used current science research as a starting point to investigate, interrogate and transform.

Having written my PhD thesis about using a collaborative methodology to document neuropsychological brain states I was keen to test out the same methodology in a different context. For this project I worked in collaboration with Serge Mostowy, a Wellcome and Lister Fellow at Imperial College London, doing research into sub cellular septin cage assembly triggered by the shigella pathogen using a zebra fish model (as discussed in my previous post, ‘Secret Architecture – the construction of Loop’, Animation Studies 2.0, March 2014).

The first thing to strike me about Serge’s lab was their diversity; at the time they were a group of researchers from Canada, Italy, Spain, Germany, Malaysia and the U.K. They encompassed a range of perspectives from undergraduate to post-doctoral, and backgrounds from aquaculture to biochemistry. I began by presenting them with a case study of a previous project I had done (working with archaeologists https://vimeo.com/51136309) so that they would understand and be available to participate in the methodology I would be using (lots of conversation and collaborative visual work). I also ran a workshop on pre-cinematic animation with them using praxinscopes and zoetropes so that they could experience the process of making animation themselves. 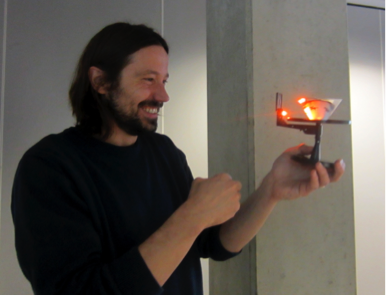 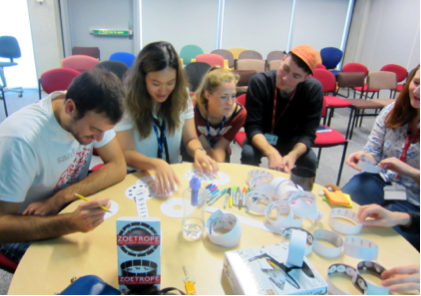 During my initial discussions with them it became clear that the science was incredibly dense and complex. The background reading of the subject I had done only took me so far; each project was original research testing new theories and ideas. In frustration at my own inability to fully understand, and to try and get a visual handle on it, I asked them individually to draw their research in my sketchbook. Their imagery was surprisingly idiosyncratic, and represented their subjective perspective of the research field. There seemed to be less visual consensus than there was verbal (perhaps because they were not routinely using drawing as a communication tool in the lab), and the process of drawing their internal imagery of their research process allowed me to unravel each person’s perceptions more easily than conversation had done.

On my next visit I took more art materials and larger paper to allow them to develop and expand on their visual explanations. Based on these drawings and recorded conversations with the lab members I began to animate each persons’ depictions, and the ‘collaborative cycle’ of animation, discussion and amendment began, culminating in the final work. 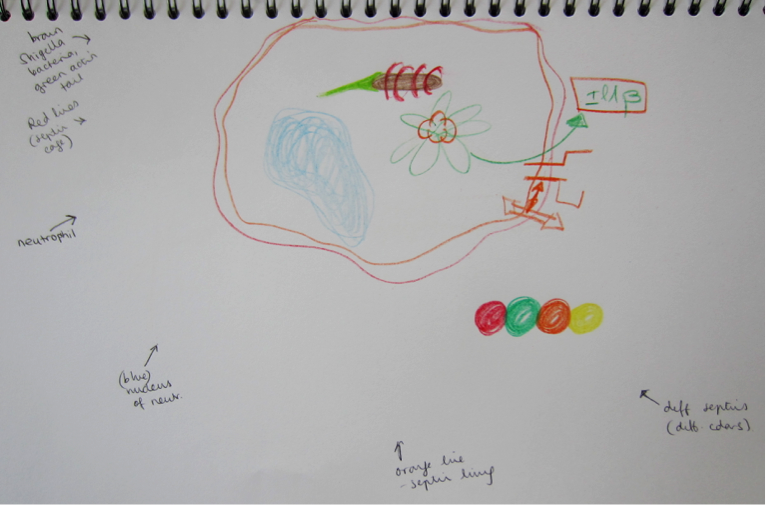 Because of the original nature of the research some of the imagery inevitably changed over the two years of the project. There were breakthroughs and discoveries along the way, and differences of opinion between scientists. The revision and discussion that these engendered were included in the film as an important marker of the collaborative, creative and discursive nature of science.

Samantha Moore is an international award winning animated documentary maker based in Shropshire. Amongst her awards is one ‘for Scientific Merit’ from the journal Nature (New York, 2010). Sam is passionate about the ability of animation to convey reality in new and surprising ways and has completed a Ph.D. (2015), about the way animation can document perceptual brain states, supervised by Paul Wells at Loughborough Animation Academy.

Sam has made several international award winning short animated documentaries animated, including; Success with Sweet Peas (2003), doubled up (2004), The Beloved Ones (2007), An Eyeful of Sound[1] (2010), Shadow Stories (2013), and Loop (2016) for Silent Signal, an Animate Projects commission funded by the Wellcome Trust and Garfield Weston. She is currently working on a new project for TV and is a senior lecturer in animation at the University of Wolverhampton.

[1] An Eyeful of Sound (2010) is now used at Yale University, USA and at the Max Planck Institute for Psycholinguistics in the Netherlands to help students understand how synaesthesia is experienced.

One response to “Loop: A case study collaborating with scientists for Silent Signal”