In June of 1985, creative visionaries Hayao Miyazaki and Isao Takahata joined forces with producer Toshio Suzuki to create what would later grow to be one of Japan’s most highly established and globally admired animation studios. This studio, Studio Ghibli, has dedicated the past three decades to creating some of the most beloved animated works of contemporary world cinema [Figure A]. 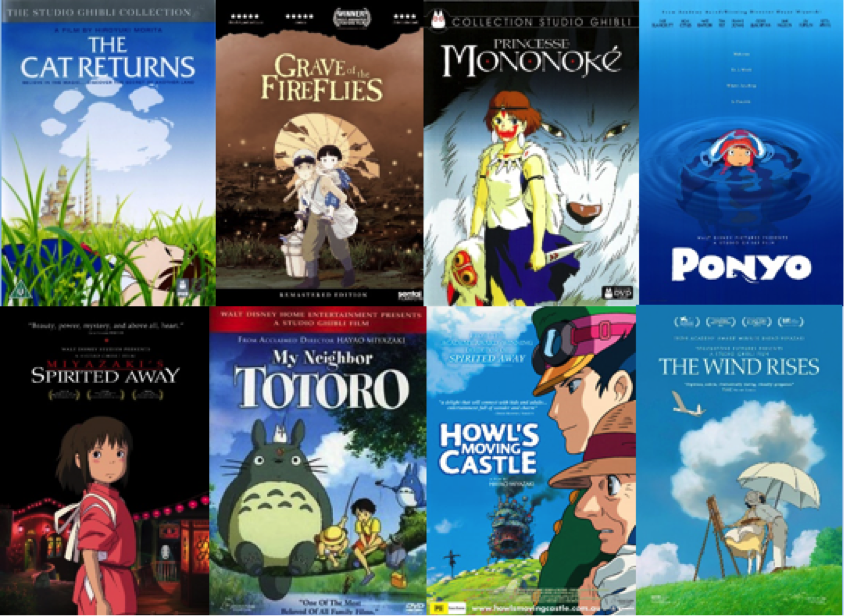 In 2008 Studio Ghibli began collaborating with Level-5 games to develop artwork for Ni No Kuni: Dominion of the Dark Djinn, a Japanese Role-Playing game for the Nintendo DS which would later be released in 2010. In 2011 a rebooted version of the game was released exclusively for the PlayStation 3 in Japan which would later be released throughout North America, Australia and Europe in 2013. This revamped version of the game was entitled Ni No Kuni: Wrath of the White Witch and interestingly seemed to embrace its cinematic influences. However, Studio Ghibli influenced the game to a much greater extent than simply its animation style and creative process. Akihiro Hino, President and CEO of Level-5 games, has even stated in interviews that, with the help of Ghibli’s producer Toshio Suzuki, his company were intent on;

‘Conveying the Ghibli experience properly. We researched their animated films quite thoroughly … We were determined to feel the Ghibli world in our bones rather than simply experiencing it with our eyes. It would make us very happy if our fans are able to sense the expression of Ghibli throughout the game’[1].

It appears that the contributions of Studio Ghibli have assisted not only in attracting fans of the franchise to invest time and money in a product developed for a new media platform, but have also aided in creating a new generation of JRPG which embraces it’s cinematic influences and implements them in such a way that creates a truly successful hybrid trans-media aesthetic. As well as merely incorporating anime cut-scenes constructed by the studio [Figure B] the game also pays homage to Miyazaki’s filmmaking by encompassing hundreds of inter-textual references to the Ghibli universe.

Figure B: A selection of stills taken from some of Ni No Kuni: Wrath of the White Witch’s cut-scenes.

The game even incorporates a quest which I feel interconnects the entire Studio Ghibli franchise, as well as linking the two media platforms [Figure C]. This quest intersects three kingdoms, which already reference particular Ghibli films as well as representing traditional JRPG environments, to each other. These kingdoms each pay homage to instalments of Ghibli’s cinema, and by adapting their premises to function as game locations, the locations (and hence, the films) can be linked by quests and objects. The object being a clarion in this case, in which all three kingdoms must contribute something to its construction to signify the unification of the locations, the two different media platforms and the game with its ‘ancestral cinema’.

By ‘ancestral cinema’, I am referring to the animated films which have particularly influenced these fictional in-game settings. Both locations and media platforms are also linked through the incorporation of lengthy, animated cut-scenes that occur within all three kingdoms. These traditional anime clips inject rare, yet eagerly anticipated instances of the passive medium of cinema into an otherwise interactive digital platform. As a result, the films then all link to each other via this neutral universe belonging to a product of a different media platform. 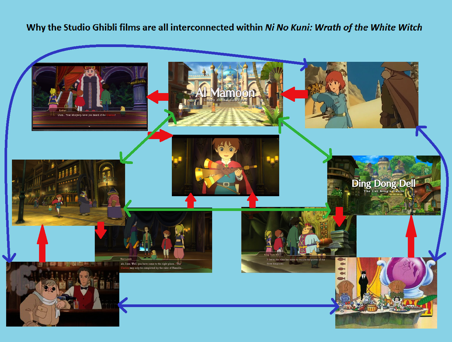 Figure C: A diagram showing the ways in which traditional JRPG game locations (green arrows) and Studio Ghibli’s cinema (blue arrows) can be linked via Ni No Kuni, whilst also exhibiting how all elements are linked via a quest within the game (red arrows).

Georgina Brown is a doctoral student of Film Studies at the University of Southampton researching the cross-media aesthetics of Studio Ghibli. Her key area of study being the films of Hayao Miyazaki, but she also has an interest in Asian cinema, global animation and video game adaptation.