If, as I believe, Art is a never ending search for the elusive real, there are many ways to go about that infinite task and, short of using a stick and making marks in the wet sand, using one’s fingers to draw in the frost on a window, or shaping a wet lump of clay with both hands, drawing in black & white has got to be one of, if not the most direct, most intuitive way to work.

When using colours, one needs to make constant decisions as to which hue to apply, where and how, and whether it be with natural or digital media, one needs to leave the (direct experience of the) drawing/painting in order to mix and load the appropriate colour (not to mention adjusting many other variables, opacity, wetness, viscosity, thickness, etc.).

When selecting a hue, one’s gaze and attitude have to shift from the exploring itself and concentrate, at least temporarily, on the “plumbing.”

It’s like pulling out of “just doing” and falling into “thinking about (the) doing.”

Drawing is a privileged means by which most of those obligations to move away from (the immersion in) the a-borning image can be avoided: while drawing, one can dive into the space being created/discovered and revel in it, without constant interruptions, for periods of time far longer than with almost any other media.

With drawing tools, one can modulate the tonality of the marks by varying the pressure applied to the tool, adjust the width of the mark by tilting the tool this or that way.
All those essential adjustments can be done instantly, intuitively, adjustments which, if using colours, would most often require leaving the (immersive experience of the) work in order to return to the plumbing, a “distraction” which can be avoided when drawing in black and white (hence my calling it the most intuitive and direct way).One can even deepen the immersive experience by holding the pencil/charcoal/graphite stick or whatever marking tool one is using in one hand and holding an eraser in the other (or, if using a Wacom tablet, simply flip the stylus and use its drawing or eraser tips).

One important remark: an eraser is not there to “get rid of mistakes” but is/should be an essential drawing tool, shaping the marks/patterns, bringing (back) light into the drawing, a far cry from being “just an eraser” (I know that some drawing teachers consider using the eraser as a sign of weakness, something which I totally disagree with, as would Alberto Giacometti: one can, in this video, see him draw a portrait of Igor Stravinsky using both his hands as described above -see the video at 0:52 especially).

One can also use two different Wacom pens (like the regular “Grip Pen” in one hand, and an “Art Pen” in the other as I often do, duplicating via a graphic tablet what I was doing with natural media when still allowed to use those -no allergies then), basically working with both hands (almost) at the same time (for the record, I am right-handed, I can draw/paint extremely intricate details with my left hand while being barely able to write my name with it).

This way, one hand puts down marks (“creates”), the other reshapes/removes them (“removes” or at least, “modulates”), one has that all-essential and complete “doing-undoing” process constantly at one’s disposal, without ever having to take one’s eyes away from the drawing.

But there is more, much more: when “using” colours, one tends to separate “this” from ”that,” as with a green apple being seen as distinct from a red cloth on which it is placed.
Yet, when drawing with black and white, one might see that this part of the green apple has the same tonality as that part of the red cloth, they thus become/are seen as one, belonging to/forming the same shape/pattern.

Here’s one example showing how the boundaries between various “things” are not constant, and if one draws the “passages” through which one thing fades/merges into another, one almost inevitably becomes involved with “patterns” that are at the very core of abstraction: 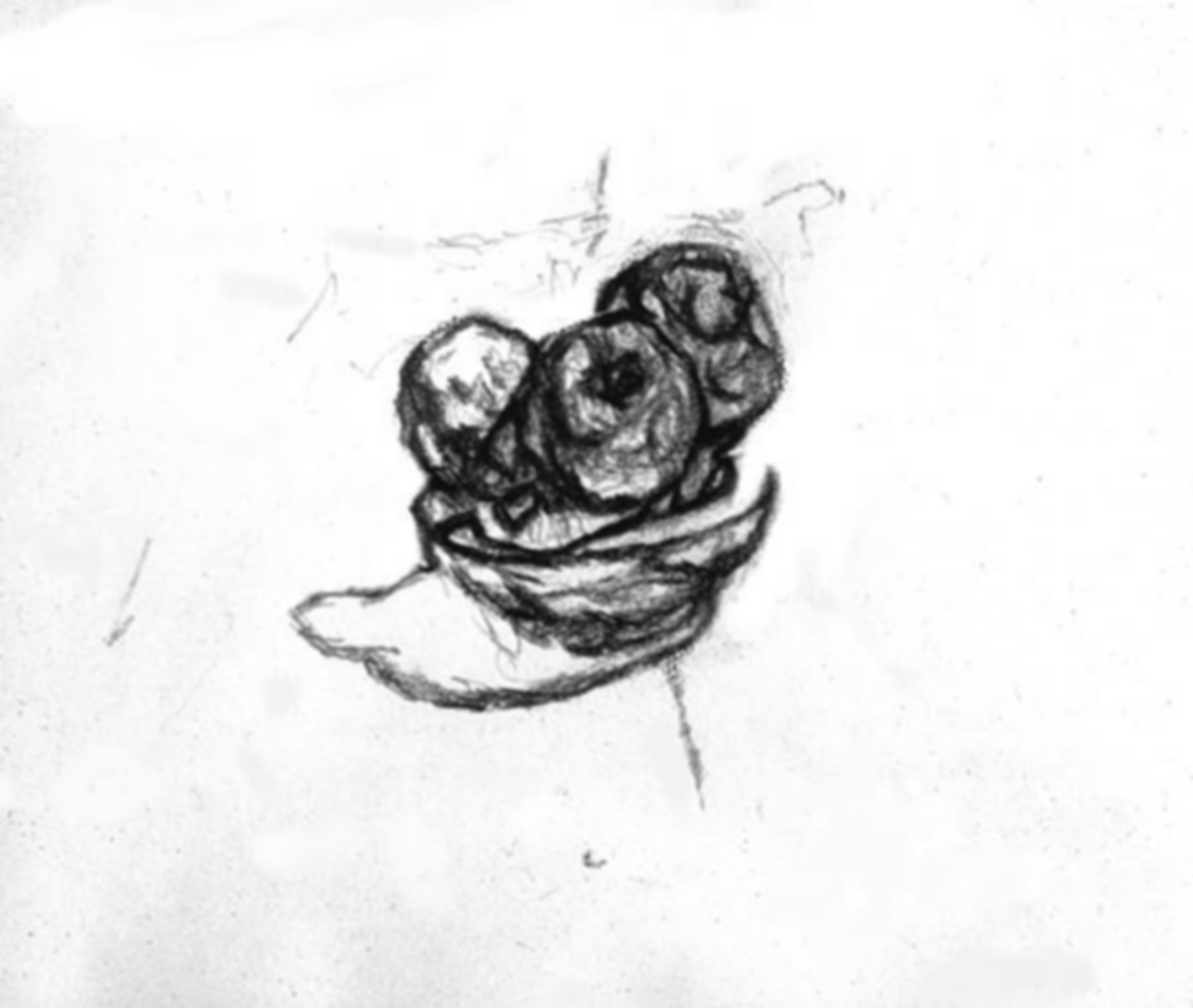 So in that sense, working with colour could be seen as being a way to separate/dissect the unity of (the experience of) the real, while drawing in black and white can/could be seen (and experienced!) as opening up to (the oneness of) it.

Let’s go in one step deeper: if, by the virtue of drawing in black and white only, “things/objects” start to merge (those patterns), differentiations between “this” and “that” are blurring, we are then (hopefully, at least potentially) opening up to an undifferentiated “mess,” along the memorable lines of Ronald Hayman in the Spring 1980 Yale Review: “The mature Cézanne had no designs on the field of vision except to uncover the designs he saw in it. It is this suspension of will power that gives him admission to the undifferentiated world which precedes knowledge, to Eden as it was before Adam conferred separating names on each form of vegetal and mineral growth.”

When I was teaching at the NY Studio School of Drawing, Painting and Sculpture, I lectured often and several of those presentations were explorations of the following theme: “What do I see before knowing what it is I am looking at?”
With my students, we were probing the pre-verbal world Ronald Hayman talked about, and in accordance with the premise of that exceptional school, we were discovering, in our own “ordinary” perception, the seeds of “genuine abstraction” (abstraction that is rooted in experience, in perception, not as a mere manipulation of a taken for granted visual world). 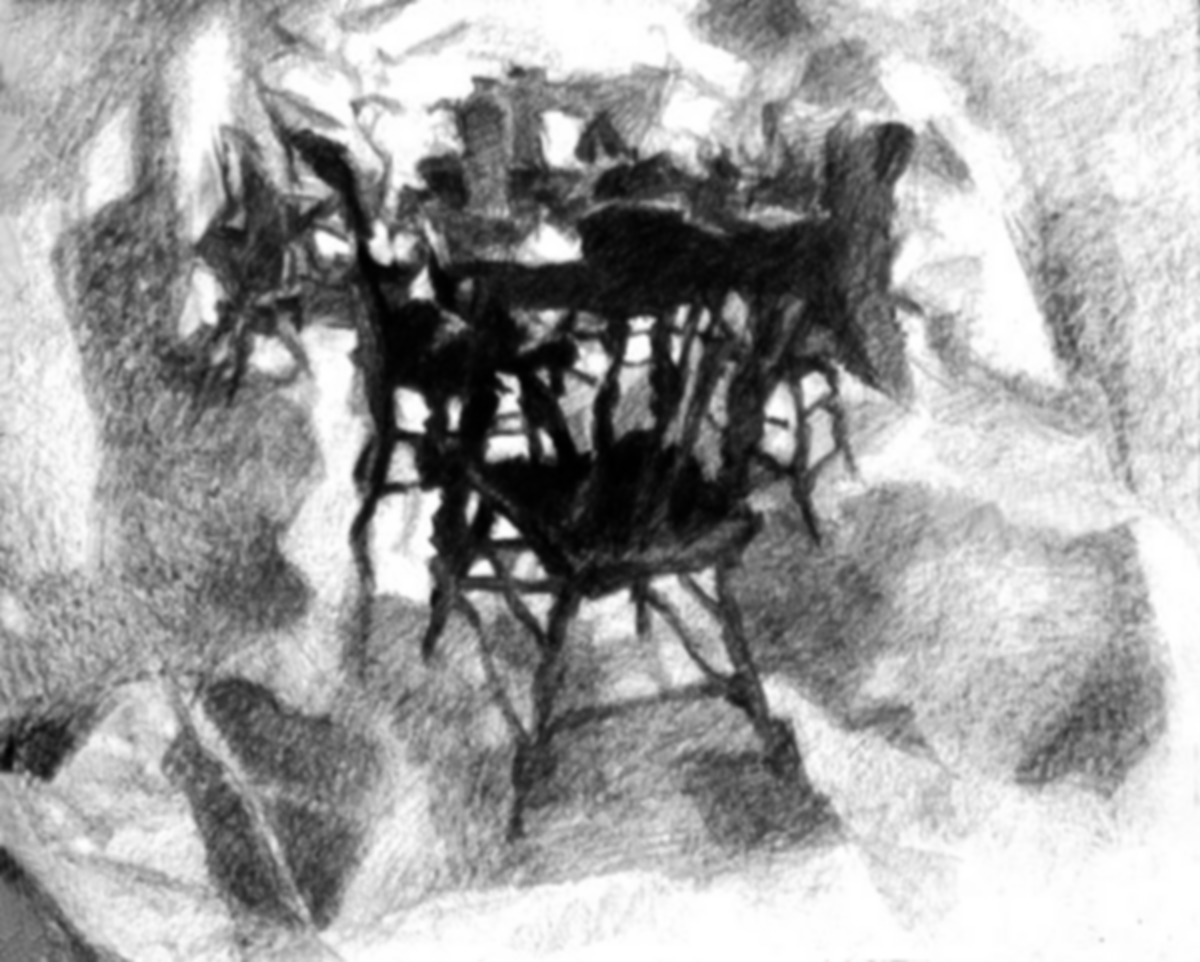 But back to drawing in black and white: when I was a student in Art school, well over 50 years ago, I was already much more attracted to the masters’ sketches than to their “finished” paintings, there seemed to be much more “life” in their sketches (often drawn in black and white, at least monochromatically) than in most of the “finished” paintings they were supposed to be studies for.
There are many exceptions to this, of course, but those exceptions are mostly to be found in paintings that were approached “as sketches,” paintings in which the artist was still searching-while-painting, not merely (re)producing/rendering the “solution” of a “problem.” It is when that unresolved quality is being lived as unresolved, through-the-act-of-drawing, that the work appeals to me the most, in “still art” as well as in “animation.”

In visual art, whether one wants it or not, the process that gave birth to the artwork is present/embedded in what that work reveals, in what it makes manifest. The work never lies: if it was arrived at through an honest journey, it conveys that honesty, it shares/makes visible what the artist and his work went through.
If the work was just a “transfer” from a sketch to a canvas or whatever support the “finished” piece ends up being transferred to, the “live” element is sorely missing, that piece is dead (not even that, it never was alive to begin with).

There lies a significant problem with many of the works we see today, the (often “messy” but, in my not so humble opinion, utterly necessary, essential) work-as-a-journey has given way to the requirements of the model dictated by the product oriented entertainment industry, expectations are now such that any traces of doubt in the work are too often perceived as signs of weakness, of lack of skill, even lack of talent, they are to be eradicated or at least, hidden.

The aesthetics of photorealism and its expectations reign supreme, even in so-called “abstract” pieces, images are expected to be super-slick (think 3D for example), ambiguity is not welcome, elusiveness is to be avoided at all cost unless it is a false ambiguity, conceptual instead of experiential.

Albert Camus’ “The failure shall be the measure of success” would most certainly find few takers today… (I recall my being at a magnificent Alberto Giacometti exhibition in 1998 at the Montréal Museum of Fine Art and being mesmerized by a fabulous portrait, oil on canvas, only to hear a little girl tell her mother, commenting on that “same” painting: “this man can’t paint, look at all the drips at the bottom of the canvas!”).

This is very similar to what I have heard grown-ups say about other “elusive” artworks in other circumstances, as long as we believe that “the eye works like a camera and we all see the same things,” we will miss the opening into our own mystery elusive works provide us with…

It’s difficult to convey with words what the implications of working “by-way-of-not-knowing” are in contrast with working towards a finished (and often totally predetermined) “product.”

On the one hand, anything could happen, miracles and failures, on the other, only that which was foreseen is deemed possible, accepted, realized, creating is no longer a process of discovery, it thus has become a mere technical and mechanical transfer which, by definition, precludes it from being “creative.”

The possibility offered to us, when we are involved in an open-ended process, to discover that our best work lies in the difference between what we aimed to do and what actually was done is awaiting us. But if we work “mechanically,” the possibilities of the work are greatly constrained so that failure is avoided (which, unavoidably, precludes “miracles” from happening as well) and that essential learning never takes place.

Picasso’s “What saved me is that I became more interested in what I found than in what I was looking for” can demonstrate its relevance, time and time again, but too often, we are stuck in a world from which miracles are excluded and we are left with a predictable product, fast (visual) food, “entertaining” at best…

Working in black and white can be a means to an open-ended process and experience if, helped by the way various elements (can) merge into patterns, one is no longer rendering or categorizing assumed-to-be-known objects; and one can thus enter in a dance during which whatever it is that requires us in order to appear gains the voice needed to come to life (that is what is meant by “the work making itself through me”).

If one dives into this undifferentiated world, one can reach beyond yet another limitation of habitual work, reaching beyond figure/ground differentiation, between this and that, between “it” and “I.”

That is when the real work begins, in any Art form… 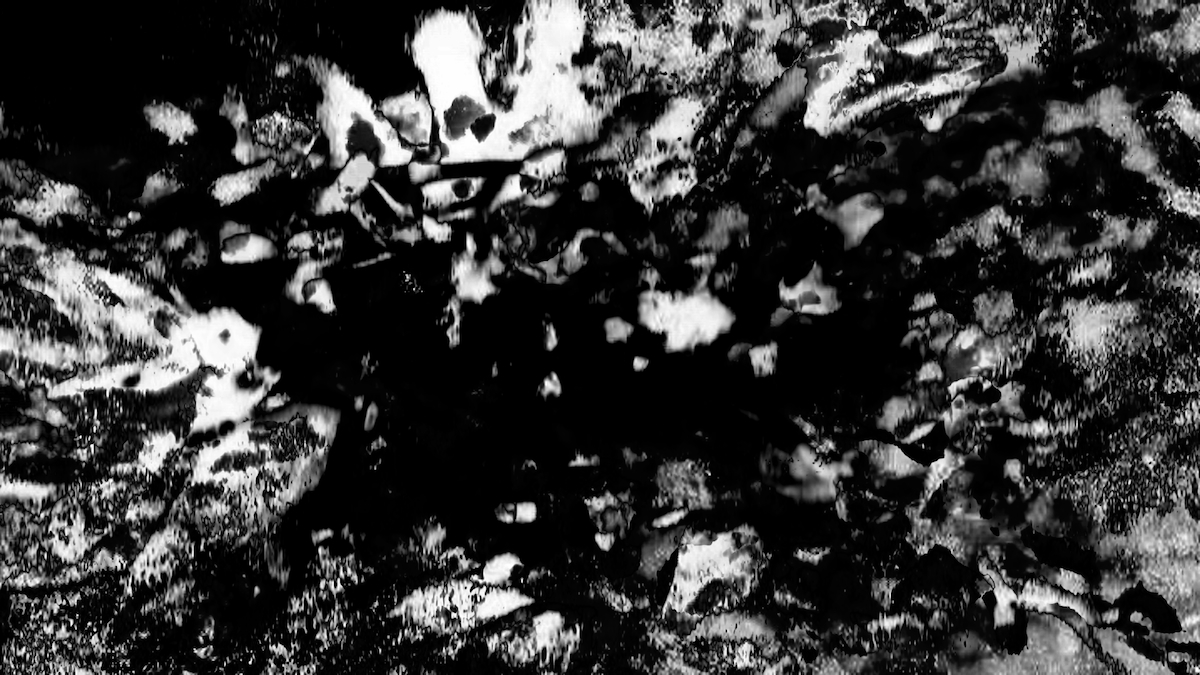 See more movies in Black & White (only, or mostly, or in part)

(A Version of this post first appeared on http://www.vudici.net/Black_and_White_Only_B.html)

Jean Detheux, Belgian born, graduate of the Académie Royale des Beaux-Arts (Liège).
In Canada/U.S since 1971.
Has taught “Art” in Canada and the US (NY Studio School of Drawing, Painting and Sculpture, NYU, Concordia U., Alberta College of Art, etc.).
Artwork (natural media and digital) in private/public collections (in Europe, the Americas, Asia and the Middle-East).
Left natural media (1997, due to sudden deadly allergies to painting materials) for digital technology (started exploring “time-based art”).
Films with the National Film Board of Canada (“Liaisons” and “Rupture”), numerous films in festivals since 2005.

Focuses on the importance of the hand gesture in image making (“le geste révélateur”), and especially, on the exploration of “inherent animation” (that which is done/found “by accident”), avoids “smarts” like the plague, believes that the conceptual approach is a dead-end.

Numerous lectures (in the US, Canada, Australia, Denmark, Lebanon, Belgium), conducts master-classes (including in music schools), has written many articles (AWN, SAGE, VFXWorld, NFB, The Wig, International Journal of Arts and Technology, etc.)makes films and also participates in concerts, creating images in real-time in collaboration with musicians (improvising and/or not).

9 responses to “Black & white, the most direct way to making the visible visible.”