It can be argued that the primary emphasis of the animation process is on observation of movement. As animators, we are continually studying motion in order to understand the way things naturally move and interact. Motion can be considered the core of our practice in constructing our art. The more movement we observe, the more we advance our animation skills set. Whether the animator is striving for realism or caricature, all movement needs to be established by motion observed in real life.

In the nineteenth century the practice of studying movement became the focus for many scientists, photographers and even astronomers intrigued by the relationships between time, space and motion in order to gain a better understanding of human perception and how we experience it. This practice came to be known as chronophotography, which investigated movement and offered an accurate account of the phases of motion by capturing what the human eye cannot see [1].

Central to the development of chronophotography was the work of physician and scientist Étienne-Jules Marey, and world-famous photographer Eadweard Muybridge. Together, their experiments and scientific enquiries are responsible for the iconic photographs that delineate the essence of nineteenth century chronophotography. For animators, Marey’s multi-exposed still photographs are particularly important as they capture the multiple phases of movement on a single photographic print [2]. So too are Muybridge’s sequential photographs of human and animal locomotion made famous through his initial study of the horse’s gait commissioned by Leland Standford. Both chronophotographers’s prolific studies assisted in developing the fields of scientific and industrial photography. 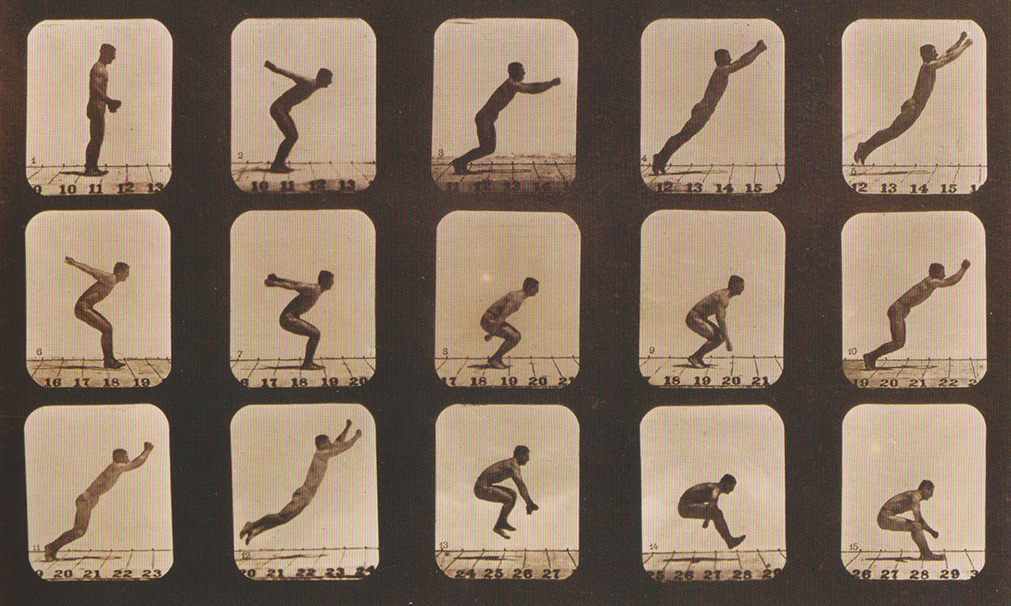 As character animators, our profession is to observe motion, break it down into its simplest form through key poses, then re-create it frame-by-frame in order to make a character appear like they are moving or ‘acting’ in a believable manner. In doing this, we are in fact conducting a similar research process as that of chronophotographers, but within a different framework. Animation and chronophotography are therefore inextricably linked by these concepts of studying and freezing movement: the representation of the still and the moving image are an important part of our process.

Furthermore, in the 3D character animation production process there are several options to display visual representations of time and space as part of the animator’s workflow. These are considered the building blocks informing the motion of the character. One method in 3D, common for this process is called ‘ghosting’ or ‘onion-skinning’[3]: a viewing method in which multiple images are displayed in a ghost-like manner, each representing the motion of the character before or after the current frame (depending on the user’s preferences).

Ghosting also has its roots in traditional cel animation, where animators use the translucent cels containing the previous and next keyframes as a reference while drawing (see “Ghosting Animated Objects”). This process gives the animator a feel for the motion of the character and serves as an essential guide when editing the keyframes. It takes a trained eye to be able to understand these multiple images and their purpose is solely for workflow and motion assessment of the animated character. The final sequences of rendered images that we see on the screen represent the clear motion of the character one frame at a time, similar to how we perceive motion in real-time with normal vision. In addition, the ‘ghosting’ process displays a range of motion similar to Marey’s multi-exposed chronophotographs and provides an interesting visual relationship between animation and chronophotography. 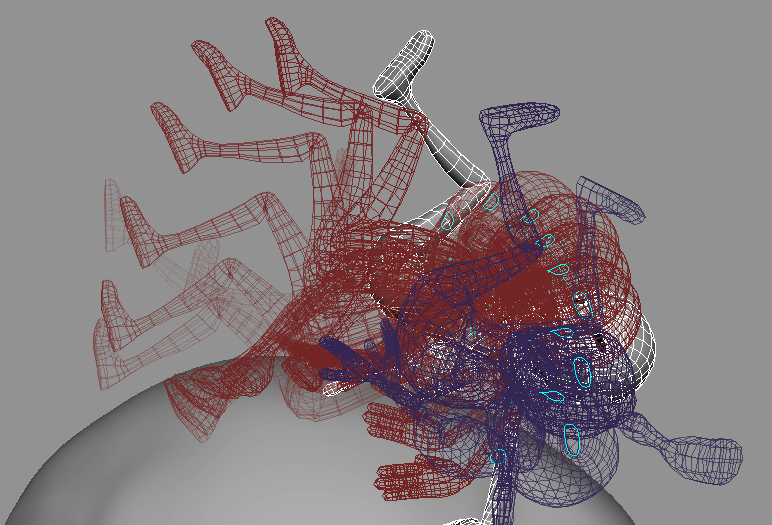 Example of ‘Ghosting’ using 3D software. Animation ghosting created in Softimage XSI with trail settings of 2 before and 7 frames after the action, with a frame step of 2.
Source: screenshot from the animation of Carelize Jacobs, 2016.

It can therefore be suggested that today’s animators are using notions of freezing time and analyzing movement to extend their visual language through the exploration of concepts practiced in chronophotography. Animators continually explore the link between the still and the moving image, demonstrating a clear link between chronophotography and animation.

Bronwyn Horne is a lecturer in 3D Animation at The Witwatersrands School of Arts in Johannesburg. She completed her Masters in Fine Arts (cum laude) at the former Technikon Witwatersrand (now University of Johannesburg) in 2003. After gaining some work experience in education and training, she completed her Masters of Arts (in Digital Arts) at the University of the Witwatersrand in 2008. Since that time she has worked at Luma as a 3D artist and animator in both series production and commercials; as well as at Monarchy as an animator and motion graphics artist for local channel imaging. During this time, she has also contributed as a part time lecturer in Animation at Wits University, now on a full time basis as of 2013. Her interests are primarily in the technical field of 3D with a keen interest in animation, texturing and lighting.

[1] The foregoing occurred through the medium of photography which at the time was regarded as a true representation of reality.

[2] This was achieved through the development of Marey’s photographic gun (1882), which was based on the astronomical revolver of Jules Janssen (1874). The improvement on Janssen’s model was that Marey’s gun could produce pictures 800 times more frequently (Marey 2000: 322–323).

[3] The terminology is dependent on the software in question.

One response to “Exploring the Links between Chronophotography, Movement and Animation”