The work of anime director Kunihiko Ikuhara is not only known for being deeply symbolic, but also for having outstanding representations of lesbians in anime. This is significant because LGBT visibility is quite low in Japan. Gay marriage, for instance, is only an option in a handful of city wards (municipalities organized by neighbourhoods), starting with Shibuya ward of Tokyo in May 2015. Ikuhara’s work presents complex portrayals of lesbian characters, particularly as powerful heroines. Amidst a media culture where LGBT representation is often archetypal, or worse, stereotypical, Ikuhara’s paves the way for better LGBT representation, and ultimately, queer liberation.

In his animated feminist masterpieces Revolutionary Girl Utena (1997) and Yuri Kuma Arashi (2015), Ikuhara envisions the first steps of queer liberation. Each show illustrates, both literally and metaphorically, how patriarchy (Utena) and queer stereotypes (Yuri Kuma Arashi) structure and oppress the world of the characters, and by extension our own. In this post, I will focus on the more recent show Yuri Kuma Arashi (2015), and it implications for queer revolution and representation in animation.

In English, the series essentially translates to Lesbian Bear Storm, but the title Yuri Kuma Arashi itself has double meanings in Japanese. The word yuri means both ‘lily’ (a sapphic symbol of love within the series), and also refers to the genre of lesbian fiction in Japanese anime and manga. Through the layered meaning within its title, the series signals its subject matter: critiquing popular conceptions of lesbianism in Japanese media, and presenting more radical representation for the future. 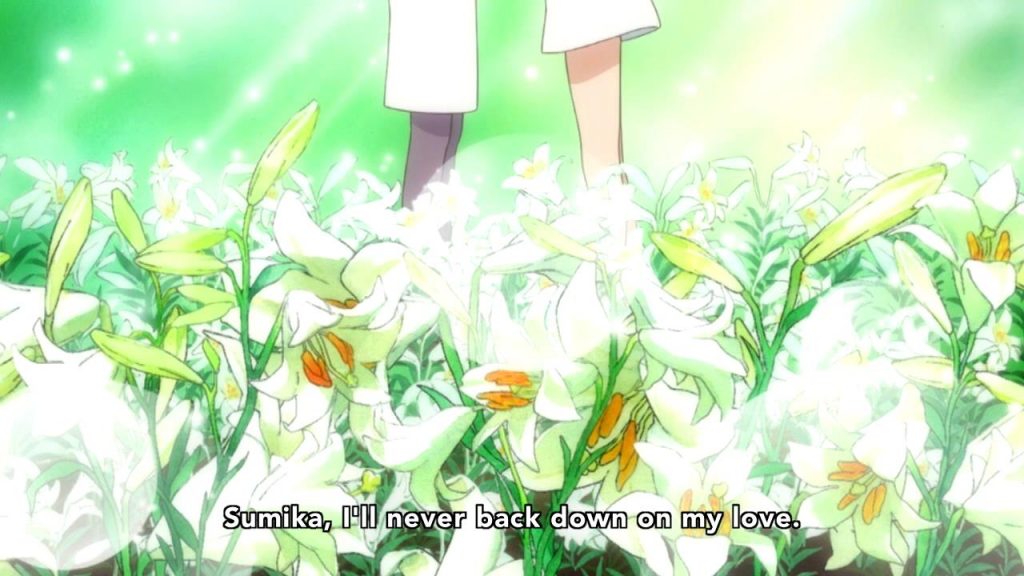 In Yuri Kuma Arashi the world is divided by a Wall of Severance, a literal barrier between what becomes the main couple in the series, Kureha, a human at the all girl’s school in the human side of the world, and Ginko, a bear in the other side of the wall. Ikuhara has a penchant for literalizing metaphors, and this is on clear display here, with female humans representing cloistered lesbianism suppressed by society, and bears representing the predatory lesbian stereotype. Ikukara presents both of these options often perpetrated by Japanese media, and disregard both of them, criticizing them through Yuri Kuma Arashi. One of the main ways Ikuhara does this is through the characters of the Judgemens, the only male characters in the show, who put bears on trial before permitting them to cross into the human world. With names like “Life Cool” and “Life Sexy”, the values of these metaphysical judges are clear: they permit bears (i.e. open lesbians) to express themselves only when it satisfies their own male gaze. 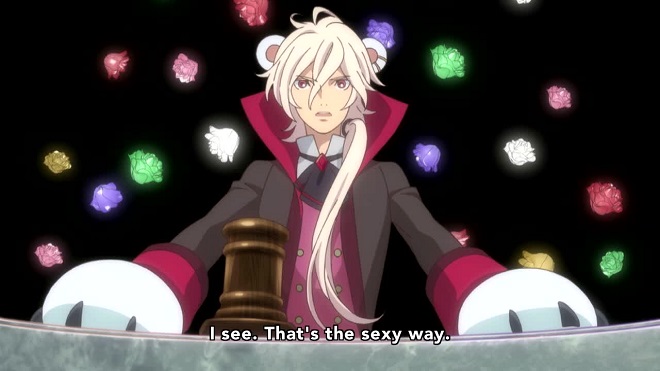 But as Ikuhara demonstrates throughout the series, to love and desire another is not avaricious, like the predatory lesbian stereotype perpetuates, nor hidden, like it is in the all girl’s academy, nor something merely for men’s pleasure, as the Judgemens demonstrate, but an act of love that is to be cherish, not commodified.
At the end of Yuri Kuma Arashi, like in Revolutionary Girl Utena, the main characters leave the system of oppression, paving the way for other characters to follow suit. Kureha realizes the mistake she made earlier in her life. It isn’t that Ginko should conform to the human side of the world, to hide one’s love for each other in the dark corridors of oppressive institutions, but rather, Kureha should join her, and refuse to cooperate anymore with the unjust social stigma of being a bear. Kureha wishes to become a bear, and joins Ginko in open, lesbian love. 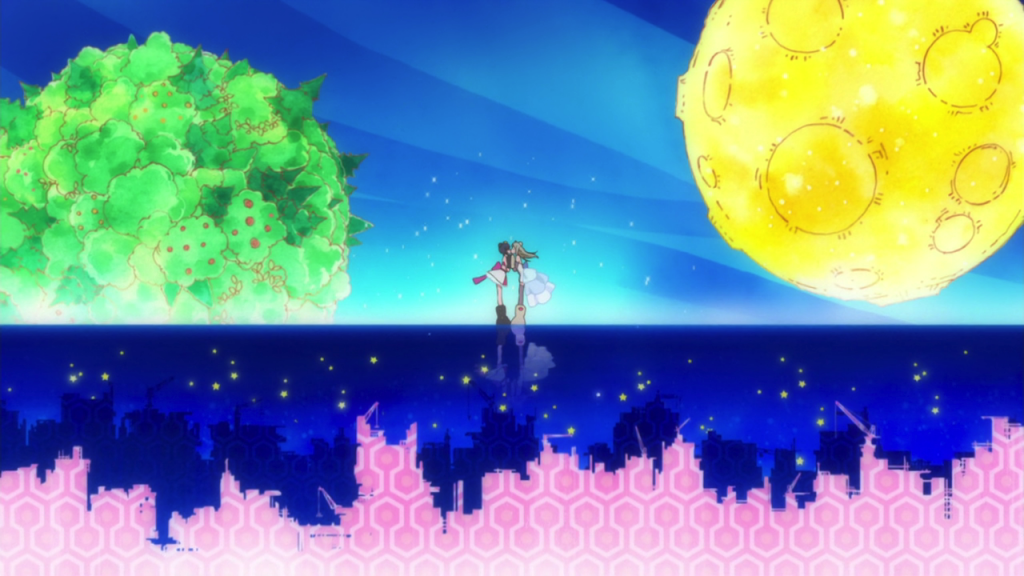 Kureha and Ginko have transcended the Wall of Severance

Like in Utena, the main couple escape to a better world, a real world where oppressive structures no longer exist. The main couple also pave the way for others to join them. As Ginko and Kureha leave the oppressive world and its walls behind, another character, Ai Utsuko, a former acolyte of the Invisible Storm (another oppressive apparatus within the school) becomes awakened through Ginko’s and Kureha’s revolutionary love, falling in love with a bear herself. While the Wall of Severance is still being built at the end of this show, a symbol of the social stigmas that continue to oppress queer people, particularly as they manifest in Japanese media, Ai has begun the process of learning a revolutionary love. 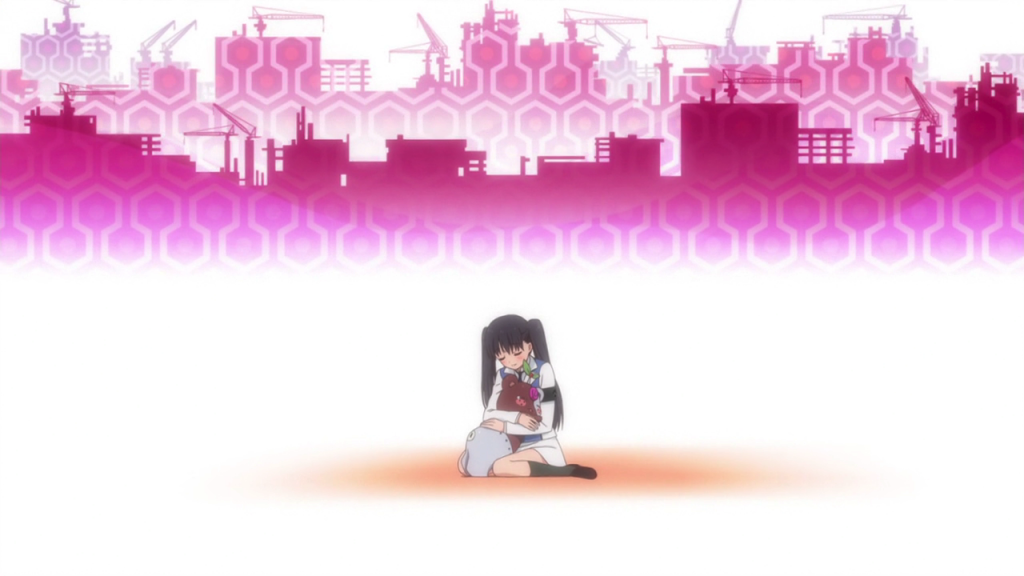 Ai and a bear, with the Wall of Severance looming in the distance

Much like the heroines in his anime, Ikuhara, through his revolutionary works, paves the way for better LBGT representation in anime, and envisions the first steps toward queer liberation. While the structures that still oppress stand at the end of his works, each series also envisions paths of resistance and destruction, ultimately entering around the revolutionary potential of lesbian love.