But I am even more than the two of them.
Everything they care about is what I am.
I am their fury.
I am their patience.
I am a conversation.

“Stronger Than You”, Garnet (Estelle)

I have a Garnet keychain that I carry around with me everywhere. It feels like a good luck charm.

Garnet is the leader of the Crystal Gems on the acclaimed Cartoon Network series Steven Universe (2013-present), a genderless fusion of two other aliens, Ruby and Sapphire. She is voiced by the British pop singer Estelle, who often sings songs for the show. Ruby and Sapphire are in love, and have chosen to live permanently in their fused form as Garnet, as the ultimate expression of their queer love.

Visually, Garnet is partly based on the Hindu deity Ardhanarishvara, who also has three eyes and was made through the love of two beings. In terms of personality, Estelle appears to be either a clear influence, or perfectly cast. As a result of all this, Garnet has become the standout star of the Crystal Gems. Why? 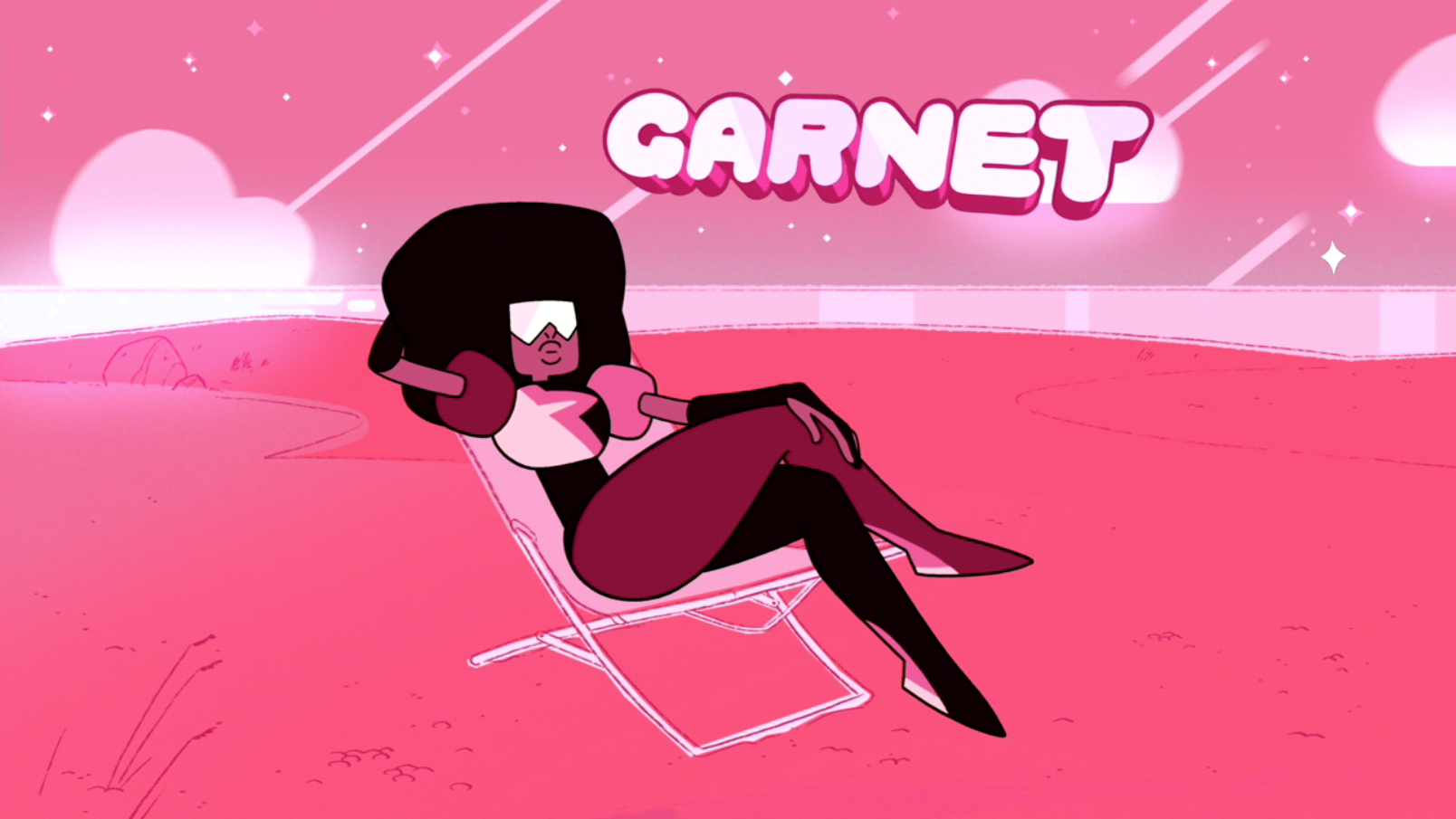 Steven Universe is an animated series ostensibly intended for children. Much of its praise has been due to its explicit queerness and gender-variance. Certainly, there is a history of shows like this being able to get away with subversive elements along the same lines (think of Bugs Bunny’s drag). Yet, there is the concurrent fact that children must be “protected”. For this reason, in early 2016, Cartoon Network UK chose to censor one of Steven Universe’s most explicitly queer moments in the episode “We Need to Talk,” wherein Pearl embraces Rose Quartz (two other Gems) to make Greg (a human male) jealous. The network said in a statement: “In the UK, we have to ensure everything on air is suitable for kids of any age at any time. We do feel that the slightly edited version is more comfortable for local kids and their parents.”

As Roland Barthes once argued, every image is capable of limitless meanings, and there’s something particular about how animation takes advantage of this. Jeffery P. Dennis, who has written often of cartoons engaging in taboos, wrote in 2003: “Signs are necessarily unfixed, especially in cartoons, which build on inference … In sophisticated eras, animators can introject, and audiences can decode, overt signs of same-sex desire, and even specifically gay-identified characters” (Dennis 2003: 132). This mutability in perception and reception is more acute in animation, allowing for decodings that are oppositional. Therefore, as Alex Doty memorably wrote, queer spectators developed “a social and political strategy: perhaps through overwhelming details and examples we can make what is invisible to so many visible and what is denied possible” (Doty 2000: 55).

I say all this to suggest that Garnet, as the denotatively queer representation of Ruby and Sapphire’s love, has reigned as not only the Gems’ leader but as the most popular Gem for the show’s fandom due to this queer signification. As Maya Gittelman, a writer and fan, wrote for the blog The Dot and Line after a Garnet-centered episode called “The Answer”, “I am queer and mixed-race, so Garnet … already felt like a game-changer … Characters like Ruby, Sapphire, and Garnet never get those stories. They’re canonically nonbinary alien queers! It gives the strong, no-nonsense, mixed black lesbian a classic heroic origin.” Especially in light of pushback, much of what is loved about the series in general is summarized in the character of Garnet, undeniably visible and an example of what is possible through queer love.

Jake Pitre is a graduate student in Film Studies at Carleton University. He recently presented a paper called “Shameless but Sincere: Homage and Nostalgia in Stranger Things” at the SCMS conference in Chicago. He is at work on his master’s thesis, which explores queer spectatorship of children’s TV animation, through the lens of Steven Universe. He also previously presented a paper on The Witch and narratives of radicalization at the Film & History 2016 conference in Milwaukee. He is a regular contributor to Polygon, Hazlitt and Dazed & Confused.

One response to “Stronger Than You: Garnet as Queer Icon”