On the Hollywood Walk of Fame, along with the many stars immortalizing real-life celebrities, there are also some honoring famous animated figures, such as Mickey Mouse or Donald Duck. Indeed, although they are made of lines and colors and not of flash and blood, also animated actors can rise to stardom, bringing to an extreme Christine Geraghty’s concept of the “star-as-professional.” With this expression Geraghty identifies those stars whose relationship with the audience “is based […] substantially on the film text” and whom have a “stable star image,” due to the fact that, basically, they interpret always a same role (Geraghty 2000: 189). In other words, we are facing a star-as-professional when “the actor is hidden behind the character and recognized only through that association” (Geraghty 2000: 187). And animated stars don’t just fit into this description, they are its ideal exemplification. In effect, first of all, since it is entirely “manufactured” and controlled by a studio, their star image can be characterized by a degree of stability and coherence that is hardly achievable when the star is a real-life human being. Secondarily, always in virtue of their very ontology, they exist as actors only in order to be a certain character, to the point that in their case the actor becomes indistinguishable from the character and vice versa. 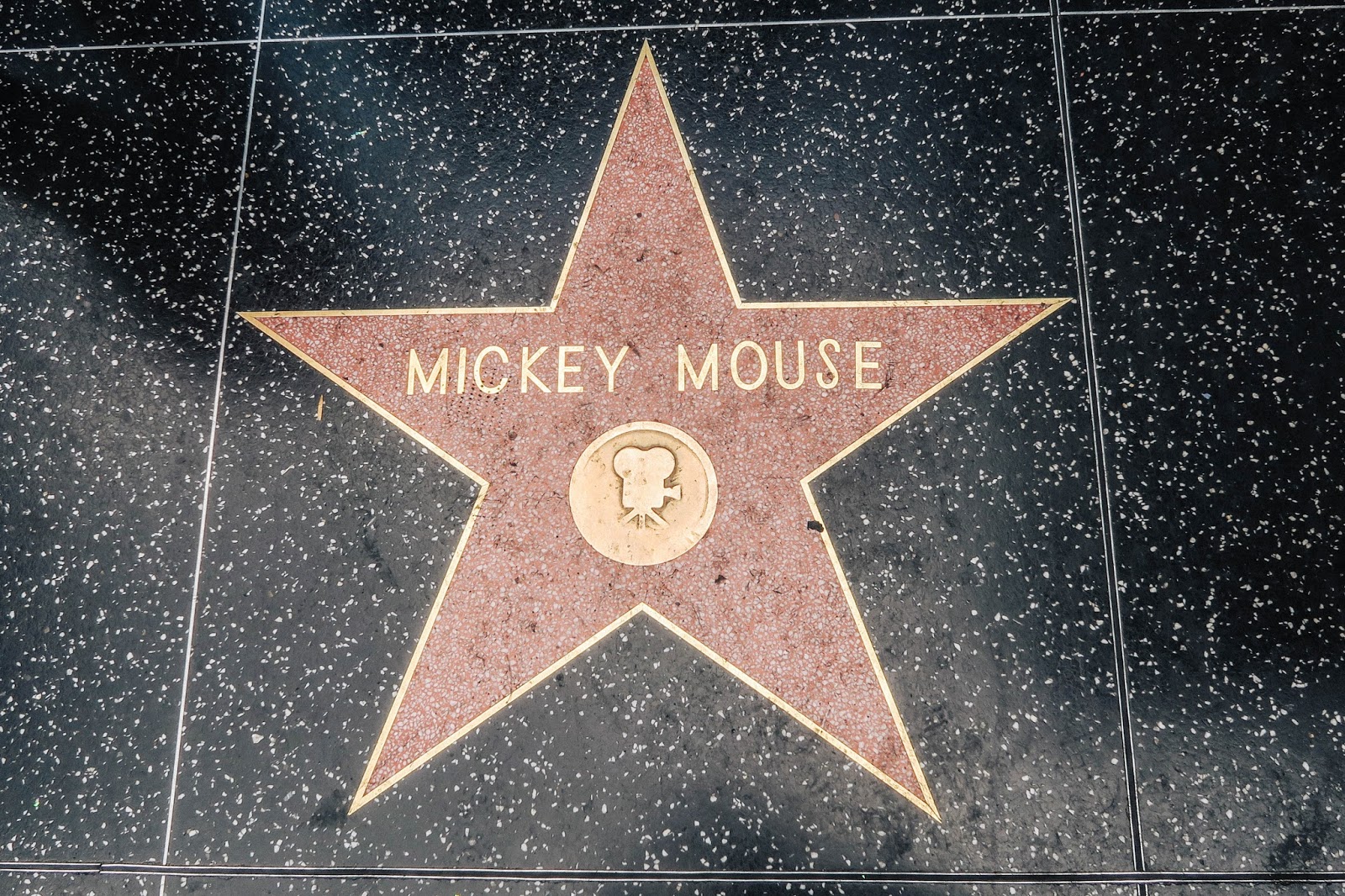 Mickey Mouse’s star on the Hollywood Walk of Fame

Animated performers started being immortalized on the Hollywood Walk of Fame only in relatively recent times[1]. However, at the Walt Disney Studios the construction of certain cartoon actors as stars commenced to occur early on. In particular, the popularity of set characters among the audience has long been exploited to ensure success at the box office as well as to generate further profits by means of putting on the market merchandise bearing their effigy. Yet, especially starting from the years of World War II, some of the studio’s most popular actors have been used also to instruct the audience, by having them star in animated documentaries[2].

In July 1944 Walt Disney himself, referring to the beginning of the conflict, declared to The Daily Courier-Gazette: “Since then, we have made very few films for entertainment only. I do not feel that Mickey and Donald Duck should be used for profit while the war is on. On the other hand, these and other of our characters have been very busy in educational pictures” (Disney in Anonymous 1944: 6). Indeed, for instance, Donald Duck was chosen to star in The New Spirit (1942), a short aimed at inducing US spectators to pay their income taxes by showing how easy it was to do so. Similarly, the protagonists of the second half of The Winged Scourge (1943) – a short pointing out how mosquitos can spread malaria and which are the measures that the audience can put in place to avoid being infected – are the same Doc, Grumpy, Happy, Sleepy, Bashful, Sneezy and Dopey that became famous for their appearance in the 1937 feature Snow White and the Seven Dwarfs.

Even after the end of the conflict, the Walt Disney Studios kept producing animated documentaries aimed at diffusing among the population knowledge related to the everyday or good practices in terms of hygiene, safety and so on. And, from time to time, one of the studio’s popular actors was casted to star in them. For example, Donald Duck is the protagonist of Charles Nichols’ How to Have an Accident in the Home (1956) and How to Have an Accident at Work (1959) or of Hamilton Luske’s short explaining the importance of mathematics, Donald in Mathmagic Land (1959). Analogously, in the series You and Your (1955-1977, ABC) and I’m No Fool With… (1955-1956, ABC) it is the talking cricket Jiminy Cricket that explains respectively the working principles of the human body and how to avoid putting oneself in danger in different contexts.

If compared to the overall number of animated documentaries produced by the Walt Disney Studios, those featuring one of its animated stars are a minority. Indeed, in order to reduce costs and production times, when creating its animated documentaries the studio tended to favor the employment of a more limited animation than that used in its fictional films. Also, probably, it was chosen to use cartoon stars in these animated documentaries mainly so as to comply at best with the agenda of presenting “solid facts in a very palatable package” that has always informed the Walt Disney Studios’ conception of such form (Kleiner 1982: 30). Yet, the employment of renowned animated figures can be seen too as a way of leveraging on our inclination to emulate the conduct of our idols, so as to fulfill another agenda that the animated documentaries of the time had: impact on the real by having set good habits and values take root among viewers. Indeed, when making these already popular characters the protagonists of an animated documentary, it hasn’t just been paid attention to giving them a physical appearance and a personality in continuity with the one that they showcased in the fictional animations in which they had previously starred. It has even been played with the traits that can more clearly be associated with their star image in order to induce spectators to imitate certain behaviors in their everyday.

Lets consider, for instance, The Winged Scourge. Here, first of all, a stability in the dwarfs’ star image has been sought attentively not only at the level of appearance, by having them look and dress like they did in Snow White and the Seven Dwarfs, but also at that of personality, by means of inserting little moments wherein their defining traits surface. For example, there is a scene wherein Sneezy produces a sneeze of such a gale force capacity that it makes the rowing boat he is steering go as fast as a motor one, or a scene in which Sleepy is shown in the act of yawning while working. 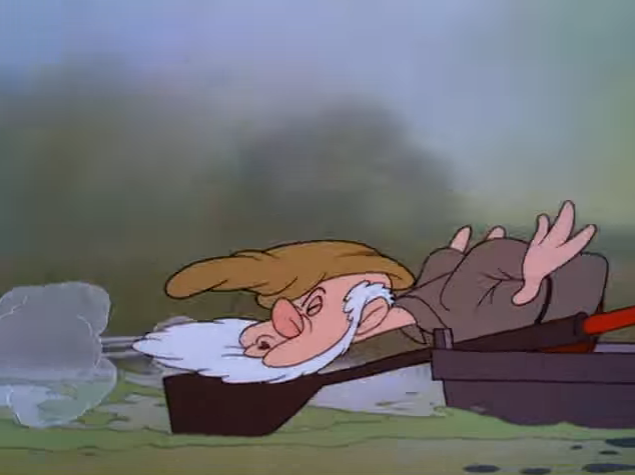 Secondarily, a linkage to the film that brought to fame the seven dwarfs is provided sound wise by having them fight mosquitoes at the tune of Whistle While You Work, the same song that in the 1937 feature accompanied Snow White while cleaning their house. Finally, the dwarfs’ image of hard working figures not particularly attentive to cleanliness is exploited to convey to the audience the message that malaria is such a dangerous disease that even the less keen on hygiene, like Doc, Grumpy, Happy, Sleepy, Bashful, Sneezy and Dopey, understand the importance of adopting the measures necessary to keep away mosquitos from their homes. 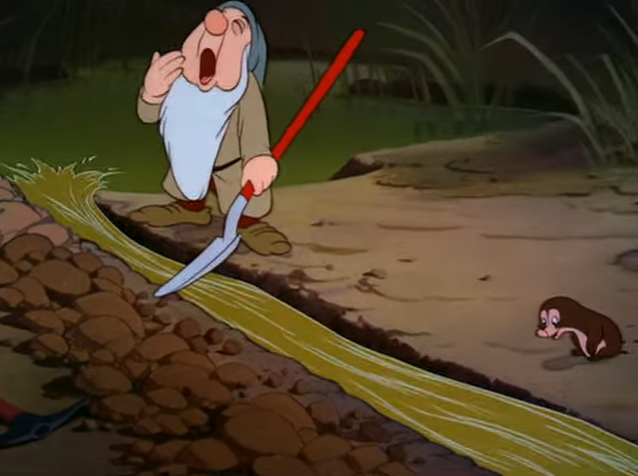 Sleepy yawning while working in The Winged Scourge.

Analogously, in The New Spirit the disproportionate enthusiasm and the clumsiness that characterize Donald Duck are used respectively to convey to the spectators the message that paying their income taxes is less painful than it can seem and that, if a bungles like the famous duck can effortlessly do so, they cannot but find it extremely easy. 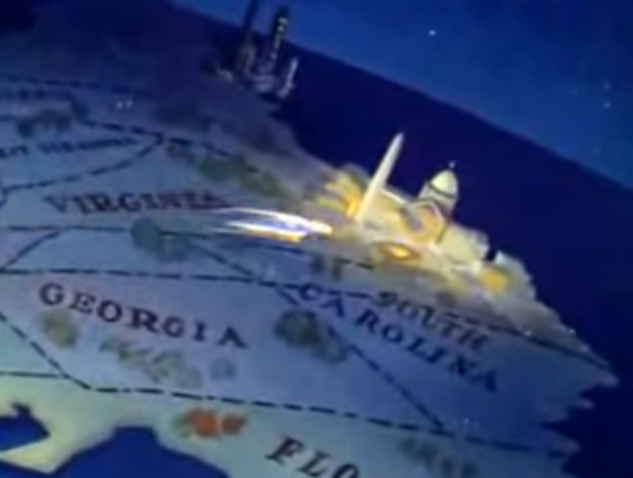 In The New Spirit Donald, in an excess of enthusiasm for paying its income taxes, instead of mailing its form brings it personally from Los Angeles to Washington.

In brief, when using their cartoon stars in animated documentaries the Walt Disney Studios have gone beyond the simple exploitation of these characters’ popularity among the audience to make profit. Similarly to what can be the case for real-life stars (see Dyer, McDonald 1998), the studio has also used its popular animated actors to propagate set good practices and social values that were felt to be “in danger,” thus showcasing to have a “mature” understanding of the concept of stardom.

Cristina Formenti is an Adjunct Professor at University of Milan. She has recently received a PhD in Film Studies from the same university defending a thesis on the theory and history of animated documentary. She is author of the monograph Il mockumentary: la fiction si maschera da documentario (Mimesis 2013) and editor of Mariangela Melato tra cinema, teatro e televisione (Mimesis 2016). Her essays have appeared on various national and international journals, among which Bianco & Nero, Studies in Documentary Film and Alphaville.

[2] Unlike today, during this form’s classical era (which spans from the early 1940s to the mid-1980s), animated documentaries were expositional in nature and were conceived as lessons on an aspect of our world.