As I write, the nineteenth iteration of the Taipei Film Festival winds to a close in three cinemas across the city. By and large the festival is an “international” affair, with omnipresent advertisements promising films from over 40 different countries, as well as a programming schedule constructed primarily around the International New Talent Competition. The festival’s diverse line-up, which clearly betrays a penchant for directorial debuts, enables active attendees to take the pulse of young filmmakers from across the globe. Highlights of the ten feature films I attended include the Indonesian musical comedy Three Sassy Sisters (2016, by Nia Dinata), the heart wrenching Macanese drama Sisterhood (2016, by Tracy Choi), a poignant, albeit stilted journey through the Moroccan Atlas, Mimosas (2016, by Oliver Laxe), and Singaporean Kirsten Tan’s Pop Aye (2017), a riotously amusing road movie shot in Thailand and co-starring an aging architect and an expressive elephant. 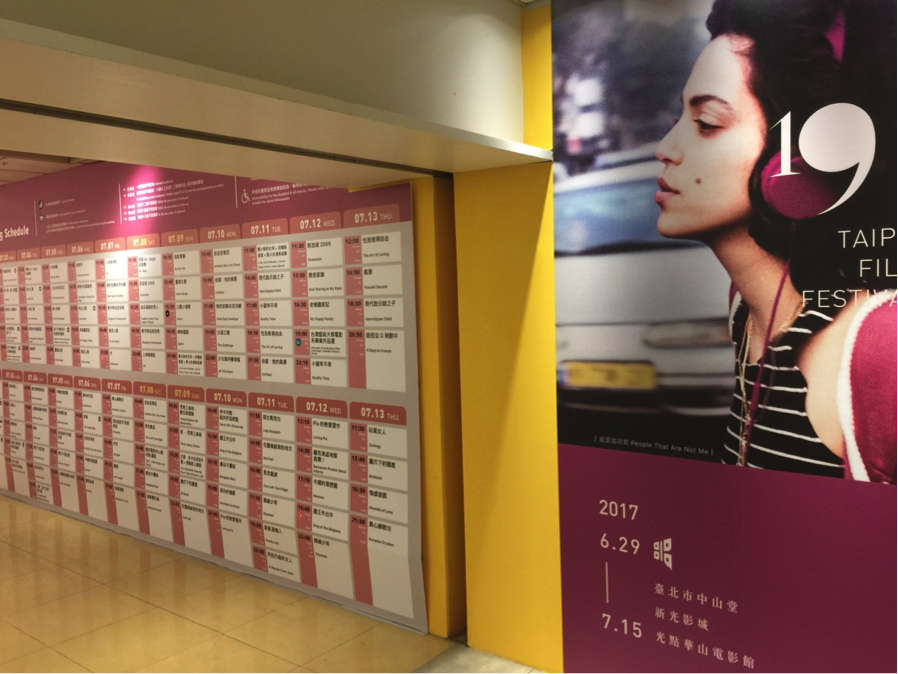 Entrance to the Taipei Film Festival in Shin Kong Cinemas

As such a list suggests, the festival almost exclusively features live-action fiction films, with animated works far and few between. However, tucked away within the 152-page program are two charmingly titled sessions comprised solely of domestic productions: “Animations I” and “Animations II.” Despite suffering an unsavory Monday morning time slot, the former, a screening of Kung Gen-ho’s feature A Shiung and Prince Siddhartha (2016), currently rests at number eleven on the “Audience Choice Top 20.” While I was unable to attend the film, I can only assume a very warm reception as the audience choice category encompasses all festival films, including popular retrospective and restoration screenings. For perspective, Kung’s work thus outranked the likes of Mizoguchi Kenji’s Ugetsu (1953), Hou Hsiao-hsien’s Millenium Mambo (2001), and Jia Zhangke’s The World (2004). So for those on the lookout for noteworthy animation coming out of Taiwan, this barometer, while certainly bizarre, might provide a helpful measure. 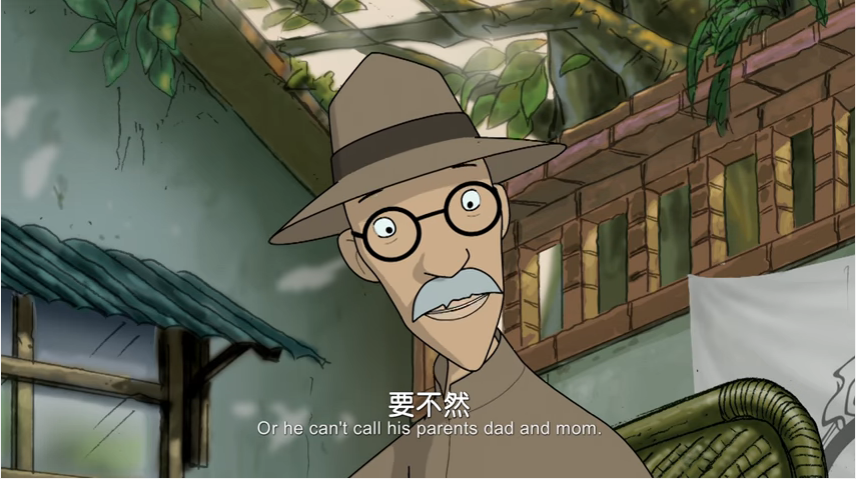 Nine short films were screened for “Animations II,” followed by a Chinese-language Q&A with four of the filmmakers. Of the selections screened, two animated shorts undoubtedly proved audience favorites: Yang Yung-shen’s Stories About Him (2017) and Chiu Shih-chieh’s Fundamental (2017). Stories About Him premiered at the festival and remains the only animated short in the Audience Choice Top 20. Yang’s masterful mixed-media approach to reconstructing conflicting accounts of a grandfather’s life feels reminiscent of John Canemaker’s Oscar-winning short The Moon and the Son: An Imagined Conversation (2005), and it is likely a shoo-in for the Taipei Golden Horse Animated Short Film Award, a category established last year. Though Yang was not present for the Q&A, Chiu was in attendance as the audience erupted in laughter throughout Fundamental, Chiu’s unrestrained take on his teenage escape from religious fundamentalism. After the screening, Chiu has described the film as deeply personal, albeit exciting to share with others. 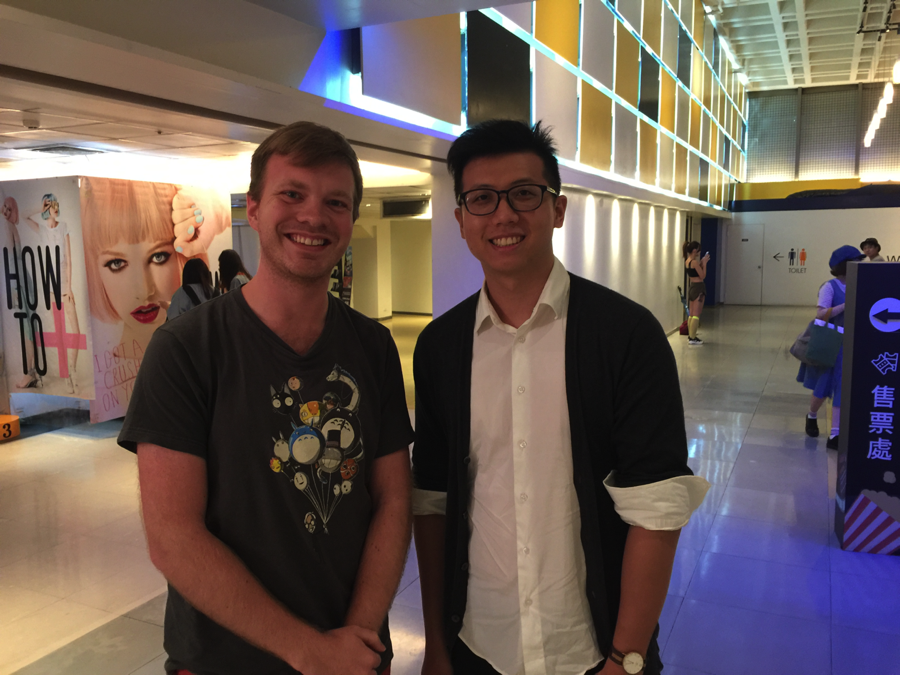 Jason Cody Douglass with Chiu Shih-chieh, the animator behind Fundamental (2017).

Also in attendance were animators Huang Yun-sian (Bart, 2016), Chiang Chu-ying and Lo Hsin (20, 2016), and Huang Liang-hsin (Long Island, 2016). Huang Yun-sian fielded difficult audience questions, as Bart – a bold stop-motion pseudo-musical nominated in 2016 for a Golden Horse – still suffers from a number of technical and narrative hiccups. Chiang and Lo, co-directors of experimental short 20, discussed their process of piecing together smaller projects to create a single short. Huang Liang-hsin remained almost as muted as her contemplative film Long Land, a hand-drawn meditation on the loneliness of a lighthouse keeper. Of the works screened without filmmakers present, the ultra-short And Then (2016), directed by CalArts BFA student Cindy Yang, stood out from the pack with its chic design and biting social commentary.

Admittedly, animated films remain downplayed at the Taipei Film Festival, and thirteen of the last seventeen Taipei Golden Horse ceremonies have been devoid of even a single nominee in the Animated Feature category. Nevertheless, the rich variety of shorts on display at the festival this year attests to a fledgling animation scene in need of more concerted scholarly attention. Such activity will find a welcoming home base at Fuzhong 15, a small theater and film library constructed by the Cultural Affairs Department of the New Taipei City Government in 2012 to support the study and appreciation of documentaries and animated films. Combined with the newly established Golden Horse category for animated shorts, and many Taiwanese animators actively sharing their work on Youtube, Vimeo, and social media (hyperlinks included throughout), scholars of animation should take note of such an increasing number of avenues for access.

Jason Cody Douglass is a graduate student in Yale’s combined PhD program in Film and Media Studies and East Asian Languages and Literatures. His review of Maureen Furniss’s A New History of Animation can be found in the summer 2017 edition of Film Quarterly. His essay on pioneering American animator Helena Smith Dayton was recently awarded honorable mention in the inaugural Society of Animation Studies Graduate Student Writing Award and is forthcoming in Animation Studies Online Journal. His current projects include a case study of Shinkai Makoto’s breakout hit Kimi no na wa (Your Name, 2016) and research on early animated Japanese television commercials.