In the seminal study of Weimar cinema, From Caligari to Hitler: A Psychological History of German film (1947), Siegfried Kracauer offers an intriguing tribute to Lotte Reiniger, the pioneering filmmaker best known today for directing the earliest surviving animated feature, The Adventure’s of Prince Achmed (1926): ‘In a tiny realm of her own, Lotte Reiniger swung her scissors diligently, preparing one sweet silhouette film after another’ (Kracauer, 2004: 128).

While Reiniger’s inclusion is significant – the animator is documented alongside Fritz Lang, G. W. Pabst and many other celebrated figures from the period – Kracauer’s comment has proved problematic for scholars attempting to rediscover this largely forgotten woman filmmaker. Rachel Palfreyman (2011: 6), for example, interprets the remark as ‘a gendered dismissal of [Reiniger’s] work as merely craft rather than art’. Feminists, art-historians and curators have highlighted the historical tendency to disregard handicraft or decorative works, stemming from an age-old hierarchy of ‘high’ versus ‘low’ art that devalues such ‘women’s work’ specifically because it was associated with the domestic and the ‘feminine’.[1] In effect, whilst segregating Reiniger from the other (almost entirely male) filmmakers catalogued in the volume, Kracauer’s ‘tiny realm’ image is patronizing, representing a marginalized ‘domestic’ space occupied by Reiniger and her ‘sweet’ handcrafted films.

However, there are myriad connections between Reiniger’s silhouette filmmaking technique and traditional handicraft. While her animation practice is rooted in silhouette portraiture, paper-cutting and Eastern shadow play traditions, the self-taught animator enjoyed a long career in independent filmmaking often working from a simple home-studio. Employing basic materials such as scissors, card and wire, Reiniger’s handmade characters and backdrops were animated on the Tricktisch, an animation table designed with her husband. In Reiniger’s silhouette shorts Cinderella (1922) and The King’s Breakfast (1937), the animator’s hands quite literally enter the frame to construct their protagonists. 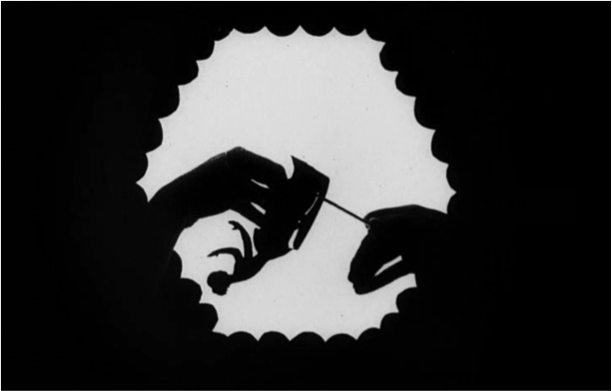 A shot from Cinderella (1922) by Lotte Reiniger

Animation scholar William Moritz (2009: 15) suggests: ‘The genre of silhouette films also constitutes for Reiniger a kind of feminist validation of a women’s folk art form’. Through her pioneering fusion of silhouette craft with the emerging medium of animation film, Reiniger’s work transforms a handmade form – traditionally practiced by women with no access to formal training – into a distinctly modern and aesthetically radical medium. It is the very handcrafted and homemade quality of Reiniger’s animations that renders her films so powerful. Her creative practice specifically flourishes within a ‘domestic’ environment, rather than being inhibited by these conditions. In a 2015 ‘Female Gaze’ edition of Sight and Sound, the contemporary animator Ruth Lingford reflects on Reiniger as one of her ‘formidable female role-models’ in the 1980s, recalling that ‘animation seemed like a female-friendly art form, with its craft associations and its cottage-industry promise of self-sufficiency’(Lingford, 2015). Today, thanks to the rise of the Internet (particularly social media and the proliferation of video hosting websites), Reiniger’s silhouette films are being received by a whole new audience base. Her preference for small-scale filmmaking and independence are often championed in recent publicity, such as the commemorative ‘Google Doodle’ film in 2016 which opens with a silhouette Reiniger in her typical, homely production context. 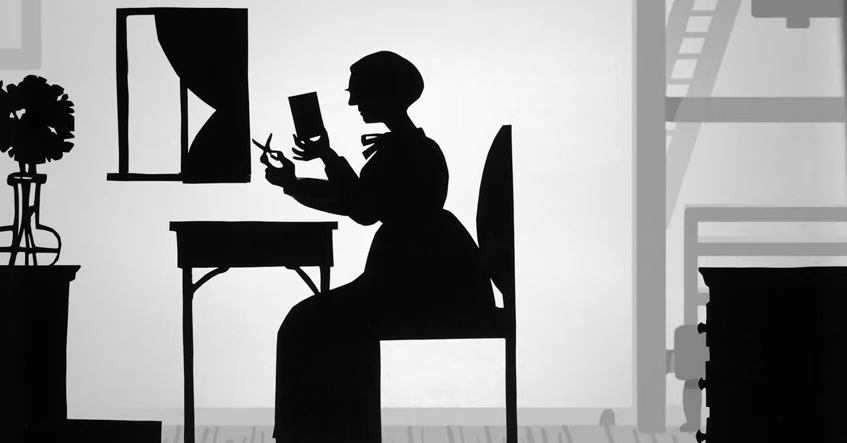 Throughout her long career from 1919 to 1980, Reiniger was keen to share techniques and encourage a ‘Do-It-Yourself’ approach to silhouette filmmaking. Publishing a multitude of ‘How-To’ guides in magazines and journals – as well as her own book on Shadow Theatres and Shadow Films (1970) – the documentary The Art of Lotte Reiniger (1970, by John Isaacs) captures the animator in her seventies explaining to her audience:

This is the trick table. If you don’t have such a thing at home, you take your best dining table, cut a hole into it, put a glass plate over it, and over the glass plate some transparent paper.

Reiniger’s instructions here are wonderfully subversive, a display of characteristic wit loaded with a strong, feminist message. Just as her contemporary Hannah Höch reclaims the kitchen knife in the seminal photomontage, Cut with the Kitchen Knife Dada Through the Last Weimar Beer-Belly Cultural Epoch of Germany, 1919-1920, Reiniger calls on others to reclaim the dining table, literally cutting through this symbol of domesticity to make space for innovation and autonomy. Returning to Siegfried Kracauer’s comment, by framing Reiniger as an artisan, his ‘tiny realm’ becomes an accurate allusion to her usual production setting, whether her home-studio Tricktisch or the tiny garden shed in Potsdam where Reiniger and her team produced Prince Achmed between 1923 and 1926. Echoing Virginia Woolf’s powerful treatise on creativity and independence in A Room of One’s Own (1929), Kracauer’s image of Reiniger ‘in a tiny realm of her own’ thus becomes an apt acknowledgement of this unusual yet highly important filmmaker.

Tashi Petter is a doctoral candidate in the department of Film Studies, Queen Mary University of London. Her thesis explores the German animator Lotte Reiniger with a focus on Reiniger’s interwar films, her time as an émigré in London and her engagement with folk modernism. Her wider research interests include interwar advertising film, twentieth-century women artists and literary modernisms. She has recently curated screenings of Reiniger’s lesser-known shorts in London.

9 responses to “‘In a Tiny Realm of Her Own’: Lotte Reiniger, Domesticity and Creativity”