Last year, Studio Ghibli’s producer, Yoshiaki Nishimura, caused something of a stir when he stated that whether or not Ghibli would hire a female director would depend on the type of film it would be produced. He stated: “Women tend to be more realistic … Men on the other hand tend to be more idealistic – and fantasy films need that idealistic approach. I don’t think it’s a coincidence men are picked.”[1] He later offered an apology for these remarks,[2] but this incident was a reminder of a disappointing reality: there has never been a Ghibli film directed by a woman.

Of course, this fact does not take away from the accomplishments of the studio or the acclaim its features have received. The films of Hayao Miyazaki (and of the Studio Ghibli in general) are often praised for their portrayal of girls and women, including on this blog. There is plenty of material to show what Miyazaki thinks of female characters (beyond the analyses of his films) that provides a fascinating insight. For instance, when once asked why he always has girls as his main characters, he has responded,

At first I thought, “It’s no longer a man’s world; no longer an age when just causes are relevant.” But after ten years, it seems silly to keep saying that. So now, when people ask me your question, I just respond, “Because I like girls.” That answer seems more real.[3]

The films of Isao Takahata too present nuanced depictions of female characters at different stages in their lives. This is for instance what occurs in Only Yesterday (1991) and The Tale of the Princess Kaguya (2013).

However, although much is made of the on-screen women of Ghibli, less is said about those behind the scenes. One of my favorite anecdotes from Miyazaki is that of the ‘Woman Finish Inspector’[4]. Miyazaki describes meeting the woman finish inspector (he does not give her name) at the same studio where he and Takahata began production on Heidi (1974). As he describes it, the role of the finish inspector is to check the work of the colored animation cells, making sure there are no mistakes or dirt and scratches. When he first met her, this woman was checking six to seven thousand cells each week, living on tea and biscuits, and two hours of sleep a night. He tells us how she eventually collapsed from exhaustion and was taken to hospital. He then recalls about when he went to visit her: ‘she was cheerful as usual, telling me, “I’ll be better very soon.”’[5]  The quote that strikes me the most of this story is this: “Men could do it, but for some reason all finish inspectors seem to be women.”[6] Kirsten Thompson has already examined the historically gendered nature of the relationship between female labor and color production in animation, with close regard to the Disney studios.[7] Thompson’s description of the early Hollywood animation industry as “a labor force segregated by gender” would seem to apply here as well.

The finish inspector in Miyazaki’s story did not go on to work at Ghibli, and he never worked with her again, but other women have certainly made an impact at this studio. Michiyo Yasuda, who began in the ink and paint department at Toei Animation, first worked with both Miyazaki and Takahata in 1968. She went on to be leading color designer/color director at Ghibli, working on such films as Grave of the Fireflies (1988), Kiki’s Delivery Service (1989), Porco Rosso (1992) and Ponyo (2008), to name only a few[8]. She passed away in 2016 at the age of 77. 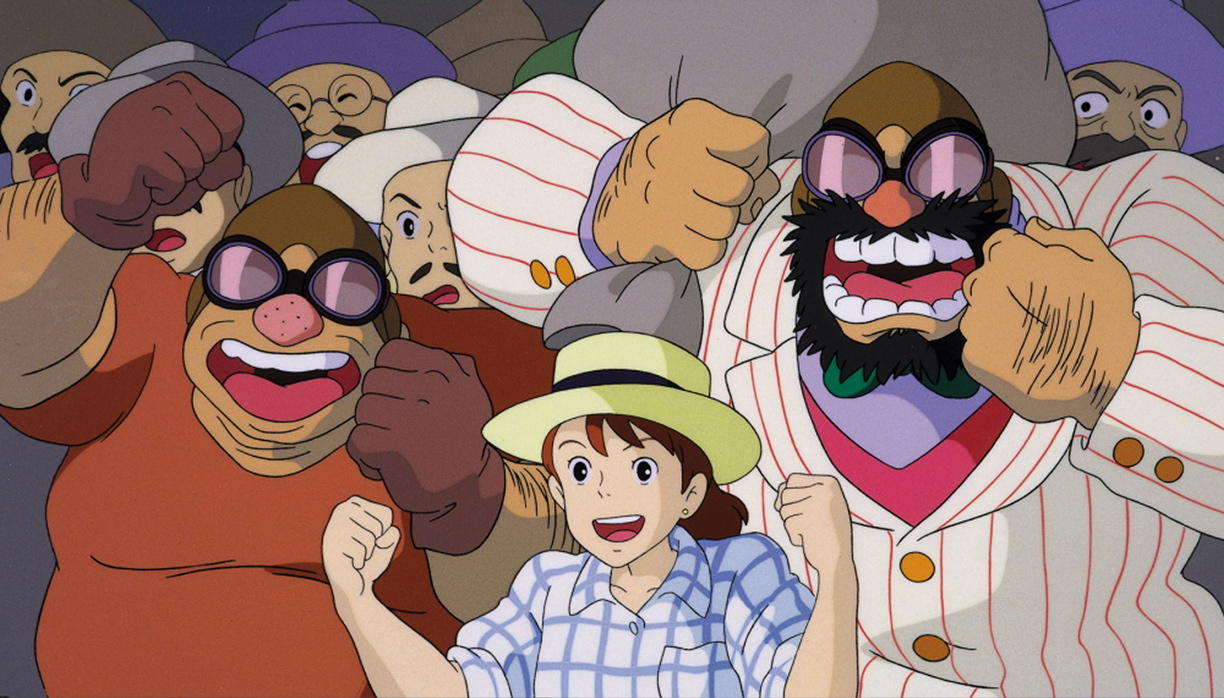 A shot from Porco Rosso (1992) portraying Fio, a character on which have worked both Michiyo Yasuda and Makiko Futaki

Makiko Futaki was another woman to make an impact at Ghibli. Miyazaki’s thoughts on her work are also to be found within Starting Point[9]. He writes about her skills as an animator: “I think the excellence of Futaki-san’s animation lies in her effort to express not only the visual but also the tactile effect”[10]. He praises her work on several of his films, among which is Porco Rosso. Futaki also sadly passed away in 2016 at the age of 57.

The recent focus on women in animation has allowed to reveal the invisible history of women in animation and to celebrate the contributions they have made. And, whilst Ghibli have not had a female director, it is important we don’t accidentally erase or forget the impact of the women behind the scenes there too.

Ruth Richards is a PhD Candidate in the School of Media and Communication at RMIT University. Her research explores how feminist theory of the body and materiality can be taken up by animation theory. Her favorite Ghibli films are Spirited Away and Kiki’s Delivery Service.

[8]For an insight into her process, see this interview with Yasuda that was published in the Los Angeles Times http://articles.latimes.com/2009/aug/16/entertainment/ca-workinghollywood16 (Accessed 5th September 2017).

3 responses to “The Women of Studio Ghibli”