Created during the height of the Second Sino-Japanese War, Tiě shàn gōngzhǔ (Princess Iron Fan, 1941, by Wan Guchan and Wan Laiming) was the first full-length animated feature film made in China, as well as the first in Asia. Princess Iron Fan – whose fan is actually a magically bamboo leaf that springs from a pearl she hides in her mouth – is based on one of the four 1592 Chinese novels, Journey to the West. This novel details the exploits and adventures of the Monkey King, Sun Wukong. The Monkey King is one of the disciples of Tripitaka, the Buddhist monk. The group is traveling west to search for the authentic Buddhist scriptures. As the introduction to the film indicates, Princess Iron Fan (and the book it is based on) is not fantasy, but an exploration of the daily struggles to survive.[i] The narrative’s focus on oppressed versus oppressor was reflective of the times in which the film was made and the lives of the filmmakers. 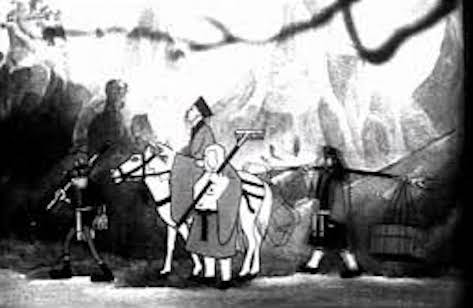 The Wan Brothers – Wan Laiming, his twin Wan Guchan, Wan Chaochen, and Wan Dihuan – were the first individuals to create animated products on a regular basis in China. While their father wanted them to follow in his educated, businessman footsteps, their mother encouraged them to cut paper into shapes and use them in puppet shows.[ii] 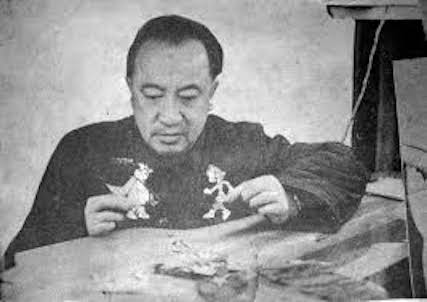 The brothers showed more aptitude for art than business. So, when the family moved to Shanghai, Wan Laiming took a job at the Shanghai Commercial Press, where he began to make his own animated films. His brothers joined him after they graduated from art school and they made, in 1925, the animated advertisement, Shuz Hendong Chinese Typewriter for the Great Wall Film Company.[iii] The Second Sino-Japanese War, however, caused the Wan Brothers to leave Shanghai and start creating propaganda films. In 1940, they returned to Shanghai and began working on Princess Iron Fan.

The film took sixteen months to create, and over 200 artists were employed to tell the story of the Monkey King’s attempt to borrow a magical fan that can put out the fire that is blocking his traveling party’s mountain route. Princess Iron Fan is angry with the Monkey King as he is responsible for forcing her son into servitude. The Princess tries to kill the Monkey King with her sword, but she cannot, as he has magical powers as well. Wan Laiming in an interview about the film indicated that the Monkey King is a lively prankster who can change shape 72 times and become invisible at will.[iv] 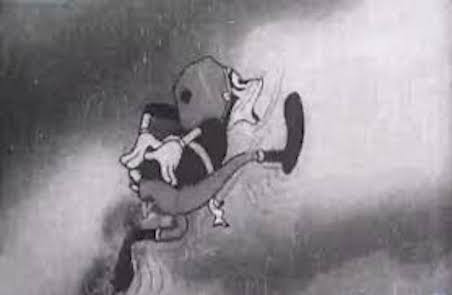 Fig. 3 One of Monkey King’s antics

The Princess will not lend him the fan and tries to blow him away, but the Buddha gives him a wind-calming pearl that prevents her from being able to blow him away again. At one point, the Monkey King changes into a bug and is swallowed by the Princess. The drawings of the interior portions of her body are fairly graphic in their realism. The bug causes Princess Iron Fan great pain. 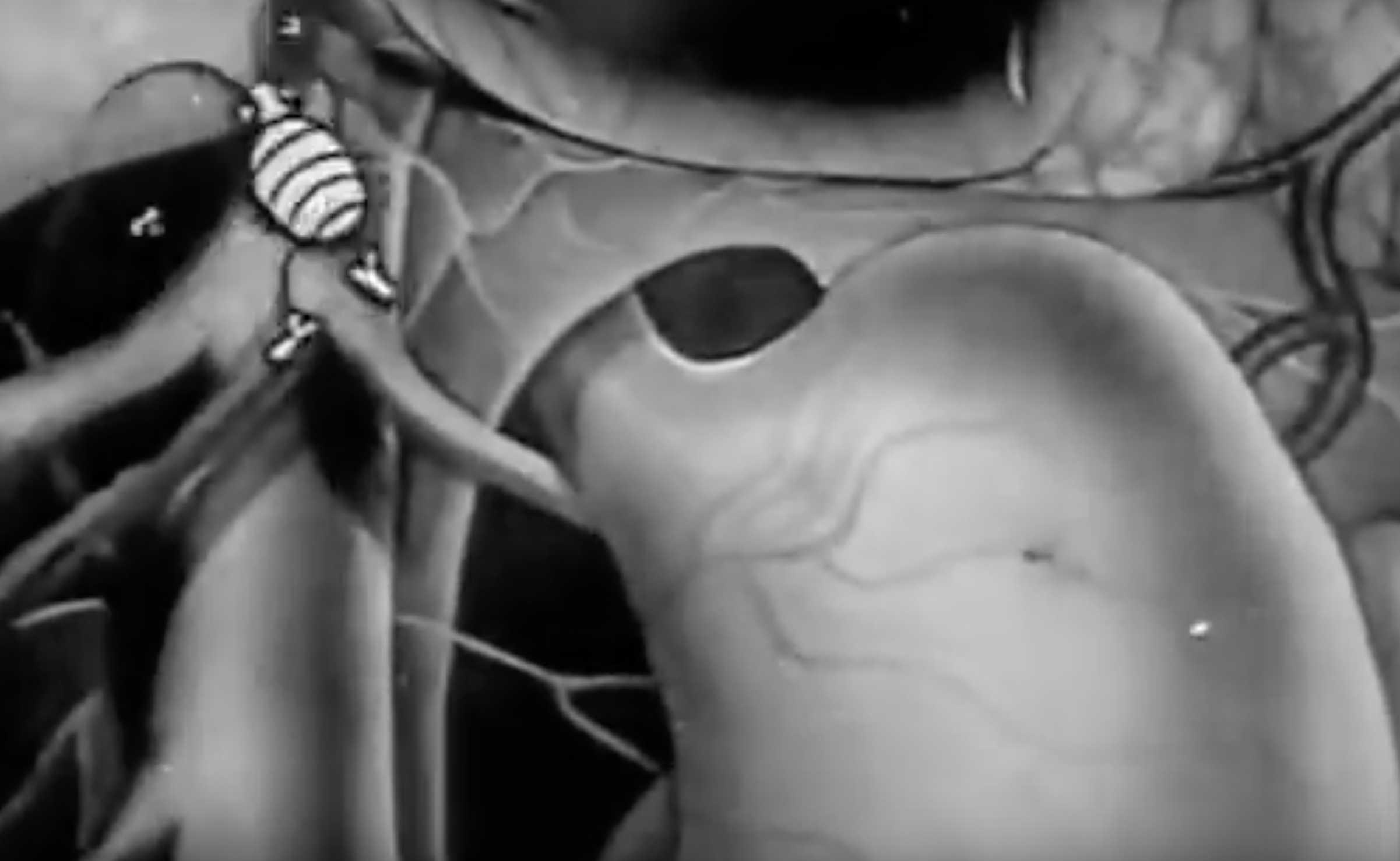 Eventually, it is the Pig who is successful in getting the fan as he shape-shifts to look like Princess Iron Fan’s husband, the Bull King. In this disguise, he tricks her into giving him the pearl that is the fan and to tell him how to transform it. After a battle with the real Bull King, the travelers use the fan to put out the flames and are able to continue their journey.

The Wan Brothers were inspired to make the Princess Iron Fan after viewing Walt Disney’s Snow White and the Seven Dwarfs (1937, by David Hand). While the film is black and white, some of Disney’s themes, such as slap-stick humor, anthropomorphized animals, love, team-work, and happy endings are very evident. The visual aesthetic, however, is more in line with that of the Silly Symphonies (1929-1938) and the early Mickey Mouse works or of Max Fleischer’s Out of the Ink Well (1918-1929). Characters undergo metamorphosis to allow for quick movements. For example, when the princess changes into her armor, her body becomes snake-like as she moves through the air to enter the garment. 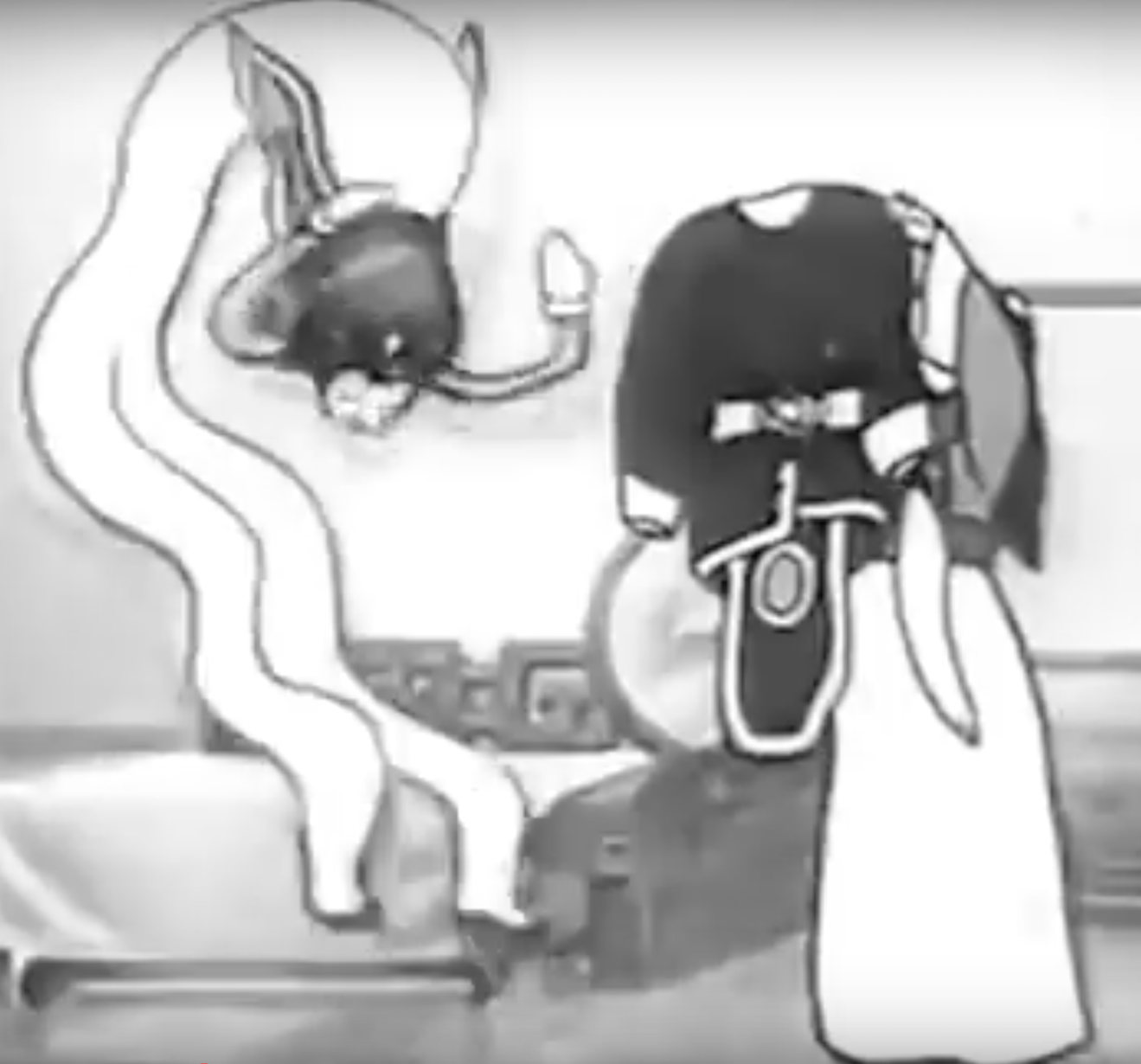 Fig. 5. The princess’ body becomes snake-like as she wears her armor.

The Wan Brothers utilized rotoscoping (a technique patented in 1915 by Fleisher, where live-action film is projected one frame at a time for the animator to trace over as a way to create more life-like movement) throughout the film, but drew from traditional Chinese Opera for the movies’s score.[v]

Princess Iron Fan was extremely influential within China, but it also impacted other countries when it was exported beginning in 1942. The film prompted the Japanese Navy to commission in 1945 its own animated film, Momotarō: Umi no Shinpei (Momotaro’s Divine Sea Warriors, by Mitsuyo Seo), which became the first ever animated feature in Japan.[vi] This is somewhat ironic as the Wan Brothers intended Princess Iron Fan to be viewed as a protest against the Japanese, as they placed images of the reality of daily violence throughout the film.[vii] In addition, a 16-year old Osamu Tezuka, creator of Astro Boy, saw the film and later credited it for inspiring him to become a manga artist. 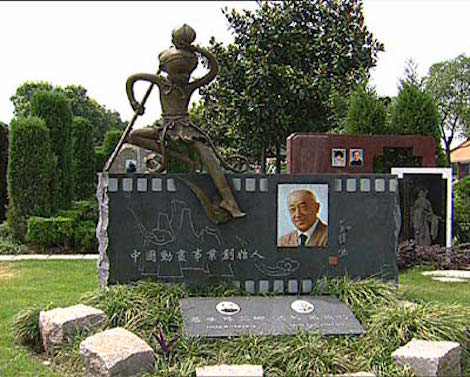 In 1980, the Chinese government honored the Wan Brothers for devoting their lives to the arts and filmmaking. Perhaps the importance they have had it is best stated on Wan Laiming’s tombstone, where is written: “Founder of the Chinese Animation Industry.”[viii]

Dr. Pamela C O’Brien is an Associate Professor and Chair of the Communication Arts Department at Notre Dame of Maryland University. She has been researching and presenting about animation for over 25 years. She is a critical cultural scholar who studies adult-oriented TV animation, Disney feature-length animation (especially how and why Disney altered classic fairy tales), and the history of TV animation. She also researches social media and co-founded the Social Media Technology Conference and Workshop. This is her second entry for animationstudies 2.0.