After observing the terrified expression on the face of yet another film student as I attempted to teach to them how to use a location sound mixer, it struck me that for animation and film students accustomed to working visually; the abstract notion of sound can be daunting. Yet, sound also has a visual component to it.  One only has to examine the optical soundtrack of film stock to realise that it enjoys a graphic visual representation in the form of waves and shapes to the extent that a number of animators and filmmakers have attempted to imprint it directly onto the film soundtrack.

Two different schools of thought emerged surrounding the animated synthetic soundtrack in the early twentieth century.  The first, developed by engineer Rudolf Pfenninger, attempted to codify sound into tonal patterns that could be consistently reproduced into a type of sound writing. The second type of synthetic sound, developed by Oskar Fischinger in his animated sound experiments, was designed to explore the relationship between graphic forms and their auditory counterparts and attempted to create what Richard S. James refers to as “visual calligraphy”[1] by photographing shapes onto the soundtrack in order to see what sound they produced.

Using precise waveforms that functioned as templates for exact tones, Pfenninger essentially created a standardised form of acoustic writing that could be universally reproduced by other sound-on-film composers or animators, allowing subsequent animators such as Norman McLaren to develop their own templates that produced identical tones to those of Pfenninger.  The first part of this two-part blog will focus on the notion of animated sound as a sound writing by paying attention to Norman McLaren’s use of animated sound in Synchromy (1971). 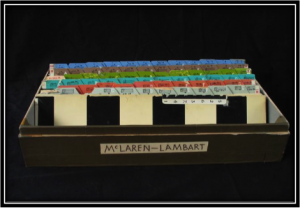 Box containing the 73 square wave cards used by McLaren in his composition of animated sound. Note the musical note marked on the index card sseparating each of the square wave cards© 2005 NFB – Photo Nicole Périat 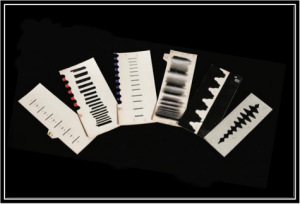 Although McLaren began to experiment with animated sound in the 1930s, scratching and drawing onto the soundtrack for films such as Dots, Loops, Allegro and Rumba, he developed a more  systematic technique of creating animated soundtracks in the 1940s.  Inspired by Pfenninger’s method, he created a library of 1” by 12” strips with 1 to 120 repetitions of hand-drawn sound wave patterns that could produce every semi-tone across a five octave range, which he used to great effect in films such as Now is the Time (1951), Two Bagatelles (1952), his Oscar winning blend of pixilation animation and lived-action, Neighbours (1952) and Blinkity Blink (1955).  Synchromy, however, was to be the pinnacle of his exploration of the synthetic soundtrack.  McLaren photographed the images that produce the individual musical notes onto the optical soundtrack.  He then photographed this hand drawn soundtrack onto the visual track of the celluloid so that the audience is bearing witness to a visual representation of the soundtrack on screen.

Through his experiments with hand-written music McLaren ultimately developed two types of sound wave patterns that he used in his films with synthetic soundtracks.  For example, in Neighbours (1952) McLaren used soft-edged swelling stripes that correspond roughly to non-sinusoidal saw-tooth sound waves.  Synchromy, conversely, employs square wave cards formed from simple hard-edged black and white stripes that correspond acoustically to square sound waves. By rounding off the edges of the saw-tooth waves McLaren was changing the shape of the sound waves and therefore the tone produced by the waves.

The tones in Synchromy bear an uncanny similarity to those produced in chiptune or 8-Bit music produced by the sound chips in domestic computer and computer game systems that were pre-dominantly manufactured in the 1980s and 1990s.

Dr. Aimee Mollaghan is the BA with film studies co-ordinator at the Huston School of Film and Digital Media, N.U.I. Galway in Ireland.  She holds a PhD on visual music animation co-supervised between the University of Glasgow and Glasgow School of art, an MPhil from the Digital Design Studio at Glasgow School of Art and a BA in Film Production from University of Wales, Newport. Her research interests include exploring conceptions of sound and soundscape across disciplinary boundaries. She is also interested in notions of psychogeography and soundscape in British and Irish film.