Direct animation possesses certain inherent qualities, such as immediacy, accelerated kinesis, and improvisational flow that I would like to suggest can correspond isomorphically to the extemporised uptempo meters of particular forms of jazz music. Gestalt theorist Rudolf Arnheim describes the concept of isomorphism as ‘the structural kinship between the stimulus pattern and the expression it conveys.’[1] It refers to the ‘similarity of structure in materially disparate media,’ suggesting that ‘such structural kinship is so compelling precisely [in] that it is directly and spontaneously experienced.’[2] That is, the forms of sensory stimuli in works that blend direct animation and jazz can complement each other in ways that seem to ‘go together’ in a seemingly natural and sensorially satisfying way. Furthermore, I argue that this isomorphism partly explains why watching such animations can feel like watching a kind of dance that has been abstracted into pure movement. Directly animated images are rhythmically and graphically able to respond to certain forms of ‘undanceable’ jazz, such as bebop, with a precision of timing and freedom of movement that no physical dancer could achieve. Daniel Belgrad has observed that ‘the polyrhythmic complexity and irregular phrasings that characterize bebop jazz are signals that the music is meant for listening and not for dancing […] Listeners […] ha[ve] to pitch their attention at a high level of nervous excitement.’[3] Animated lines and shapes are weightless and mercurial enough to match the movements of fluttering fingers and vibrating air.

Norman McLaren created a number of direct animations set to jazz music, including Boogie-Doodle (1941), Begone Dull Care (1949), Short and Suite (1959). In this post I want to look briefly at Begone Dull Care as a particularly good example of visual music where the responsive dance-like movements to jazz music are expressed graphically by means of the direct animation technique. I propose to conceive of this work by McLaren as an expressive response to its musical soundtrack, as if the interior, energetic sensations of listening to music are being manifested in the movements of the animated imagery.

The eight-minute film and accompanying music have a three-part structure, with two fast-paced bebop-style passages bracketing a slow movement in the middle. McLaren closely synchronized his imagery to the music, declaring, ‘for myself, indeed, with an abstract film, the most pleasing forms are those which come closest to music. There must be visual equivalence.’[4] Because the soundtrack (produced by the Oscar Peterson Trio especially for McLaren) is composed of largely percussive rhythms and repetitive, very short melodic phrases, McLaren’s flashing imagery is episodic, achieved by a combination of painting on clear 35mm leader and by scratching on black leader (both across frames and frame by frame). In the first part of the animation, Peterson’s piano playing quickly moves between rapid trilling and more punchy, staccato phrases, and during these latter segments McLaren’s scratched patterns pulse in time with the music, appearing as if caused by the sound itself. For the more uptempo piano sections, McLaren painted fluidly along the length of the filmstrip, creating vertical undulating lines that run seamlessly across frames to give a steady sense of nervous wiggle to the frenetic music. The timing in the film is precise, and the rapid-fire cadences of the music and the fluttering imagery serve to keep listeners engaged and in the moment. 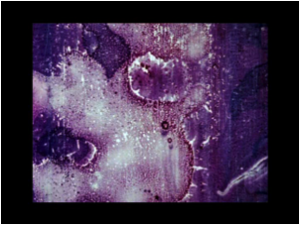 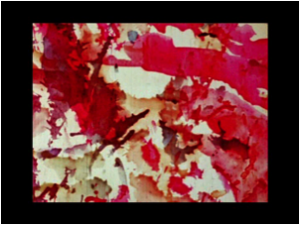 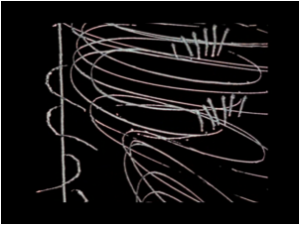 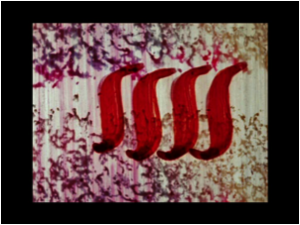 The second section of the film is set to a much slower, almost languorous piece of music with a stronger sense of melodic line carried through on the upper octaves of the piano. For this part of the film McLaren strips down his imagery to its most essential, scratching images of dots and lines in black leader that elegantly intertwine and seem to delicately swirl around each other in the black, surrounding space. At points, the white of the scratch marks seem at times to sparkle in isomorphic harmony with the twinkling quality of the piano’s highest notes. 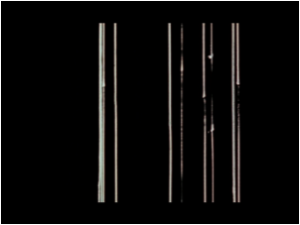 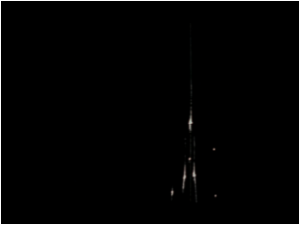 In the third section Peterson’s staccato piano playing is silvery quick, trilling up and down the keyboard seemingly as fast as human fingers can go. Thus McLaren reverts to textured, painted imagery that speeds and flickers in time to the music, making use of the inherent speed and rhythm of the film projection to produce the impression of precise synchronicity. Even when it provides an imperfect rhythmic match, it appears to create its own counterpoints and polyrhythms. 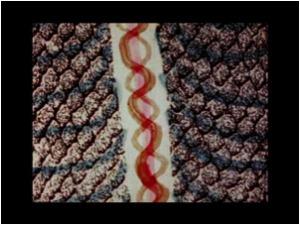 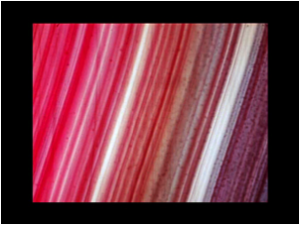 The relationship between soundtrack and imagery in Begone Dull Care is so immediate that listening becomes a mode of seeing just as seeing augments listening. The phenomenological experience of listening to music is fused with responsive dance-like movements as they are felt inside our bodies. The musical soundtrack acts phenomenologically as a bridge between artist and spectator, in the sense that the song that McLaren responds to is the same song that spectators hear. It is this sense of inner movement, or inward dance, that I suggest is being expressed by McLaren’s imagery.

* The ideas presented in this post are part of the author’s larger project that employs the proto-phenomenological notion of Einfühlung (empathy) to examine the modes of spectatorship invited by the jazz-led direct animations of Canadian experimental filmmaker Steven Woloshen.

Lilly Husbands is a doctoral candidate in Film Studies at King’s College London. Her research is concerned with closely investigating contemporary North American and British works of experimental animation, focusing particularly on the varieties of non-normative aesthetic experience that such works invite and cultivate. She is the author of ‘The Meta-Physics of Data: Philosophical Science in Semiconductor’s Animated Videos,’ Moving Image Review & Art Journal (MIRAJ), October 2013, 2:2.

[3] Daniel Belgrad, The Culture of Spontaneity: Improvisation and the Arts in Postwar America (Chicago: University of Chicago, 1998), 187.