It seems unimaginable that Norman McLaren might have once relinquished animation for still imagery. Perhaps more shocking still, the illustrious Scot had already begun his decades long career at the National Film Board of Canada when a new non-moving vocation nearly overtook him. What turned the head of the man that John Grierson once called the “most protected artist in the history of cinema”?[i] Why, it was the old-fashioned stereoscope he picked up in a junk store in 1943. 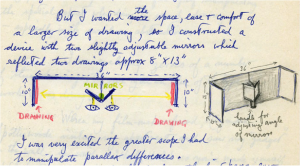 Figure 1: extract from a letter written by Norman McLaren to Harold Layer in 1980 containing drawings pertaining to his 3D experiments

As McLaren would later write to fellow 3-D aficionado Harold Layer, he began drawing postcard-size stereoscopic pairs for his Victorian handheld viewer, and later designed a contraption with mirrors to help him experiment with larger images in his off-hours (see figure 1 above). Drawing stereoscopic geometry to compete with monocular depth cues such as “blocking” and “diminishment,” and creating iridescent effects through binocular colour disparity, in his pursuance of “stereographic art,” McLaren even drafted an application for a Guggenheim grant in 1946 thinking he might break from filmmaking. Yet perhaps “too engrossed in film,” he never did apply.  And despite imagining himself the inventor of a new kind of stereoscope and the first to draw images in depth by hand, McLaren had unwittingly recreated the 1838 apparatus and technique of Sir Charles Wheatstone– a fact pointed out to McLaren by fellow NFB filmmaker Raymond Spottiswoode on a visit to the animator’s Ottawa home.[ii]

Less than a decade later, Spottiswoode would supervise the stereoscopic program at the 1951 Festival of Britain and invite his former colleague to combine his passions for stereoscopy and animation for the occasion. McLaren complied with Around is Around (1951) and Now is the Time (to Put on Your 3D Glasses) (1951), two animated stereoscopic shorts made for presentation at the festival’s temporary Telekinema theatre, and a year later (in 1952), he supervised two more — O Canada (1952) directed by Evelyn Lambart and Twirligig (1952) directed by Gretta Ekman.

Around is Around presents the graceful arabesques of an oscilloscopic line, while Now is the Time features a whimsical figure dancing amidst layers of smiling suns and cartoon clouds, animated by drawing directly onto film. O Canada travels cross-country in a sequence of zooms through pastel-painted Canadian landmarks, and the abstract Twirligig transforms in stream of consciousness shapeshifting. Each film spotlights movement in depth, and significantly accomplished without a stereoscopic camera rig.

Working from a variety of animation, camera and optical printer techniques, McLaren and his team at the NFB developed a unique set of 3D processes, which the filmmaker described for the Journal of the SMPTE (December 1951) in an article that was soon after translated for Cahiers du Cinéma (August 1952).[iii] Who could have imagined that animators in Canada stood at the forefront of the midcentury stereoscopic boom most often associated with Hollywood films such as Creature from the Black Lagoon (1954)? The Board, however, did not keep its 3D glasses on for long. The NFB halted its stereoscopic experiments for decades after 1952, and McLaren swiftly ended his 3D filmmaking career. While the famous animator acknowledged that depth like colour could be an “added sensory element” for cinema, he averred, “Movement is still the guts of the film.” [iv] Still the maker of tesseract mobiles and four-dimensional drawings, McLaren returned to his Wheatstone stereoscope when he retired from filmmaking. Though one of the foremost practitioners of animation, he once stated, “Space to me is a kinetic experience.”[v]

Alison Reiko Loader is a lapsed National Film Board of Canada animation director who teaches at Concordia University. Instead of working diligently on her PhD dissertation on the camera obscura, she has been studying the 1950s stereoscopic productions of the NFB. Her research will be published in Animation Journal’s forthcoming special issue on Norman McLaren and presented at the SAS annual conference in Toronto this June. Having waited for years to see McLaren’s stereoscopic films, Alison once tried to imagine them by making her own 3D mashup of some of his other work. She did not have the NFB’s permission.

[ii] Most of the information about McLaren’s stereoscopic drawing comes from a letter written by Norman McLaren to Harold Layer, dated 8 August 1980. After Loader contacted him during the course of her research, Layer set up a website that features of 3D drawings and other letters sent to him by McLaren.