Norman McLaren infamously posits that he probably became a filmmaker because he had been unable to be a dancer or choreographer. While one can argue that the underlying concern of his work is movement, one can also posit that McLaren’s ballet films arose from his enduring interest in ballet as a temporal art form with its own medium specific qualities and concerns that could potentially be appropriated into film form.

A regular patron of the Royal Ballet in London during his time working for the GPO, McLaren continued to demonstrate an enduring appreciation of ballet throughout his life.  Russian choreographer and ballet master George Balanchine, with his capacity for moving between the high culture of classical ballet and the low culture of Broadway and Hollywood, held a particular fascination for McLaren to the extent that McLaren proposed a collaboration with Balanchine during the 1960s.  Although the project was to fall through, McLaren had shown Balanchine the multi-image tests for what would eventually become Pas de Deux in 1968. 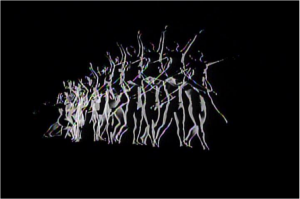 Superficially McLaren and Balanchine have much in common.  Like many members of the European artistic community they departed Europe in the wake of the 2nd World War for the shores of North America.  Both developed new systems for embodying movement and interior emotions within their chosen disciplines.  Both were highly musical with Balanchine, the son of a composer, training in counterpoint before pursuing his ballet education.  Further to this, both began to move toward temporal based work that eschewed narrative content in favour of form and style.

During his time as ballet master at the New York City ballet, the company that he established in 1948 with Lincoln Kerstein, Balanchine became known for his deconstruction of existing classical constraints, for his bold dynamic lines, seemingly endless extensions, the speed of his steps and for his rejection of narrative over form in his plotless or absolute ballets such as Concerto Barocco (1941) and Agon (1957). As Balanchine posits, “Dance can be enjoyed and understood without any verbal introduction or explanation. The important thing in ballet is the movement itself, as it is sound which is important in a symphony. A ballet may contain a story, but the visual spectacle, not the story, is the essential element.”[1]  This sentiment is echoed by McLaren, who asserts “I had always been interested in the ballet in its purest form, stripped of narrative and anecdotal conventions.  I like movement for movement’s sake.  Abstract ballet.”[2]

Both McLaren and Balanchine are, however, echoing wider trends within the arts in the early part of the twentieth century. Influenced by the increasingly asceticism of the plastic arts in the first half of the twentieth century, McLaren avers that from a certain point in time he began to pare back his work to its most basic elements, intimating that he came to understand and appreciate the work of painters such as Piet Mondriaan and locating himself as part of the broader modernist thinking during that period.  Although this impulse can be seen in his more Spartan films such as Lines Vertical (1960) and Lines Horizontal (1962) it is clearly an impetus behind his ballet films, particularly in regard to Pas de Deux, McLaren’s first overt ballet film.

Although his proposed collaboration with Balanchine fell through, Ludmilla Chiraeff, founder of the progressive ballet company Les Grands Ballets Canadiens de Montreal, eventually provided the choreography for Pas de Deux.  McLaren has stated that of all his films Pas de Deux is the one from which he derived the most pleasure.[3]  Despite its proliferation of images, it is arguably part of his process of aesthetic and philosophical distillation.  McLaren filmed the dancers in real-time and systematically slowed and multiplied the images to break down individual body movements. Shots were superimposed ten times on top themselves with a delay of five frames between each of these steps, resulting in a quarter second lag between what appeared to be the same image.

Another aspect of this artistic refinement is the stark expressionist quality of the film’s lighting.  For much the same reason that Balanchine infamously employed taller ballet dancer to execute his choreography, McLaren employed oblique rather than frontal lighting to avoid confusion between movements. As McLaren states, “I wanted to obtain an unrealised image which would present the very essence of the dancers and not simply their physique.  Aesthetically, the problem was to film and to grasp the very essence of movement.”[4] 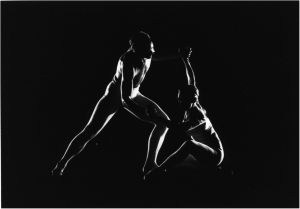 Although McLaren’s ballet films are often considered independently of his animation work, they do essentially engage with many of the same core concerns. McLaren’s assertion as to the plotless, abstract nature of the film notwithstanding, he has attested to the idea of relationships between two objects, continuously drawn to one another across his body of work.  The dancers in Pas de Deux eventually become abstract forms, their auras seeming to move through space and each other so that they become indivisible at points, in a manner similar to the fluid formations in his hand painted animations to express Madame Chiriaeff’s philosophy: “La danse, c’est le mouvement, et le mouvement, c’est la vie. (Dance is movement, and movement is life).”[5]

Dr. Aimee Mollaghan co-ordinates the MA Digital Media and BA with Film Studies at the Huston School of Film and Digital Media, NUI Galway.  She has keenly unco-ordinated at ballet classes for many years. This post is part of a larger enquiry into Norman McLaren’s dance films.

One response to “A Reflection On Norman McLaren, George Balanchine And Absolute Ballet”