The original series of Hideaki Anno’s hugely popular anime Neon Genesis Evangelion (1995-1996) was set in the aftermath of an apocalyptic event called ‘the second impact’. The show was structured around teenage protagonists piloting gargantuan mecha-organic bipeds (EVAs) in order to defend a futuristic version of Tokyo against mysterious extra-terrestrial invaders called Angels. Anno took a basic mecha template and subverted it by placing the action within a vast Blakean frame of reference that includes Buddhism, Shintoism and all three Abrahamic religions, as well as Gnosticism, Sartre, Freud, Lacan, and more. Thomas LaMarre calls this ‘a superplanar narrative structure with multiple frames of reference, each one equally salient, each promising a key to unravel the strands of narrative strewn across the series.’[i] Ironically, however, this proliferation of references does nothing to make the narrative more limpid. 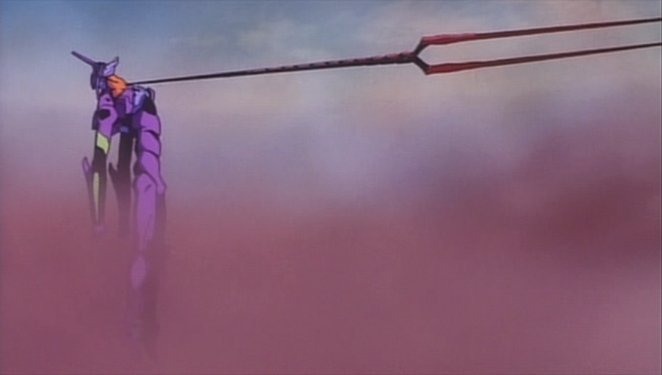 The series steadily builds up to a climactic battle, and it is revealed that the conflict between EVA and Angels is engineered as to bring about another Armageddon (the third impact) that will allow civilization to restart. However, to the dismay of Evangelion’s legions of fans, the final episodes neglected to show the final fight, and instead took place inside of the head of the main protagonist, Shinji Ikari.[ii] This ‘battle’ consists of Shinji asking himself various reflective questions (‘Who am I? Why do you pilot Eva?’), whilst the animation slowly deconstructs until we are presented with what are essentially stick figures. 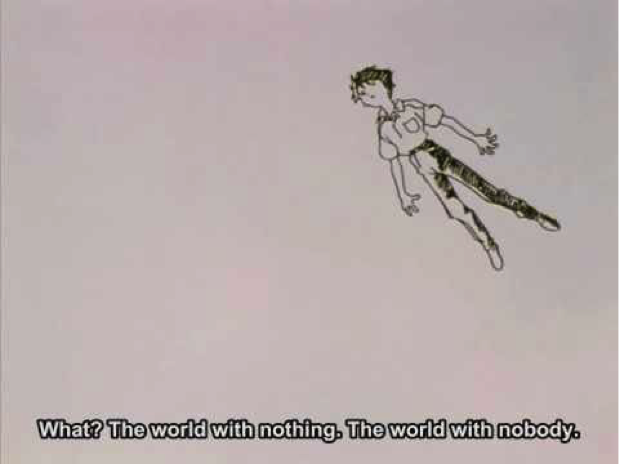 A frame from the battle scene

A 1997 feature film, The End of Evangelion, was released with the intention (as some have asserted) of placating the audience, in that it presents the action sequences of the climax which were omitted in the series. The result is bombastic battles, and over-the-top apocalyptic destruction playing out to Beethoven’s Ode to Joy. Such scenes are so excessive that I suspect that Anno was satirizing the public’s demands for a ‘proper’ conclusion.

In my research, I have been developing a concept I call ‘cinematic individuation’ – a technical individuation (creation of a mutual relation of affect) between spectator and film. This is a dual process of cerebral alienation coupled with a simultaneous emotive and physiological attraction. The End of Evangelion provides an example of this when it transgresses its animated boundaries and presents ‘reality’ – a sequence that stands in for much of the existential self-reflection of the controversial series finale.

Following the initiation of the ‘third impact’, the film suddenly cuts to a live action shot of an empty cinema. This is followed by a live-action montage of Tokyo streets, set to a piano instrumental version of Bach’s Jesu, Joy of Man’s Desiring. Throughout the sequence, voice-over and onscreen text show Shinji questioning the ‘reality’ of this live-action moment. The music fades, and the film cuts to the full auditorium. The expectant hum of the audience is now heard on the soundtrack. The sequence ends with a fade back to the empty cinema.

Through Shinji’s attempt to connect the animated sci-fi world of Evangelion to the ‘real world’ of his dreams in this sequence, the viewers are invited to examine their own reality and their relationship to the fictional world of the series. While this marks a startling change in medium, it is also a soothing moment of reflection where the music complements the imagery in tone and rhythm. So, whilst this nested scene is disruptive in terms of the film’s diegesis, it is considerably calmer and more coherent than the animated excess it interrupts. The imagery (light reflecting off water, power lines against blue sky, slowly moving trains, an empty swing, a cat, et al.) is entirely relaxing and meditative. The audience in the auditorium (maybe the disgruntled Otaku fans) fades away, and if cinematic individuation is operating, and we have been made aware of our status as audience members, our alienating self-consciousness also melts away. The scene is simultaneously an ironic, cameo strewn (the voice actors of three female leads appear, as do three women dressed as those characters), rupture that distances the viewer, but at the same time it invites the viewer to consider the questions it proposes, and to ultimately question their relationship with the film itself.

George Crosthwait is a PhD candidate at King’s College London where he also teaches film studies. His current research is concerned with cinematic representations of Hollywood in contemporary American cinema.

[ii] Lamarre and Hiroki Azuma have written in depth about NGE’s otaku following.