Netflix’s BoJack Horseman is many things: an amazing cartoon world where humans and anthropomorphic animals live in cohabitation; a pun-filled comedy that satirizes Hollywood culture; a sobering exploration of nihilism and depression. However, what distinguishes it from traditional animated sitcoms is how it incorporates seriality within its narrative form to compete in a post-network climate.[i] BoJack (Will Arnet), star of the 1990s sitcom Horsin’ Around, struggles throughout the series to keep his self-loathing cynicism separate from his work, as he tries to regain his cultural relevance through biographizing his life and becoming an ‘actor’. Creator Raphael Bob-Waksberg presents this journey through consistent character development, apt emotional intensity and narrative complexity, making BoJack Horseman stand out from the acclaimed crowd of animated sitcoms. 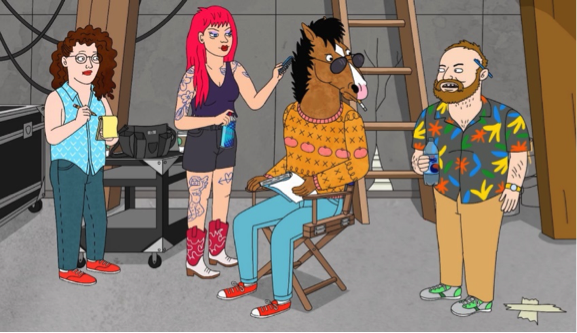 Before discussing animated seriality, we must define the term ‘serial’ against its counterpart. The television ‘series’ is a sequence of self-contained episodes where the outcome of one episode rarely impacts another. The “sit” (to the “com”) is recycled. Yet, events occur in a temporal vacuum, resulting in amnesiac characters. In contrast, serials are ongoing narratives with sequential story arcs and a lack of episodic closure.[ii] The classic sitcom functions as a series, garnering pleasure from repetition and a cyclical return to harmony. As a sub-genre of the sitcom, the ‘anicom’ largely follows this convention, from The Flintstones and The Jetsons, through to the “second era” of The Simpsons, South Park and King of the Hill. [iii] These anicoms all function narratively in accordance with episodic form, as Stan and Kyle regularly forget the “lessons” they have “learned today”, and Springfield is left in ruins recurrently, only for it to return to normality in the next episode. Often, episodes of The Simpsons or South Park will ironically present a rushed resolution to absurd narratives to parody the sitcom’s trope of wrapping every issue up neatly within 22 minutes. However, this is merely a play with series form, rather than serialization itself.

This lack of serialization in animated television doesn’t extend to the post-broadcast era. Recent developments in digitalization, narrowcasting and VOD content have blurred the lines between series and seriality on television, and animation is no different. Jason Mittell notes this as television’s extension towards ‘complexity’, where traditionally episodic narrative forms, such as the sitcom, are becoming increasingly serialized to engage audiences with formal creativity.[iv] BoJack Horseman employs such complexity in its use of flashbacks and consistent narrative arcs, used to intensify a sense of depth and realism. Likewise, its meticulous crafting of hidden sight gags and intertextual references encourages sequential binge-viewing. As Bob-Waksberg states:

“I really did try to cater the pitch for Netflix, and so I thought, what makes a good Netflix show? And, for me, it’s about these long arcs and serialized stories, and I feel I wouldn’t want to make a show for them that reset at the end of every episode.”[v]

Shot from episode 7 “Say Anything”, incorporating an ‘I’m A Zelda’ T-shirt, referring back to previous episodes and reminding viewers of Horsin’ Around

BoJack Horseman employs seriality, then, to further engage audiences in character development, using its cartoon aesthetic to ironically juxtapose humor with serial realism. This ironic commentary is heightened to parody when considering the show-within-a-show, Horsin’ Around. As the ‘credits’ suggest, the 90’s sitcom was traditionally upbeat, with a signature laugh track and 3 camera set up. It clearly reaffirms notions of “family”, “laughing” and “learning”, emphasizing the sitcom’s classic ideology.

BoJack Horseman takes until midway through its first season to become narratively complex, a decision made to ease viewers into the show.[vi] Episode 6, “Our Story is a D-Story”, sees BoJack both spontaneously buy a restaurant and steal the ‘D’ from the Hollywood sign to impress ghost-writer Diane (Alison Brie). These two events, unlike how they may appear in The Simpsons, never revert to normal, as Hollywood is subsequently forever referred to as “Hollywoo”, and BoJack has to infrequently tend to his business at the restaurant. This itself shows how BoJack Horseman separates itself from animation’s episodic traditions, revealing instead in narrative continuity for unexpected laughs.

However, it isn’t until “The Telescope” that serialization is employed for dramatic effect. “The Telescope” tells the backstory of how BoJack abandoned Herb, a character established as his former friend and co-worker on Horsin Around, until it cuts to present day. Upon visiting a dying Herb, BoJack seeks forgiveness for his misdeeds, but Herb denies him closure, stating with cruel intent that he “has to live with the shitty thing you did for the rest of your life.” Subsequently, a disheartened BoJack drives back to ‘Hollywoo’ and in his nihilistic state, kisses Diane, who swiftly rebuffs him. Suddenly, we’re at an unnerving end, and the credits begin to roll as BoJack stands lonesome before a darkly lit seafront. Clearly this rejects the closure-driven endings of anicom past. Likewise, “Horse Majeure” picks up right where “The Telescope” left off, as BoJack grapples with his love for Diane and his loneliness, a problem that is never resolved.

This is only representative of the serialization that the show has to offer, with later seasons embracing more elongated, interweaving storylines. Similarly, BoJack Horseman is only one example of serialized animation on contemporary television, with the equally existentialist Rick and Morty, espionage parody Archer, and even the last two seasons of South Park, utilizing seriality to tell a unique narrative. However, BoJack Horseman is perhaps the pinnacle of serialized anicoms offering viewers pleasures that run counter to tradition, fully embracing this narratively complex climate.

Liam Rogers is a BA Undergraduate student at the University of Warwick studying Film and Television studies. He is currently working on a dissertation project on narrative form and complexity within the American animated sitcom. Aside from animation studies, Liam is also interested in studying the contemporary television drama series, as well as film theory and philosophy. He has aspirations to further his academic research.