It is now five years since animation artist Don Hertzfeldt released his tragicomedy feature It’s Such a Beautiful Day (2012), which brings together his three short films Everything Will Be OK (2006), I Am So Proud of You (2008) and the 2011 short after which the trilogy is titled. The work thus exists (and has been a success) as serial shorts and as a feature-length film made using the same footage. Yet, it is a different experience, I argue, to view the work as serial episodes—whether years apart or ‘binged’—than to treat it as a movie. Normally, storytelling that spans over separate installments/episodes is structured differently from one-off films. Taking the understanding of ‘seriality’ from Television Studies in the sense of how a narrative arc is organized into subsequent episodes,[i] I want to look at this trilogy’s storytelling, and ask: what occurs to the way and the intensity with which this work conveys its narrative through animation when the seriality of the three episodes is seamlessly edited together into one film? Indeed, in light of Hertzfeldt’s recent release of an ‘episode two’ to his 2016 Oscar-nominated short World of Tomorrow, it is now apt to consider the question of seriality in his work.[ii]

Don Hertzfeldt is known for creating ostensibly simple, stick-figure style animated shorts that convey existentialist undercurrents – and outbursts thereof. The three installments of It’s Such a Beautiful Day were shot on 35mm and made combining his iconic pencil-drawn animation with photographed and live-action material, manipulated with in-camera techniques, and direct (drawn-on-film) animation. The trilogy traces the deteriorating psyche of the troubled stick-figure man Bill, who suffers from an obscure mental condition and ruminates on the mundanity of his life and existence. The Guardian’s reviewer David Jenkins notes that it has been compared to Terrence Malick’s The Tree of Life (2011) because ‘it is similarly structured as a catalogue of apparently banal vignettes and observations that, when stitched together, form an exhilarating tapestry of life’s unnoticed but vital minutiae’.[iii] It is this stitching together that warrants a closer look.

Short-form films—especially animated ones—tend to fall in the gap between film and other media studies. It’s Such a Beautiful Day is particularly odd, as it is not a one-off film nor simply a series of episodes. It is a trilogy of shorts made into a feature film. At a 2013 screening I co-organized, the audience’s response developed from bursts of laughter during parts one and two to increasingly muffled snickering as it progresses through to part three – as if unsure whether it is still ethical to be laughing at the gradually unfolding fate of this stick-figure man for whom we have come to feel dearly within the hour.[iv] This filmic experience is less seamless and likely different when watching the shorts apart from each other.

The shorts together form one narrative, and, as their title frames appear 30-60 seconds within each short, when watching the feature film, it is unclear exactly where one short ends and the other begins. Yet, each part has its own characteristics. The first, called ‘everything will be ok’ on its title frame, sketches the ordinariness of Bill’s life against his extraordinary mental experience. This is enhanced by the almost claustrophobic visual style of black backgrounds with cut-out blobs of pencil drawings on paper, combined with uses of photographed/live-action material and direct animation. 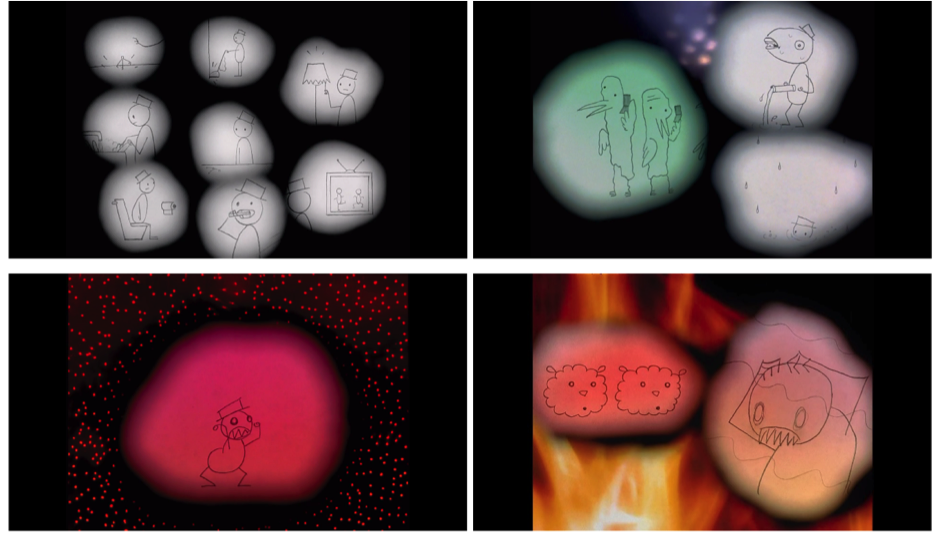 Frames from Everything Will Be OK

The second part, here titled ‘chapter 2’, takes place a year after Bill’s diagnosis and details his family history – and their mental oddities. The crumbling of Bill’s sanity develops over ‘chapter 2’ and ‘chapter 3’, showing increased use of said combined animation techniques, and more color and smudging. A ‘flashback’ in part two to his girlfriend breaking up with him seems identical to their lying in the grass together in part one (except here he is not wearing his hat). Settings such as Bill’s house and the bus stop and actions like vacuuming reoccur throughout the trilogy. Repetition of drawings frequently occurs within and between the parts. 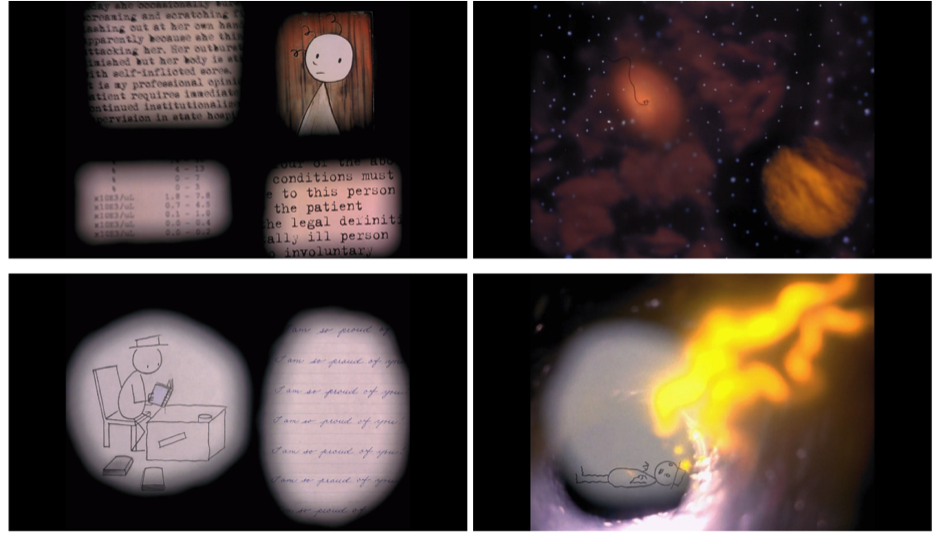 The premise of serial storytelling to show both repetition/continuity and progression/change is reflected by the trilogy’s focus on repetitiveness (in recurring drawings and in Bill’s everyday life) in relation to his deteriorating mind and memory.[v] In the first part, Bill’s always dropping his keys on the counter stands for habitual repetition, and he does this again when in the final chapter he returns home after having been hospitalized. Bill experiences his walks around the same block on ‘kind of a really nice day’ anew each time. As the narrative progresses, the worse Bill is doing, the more abstract is the use of direct animation and manipulated pictures. Acts and drawings are repeated while the mood and story gradually develop as his mind implodes. 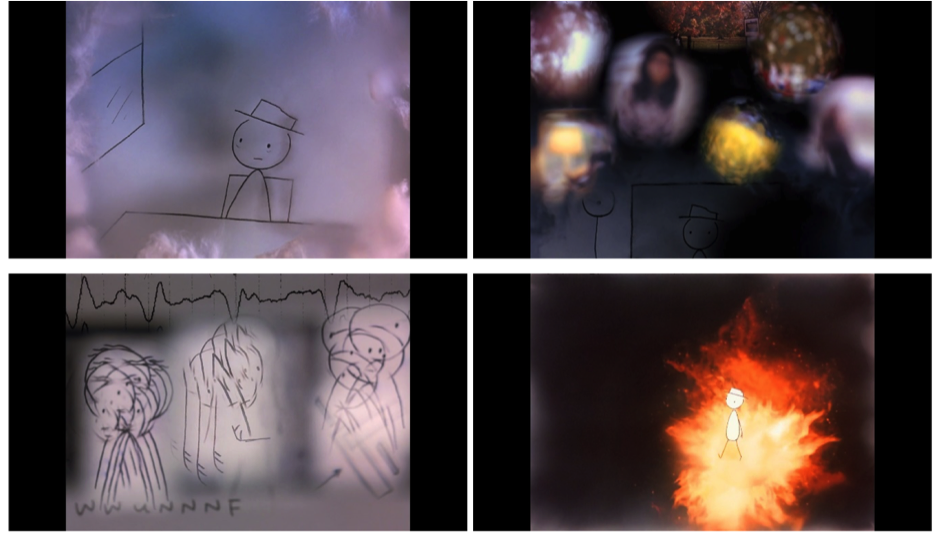 Frames from ‘chapter 3’ – It’s Such a Beautiful Day

The trilogy conveys a narrative of memory and mental illness through a combination of animation techniques and both a thematic and formal focus on repetition versus progression, which befits a structure of seriality. It re-uses aspects from earlier animated images, merges them with new ones, and innovates them to develop and intensify the narrative. Although this is common to one-offs as well as serials, recalling something from ‘the previous short’, with the shorts as separate episodes, has a different temporality and intensity from recalling it from ‘earlier in the film’. The bitter sense of being drawn into Bill’s decreasing grip on sanity grows and accumulates over the installments. When treating the work as a serial of shorts, this seems to happen more in ‘stages’, with stronger anticipation between episodes. When its seriality collapses into one smoothly edited film, the process seems to unfold more gradually and feel more overwhelming. Though both valid, these uses of the work can trigger different responses. Now we wait to see if World of Tomorrow will take on the same shape.

Josette Wolthuis is completing a PhD in Film and Television Studies at the University of Warwick (UK). She has a background in Cultural Studies and Art and Visual Culture research from Radboud University Nijmegen (NL). Next to her PhD and teaching at Warwick, she also teaches in Media Studies and Journalism at the University of Groningen (NL). Although her main research focuses on costume design in serial television, she also has a keen interest in animated short film. She was a film programmer and secretary of KloosterKino when they screened Hertzfeldt’s films, and has co-organised the Animation and Memory conference at Radboud University in June 2017.

[ii] There has been virtually no scholarly analysis of Hertzfeldt’s work, with the exception of Thomas J. Dempsey’s M.A. thesis ‘Becoming Bill: An Epistemological Look at the Career and Films of Don Hertzfeldt’ (Emory University, 2015).

[iv] This screening of It’s Such a Beautiful Day was organized by KloosterKino, a local initiative that curates and screens animated shorts, in collaboration with independent art space Extrapool on 29 March 2013 in Nijmegen, the Netherlands.

[v] Glen Creeber discusses this balance between continuity and progression (2004: 9).