In a clip hosted on Cartoon Brew’s website Caroline Leaf relates her process and the gestation of the mesmerising, darkly etched film Entre Deux Soers (Two Sisters, 1990) stating that her film took ten years to come to fruition. This revelation adds a hefty weight to the film, which contrasts with the technique she employed, etching directly into 70mm film emulsion.[1]

Len Lye and Norman McLaren both experimented with this technique. For instance, in A Colour Box (1936) Lye resorted to drawing directly on film stock, since he could not afford a camera.[2] The technique has been referred to as ‘anarchistic’ in Andrew R. Johnston’s article, “Signatures of Motion: Len Lye’s Scratch Films and the Energy of the Line”.[3]

The result in Entre Deux Soers is powerful in its simplicity. Each stroke resonates permanence. Etching directly on film stock seems apt for Leaf’s film, as it is visceral, the strokes highly visible allowing light to creep and bleed through the image. Leaf’s ability to draw the viewer in with this experimental technique conveys closeness, as though you were in the room with the two sisters, and it is compelling. The direct drawn-on-film technique she employs is arresting and results in uncomfortable viewing as the story unfolds. Leaf studied animation at Harvard University and was given free reign to experiment with techniques such as pixilation, stop motion and cut outs. She states on the Harvard Film Archive website:

The main goal was to make it move, and we believed Norman McLaren’s observation that what happens between the frames is more important than what happens on each frame.[4]

The isolated island existence of both Maria and Viola’s characters is conveyed sympathetically. Yet, they are in a dark and co-dependent relationship. Each has her own fear and is seemingly comfortable in the dimly lit world. One of the two, Viola is a writer with a disfigurement, kept hidden by her sister who rules the domestic set up with a sharp tongue and the keys to the outside world. 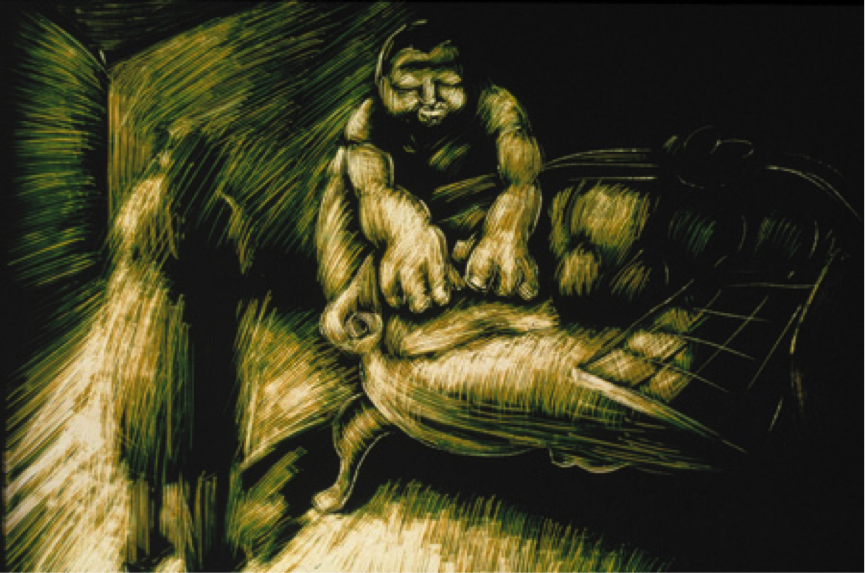 A shot from Entre Deux Soers

Fear enters the film as a stranger bursts in the sisters’ world and shines a light into Viola’s life quite literally. Viola writes in her book “to a stranger who sees me in sunlight”, perhaps to thank him for this. Retreating to her dark world with her sister she seems to be satisfied that someone has recognised her talent. Has she transcended her disfigurement? She has been seen and by a strange gaze. This stranger has made her real outside of the claustrophobic four walls of the sisters’ house. He is witness to her transformation. He also signifies danger in the scene where he breaks the cup, red spurting throughout the frame. The introduction of this stranger momentarily breaks their womb-like existence; Viola follows him and exits into the bright, white light outside. She basks in the sunlight after telling him to go. Her face relaxed and expression slack, highlighted by the lighter tones and smeary lines. In these frames of Viola outside with light shining on her she is illuminated, freed albeit momentarily. Back in the house she hums whilst she types. Dark domesticity is drawn in once more now that the stranger is safely out of the way. Their unsettling peace is restored. The sisters appear to be complicit in their reliance on each other. “Lucky I have you”, Viola says. “Me too, lucky I have you”, Maria replies. The house is reminiscent of an Ibsen set up. Their fears are contained once again, under lock and key.

The final scene with its bright strokes relates back to the beginning of the film, underlining the permanence of the situation through the unforgiving etching technique Leaf employed. The film is important to examine and reflect upon in relation to the theme of women and animation as Leaf’s narrative explores a relationship between two women, sisters in one setting against a background of love and fear, with one threat. Nothing has changed but everything is brighter.

Kate Corbin is the Campus Academic Coordinator at SAE, Liverpool. She was awarded her MA in Computer Animation from C.N.B.D.I., France. She has industry experience as an in-game and full motion video animator for Sony Computer Entertainment Europe and specialises in digital animation. Magazine publications include articles in Imagine and 3D World on behalf of WAK Studios. Kate has secured funding from Screen Yorkshire and The Arts Council Lottery Fund for short film animation production.

One response to “Lighting the Darkness: An Exploration of Caroline Leaf’s Entre Deux Soers (Two Sisters, 1990)”