Last month, I wrapped up a PhD thesis looking at DreamWorks’ influence on the prevailing aesthetic trends in the American computer-animated features of the 21st century. I have spent many words examining how, with films like Antz (1998), Shrek (2001), Shark Tale (2004) and Bee Movie (2007), DreamWorks introduced layers of irony and intertextuality into mainstream theatrical animation, codifying the CGI feature as a space in which popular culture is remediated and re-contextualized to comic effect. What has struck me is that, over the course of my research, the remediation of DreamWorks’ films themselves by online fan subcultures has rapidly evolved. As a studio whose output once had little presence on nostalgia-baiting websites like Buzzfeed, DreamWorks has recently found itself at the centre of a wave of bizarre and ironic memes.

When I began my PhD in 2014, DreamWorks franchises like Shrek were conspicuous in their absence from an online landscape that so frequently traffics in nostalgic evocations of the media texts which defined the childhoods of the young adults whose interests fuel Internet culture. Unlike the work of Disney and Pixar, DreamWorks had left few footprints on websites like Buzzfeed and Tumblr which revolved around posting and reposting images and ‘memes’, often re-contextualizing images from popular media texts. The Disney Princess franchise, and in particular the films of the 1990s ‘Disney Renaissance’, have been popular source material for these sites. They have inspired personality quizzes, blogs and fanart, the latter of which typically reinterprets the princess line-up, casting them as Star Wars characters, fashion models (e.g. see fig. 1), or even Doctor Who incarnations. Disney content became so popular on sites like Buzzfeed that Disney worked their official blog, Oh My Disney, into a virtual Buzzfeed clone, imitating that website’s image-based posts and hyperbolic language. The ease with which Disney appropriated this style for their in-house marketing content speaks to the benign nostalgia and, frequently, outright reverence which characterized the approach to remediating and meme-ifying Disney texts on the mainstream internet.

DreamWorks’ films had, as of 2014, not reached the same level of saturation in the world of nostalgic online content. This is perhaps partly due to their having achieved prominence in the early 2000s, and therefore carrying associations for a slightly younger audience than Disney’s 1990s hits. However, despite this, DreamWorks movies like Shrek and Bee Movie were beginning to rise to ubiquity on certain corners of the Internet. ShrekChan, a now-defunct image board emerging from the notorious 4Chan forum, was launched in 2012 to serve as a hub for bizarre memes and ‘copypasta’ stories based around the green ogre. By the time it closed in 2014, content like the disturbing, sexually explicit ‘Shrek Is Love, Shrek Is Life’ story, and the animation it inspired (see fig. 2) had reached more mainstream platforms like YouTube and Reddit. The notorious story finds a Shrek-obsessed teenager repeating the titular mantra as he is anally penetrated by the ogre. While it could generously be read as a caustic commentary on the franchise’s popularity, its primary purpose is clearly to shock audiences by placing a children’s character in a dark, adult context. 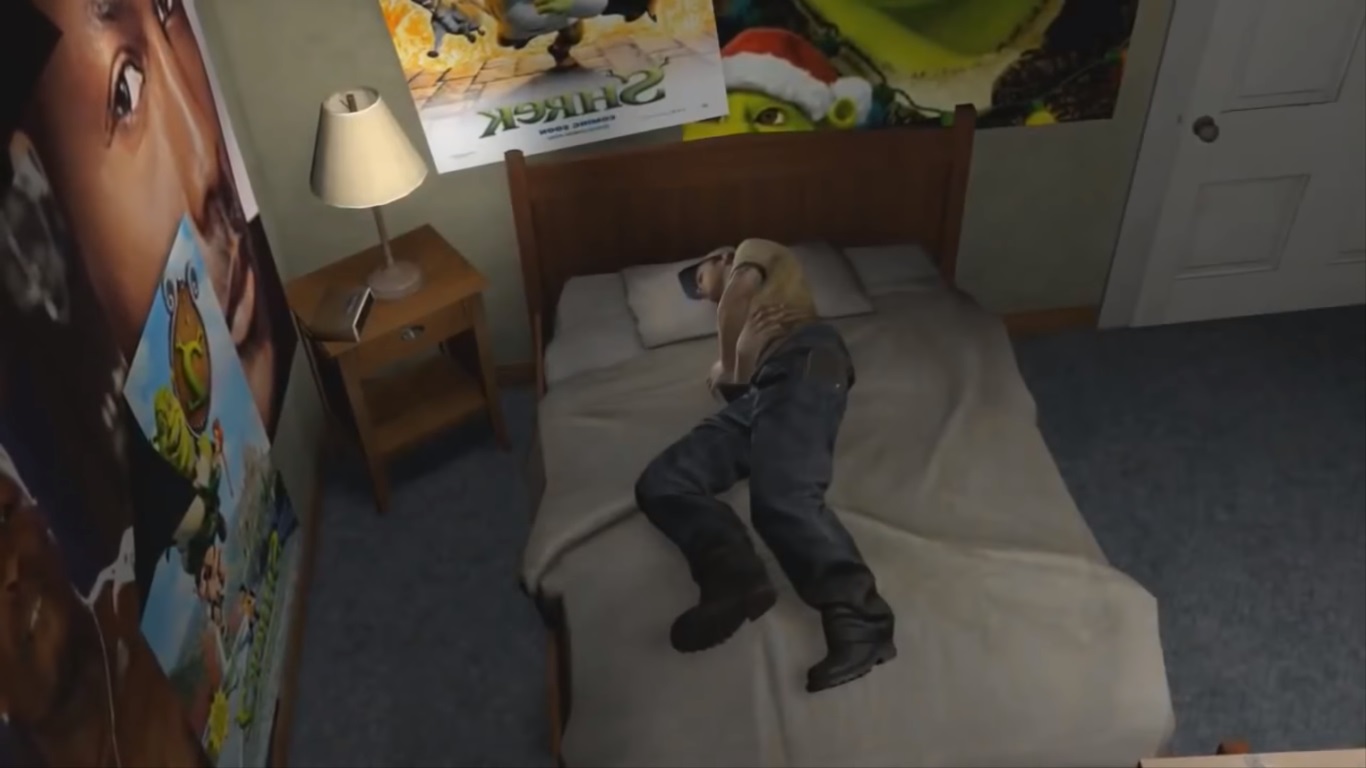 In the following years, other DreamWorks-related memes have proliferated. Some of the most popular revolve around an ironic appreciation of Bee Movie, extending to pasting its entire script into unexpected contexts, and remixing the film itself based around specific rules, with one of the most famous being ‘Bee Movie but whenever they say bee it speeds up’. ‘All Star’, the Smash Mouth song that serves as Shrek’s theme song, has also become a meme, the subject of many surreal covers, re-mixes and mash-ups. These musical memes can also revolve around the adherence to specific rules, as seen in one video which finds a man covering the song, while attaching clothes pins to his beard whenever he sings the word ‘the’ (see. fig. 4).

Recently, in contrast to the sincere appreciation of the films evident in much online fan content based on Disney texts, the remediation of DreamWorks’ output is marked by dense layers of cynicism, surrealism and ironic detachment. Memes based around Shrek, Bee Movie and ‘All Star’ range from gently mocking their subjects to reworking them into subtly, or even viscerally, disturbing new forms. This creates a compelling conclusion: that the sincerity and earnestness of Disney’s films has engendered a sincere and earnest fondness in their fans, whereas the layered irony and cynicism found in films like Shrek begs us to remediate them in ironic and cynical ways. In this way it is apt that Shrek himself seems to have become iconic of a certain mode of surreal and sarcastic meme-making rooted in a more complex nostalgia than that of Disney Princess personality quizzes: it mirrors the original film’s complex nostalgia for the Disney fairy tales themselves. 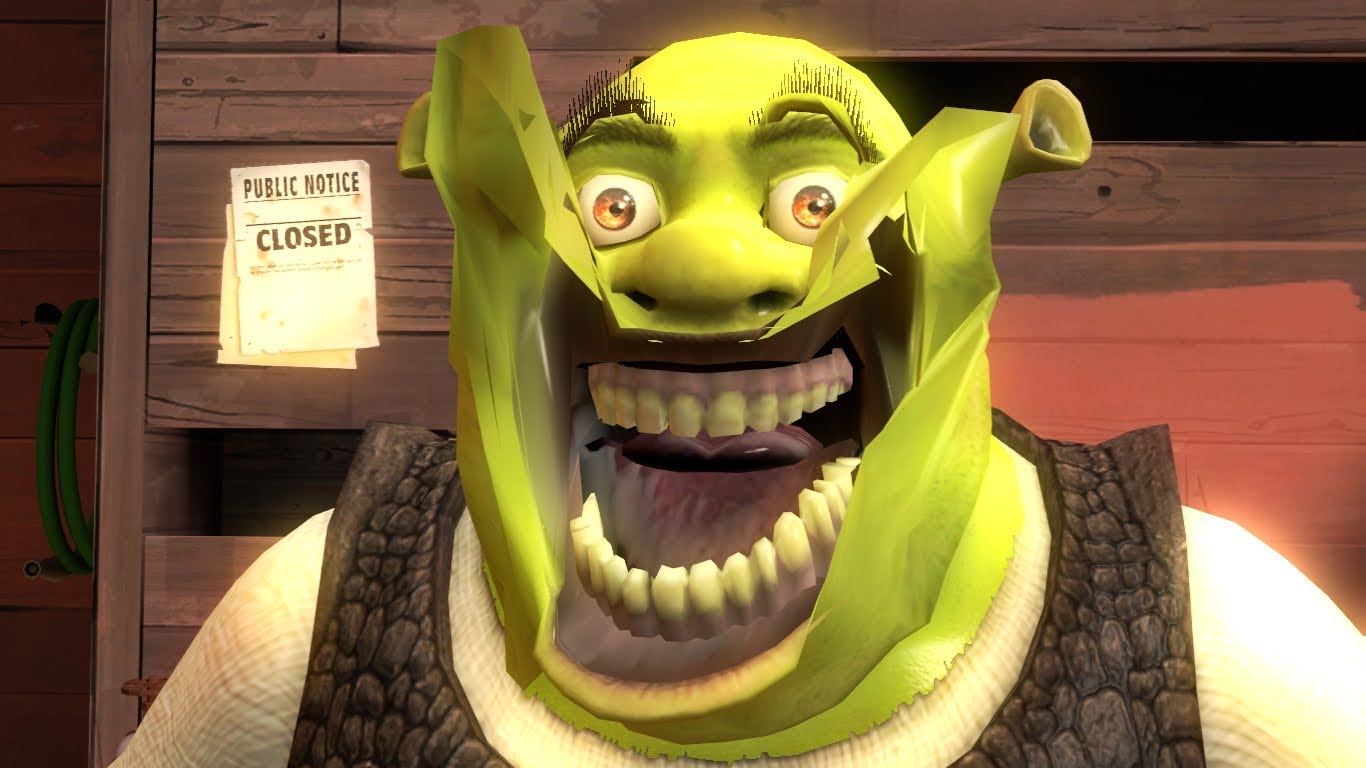 Fig. 3: A thumbnail from a version of the ‘Shrek Is Love, Shrek Is Life’ meme. The ogre’s distorted face reflects the twisting of DreamWorks’ texts by online remix culture.

Without a more thorough analysis, this conclusion seems overly neat. More research is certainly needed to support this theory, not least in the burgeoning field of meme studies. For instance, drawing on the journalistic work of Lizzie Plaugic,Pete Gofton categorizes the ‘All Star’ and Bee Movie remixes as ‘technical memes’, whose ‘appeal is derived “not from aesthetic pleasure, but a workmanlike commitment to an arbitrary premise”’,[1] such as increasing the video’s speed when a certain word is heard. Gofton also uses a musicological analysis of ‘All Star’ to attempt to explain its appeal. Yet, neither of these approaches go beyond the meme-text itself to consider its wider cultural associations. Bee Movie and ‘All-Star’, as well as other texts, like Toto’s ‘Africa’ and the sitcom Seinfeld, become popular subjects for remixing because they evoke a certain sense of nostalgic kitsch. A broader survey of meme source texts is perhaps necessary to ascertain which kinds of texts lend themselves to meme-ification, and whether a meme’s approach and tone can be linked in any way to the tone of its source. 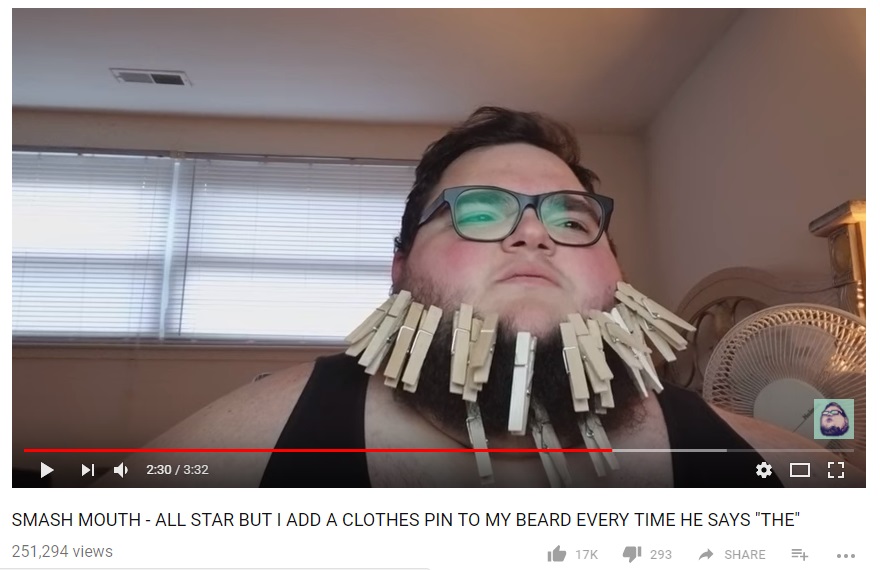 Fig. 4: An example of a ‘technical meme’ in action, as a man clips a clothes pin to his beard every time he sings the word ‘The’ in ‘All-Star’.

Paolo Brembilla comes closer to accounting for the cultural history of meme subjects in his study of Dawson’s Creek memes. He calls for an approach that recognizes ‘the complex interplay among the different cultural, social, economic, and technological factors that ultimately contribute to shaping the phenomenon in all its stages and forms’.[2] This leads him to conclude that a meme ‘gradually becomes a parody of both its original source and even the era it belongs to’,[3] which does account for the specificity of the source text in explaining the comic appeal of a meme. However, while the campy overacting captured in the ‘Crying Dawson’ meme does seem to draw its humour in part from a commentary on the excesses of its source show, the events of something like ‘Shrek is Love, Shrek is Life’ are so far removed from any aspect of the original film that it would be a stretch to call it ‘parody’.

And yet, there is something about the unique cultural standing of DreamWorks’ early CGI features – steeped in popular culture and attempts at ‘edginess’ and located at the turn of the millennium – that imbues them with a very particular form of kitsch, one which is just beginning to be articulated in this new and, at times, maddeningly opaque art form. To really understand the memes’ popularity, we must understand what these films represent to the generation raised on them, many of whom will have seen Shrek before ever seeing any of the Disney films on which its appeal is ostensibly predicated. For this reason, the next stage of my research into DreamWorks’ cultural impact will focus on the new status of its films as the subject of myriad memes, and will involve interviews with active participants in online culture with the aim of explaining what it is about this studio’s texts specifically that encourages densely ironic remediation of this kind.

Sam Summers is a PhD candidate at University of Sunderland’s Centre for Research in Media and Cultural Studies. His research focuses on the use of intertextual references in contemporary animation in general and of DreamWorks’ animation in particular, with a view to contextualizing and historicizing the studio’s role in the development of the medium.

[2] Paolo Brembilla, ‘One Does Not Simply Walk Away from the Past: The Dynamics of Memory, Spreadability and Retrobranting in the Van Der Memes Case’, in The Politics of Ephemeral Digital Media, ed. by Sara Pesce and Paolo Noto (London: Routledge, 2016), pp. 170-182 (p. 173).

4 responses to “‘Shrek Is Love, Shrek Is Life’: The Complex Nostalgia of DreamWorks Memes”