It was into this rich animated landscape of intensified rivalry that DreamWorks Animation released their nineteenth computer-animated film Rise of the Guardians (Peter Ramsey, 2012) on 21 November, just over 5 months after their previous feature, Madagascar 3: Europe’s Most Wanted (Eric Darnell, Conrad Vernon & Tom McGrath, 2012), which was distributed in June. Adapted from William Joyce’s The Guardians of Childhood book series and the feature film debut of Peter Ramsey – story artist for DreamWorks’ Shrek the Third (Chris Miller & Raman Hui, 2007) and the Christmas holiday-themed spin-off Shrek the Halls (Gary Trousdale, 2007) –, Rise of the Guardians represents something of a curious entry into DreamWorks’ animated canon. Situated within the context of the studio’s company history, the film came at a crucial moment in DreamWorks’ corporate expansion. Early in February 2012, DreamWorks had announced that it was embarking on a joint venture with several Chinese investment companies, leading to the formation of the Chinese-American film production company Oriental DreamWorks. In July, DreamWorks consolidated their expansion even further by acquiring American entertainment company Classic Media (that has since been renamed DreamWorks Classics) for $155 million in a move noted by the Hollywood trade press as allowing DreamWorks access to Classics’ pre-existing series, characters and popular branded assets (including Casper the Friendly Ghost, Where’s Waldo, Lassie, The Lone Ranger, Postman Pat and George of the Jungle).[ii]

The release of Rise of the Guardians also coincided with the exponential growth of DreamWorks’ own in-house features. Rise of the Guardians was the final DreamWorks Animation film to be distributed by Paramount Pictures, as the company had signed a lucrative five-year distribution deal with 20th Century Fox just two months before the film’s theatrical release. To mark the incoming DreamWorks/Fox partnership – which would begin with The Croods (Kirk DeMicco & Chris Sanders, 2013) – DreamWorks announced an unprecedented production pipeline of 12 animated features. In The Hollywood Reporter, Pamela McClintock heralded the company’s declaration of intent as “the most ambitious slate for an animation house in Hollywood history.”[iii] Perhaps as a consequence of DreamWorks’ sudden expansion, Rise of the Guardians achieved the lowest debut box office for a DreamWorks animated feature film. Its commercial underperformance prompted an $87 million write-down by the studio, with DreamWorks co-founder Jeffrey Katzenberg admitting that Rise of the Guardians “did not achieve the level of box-office success that we have come to expect from a DreamWorks Animation film.”[iv]

It would therefore be easy to dismiss Rise of the Guardians as nothing more than an expensive mistake, an unfortunate symptom and forgotten outcome of an American feature animation industry “at tipping point.”[v] In an article for Animation World Network titled “Rise of the Guardians – Why Did It Flop?”, Ed Hooks ultimately attributed the film’s failure in finding an audience to the sheer volume of animated features released throughout 2012 driving up blockbuster budgets. Discussing how DreamWorks prioritised “commercial potential” over narrative as the film’s “primary consideration,” Hooks predicted:

“We are poised for a new generation of feature animation studios that will begin with story and craft the budget to fit that rather than the other way around.”[vi]

Yet, for all its lapses in judgment identified in Hooks’ post-mortem on the film, Rise of the Guardians is undoubtedly a visually elaborate, beautifully designed and richly textured computer-animated film. Making effective use of the Dolby Atmos surround sound system, first premiered in Brave, and with a star voice cast that includes Chris Pine, Hugh Jackman, Isla Fisher, Jude Law and Alec Baldwin, Rise of the Guardians offers some formally ostentatious set-pieces and is replete with impressive visual effects, largely in the detailing afforded to icy protagonist Jack Frost. Jack’s ability to conjure snowflakes with his magical staff was augmented by the film’s technological developments in snow speed and fractal growth, which allowed for “precise control over the frost’s animation and behaviour.”[vii]

However, Rise of the Guardians’ most striking element is the pointed references to animation that punctuates its narrative. By bringing together the mythic heroes Santa Claus, Easter Bunny and Tooth Fairy within one collaborative narrative (they are the Guardians of Childhood who protect children’s fantasies), the DreamWorks film is an accumulation of culturally-recognisable characters. Stuart Heritage goes as far as to position Rise of the Guardians alongside other “all-star supergroup ensemble” films released in 2012 such as Avengers Assemble (Joss Whedon, 2012) and The Expendables 2 (Simon West, 2012).[viii] But what Rise of the Guardians brings together as part of its “all-star” assembly is the multivalence of animation and the precision of animated labor, with each of the film’s main protagonists offering up a specific embodiment of animated practice. Referring to the Guardians, Nicholas St. North (Santa Claus) declares: “We go by many names, and take many forms.” Indeed, we see Santa Claus fashioning three-dimensional icy carvings as part of a sumptuous model railway set (stop-motion/object animation) towards the beginning of the film (fig. 1), while the Easter Bunny oversees the meticulous painting of individual eggs (cel-animation) in his warren (fig. 2). 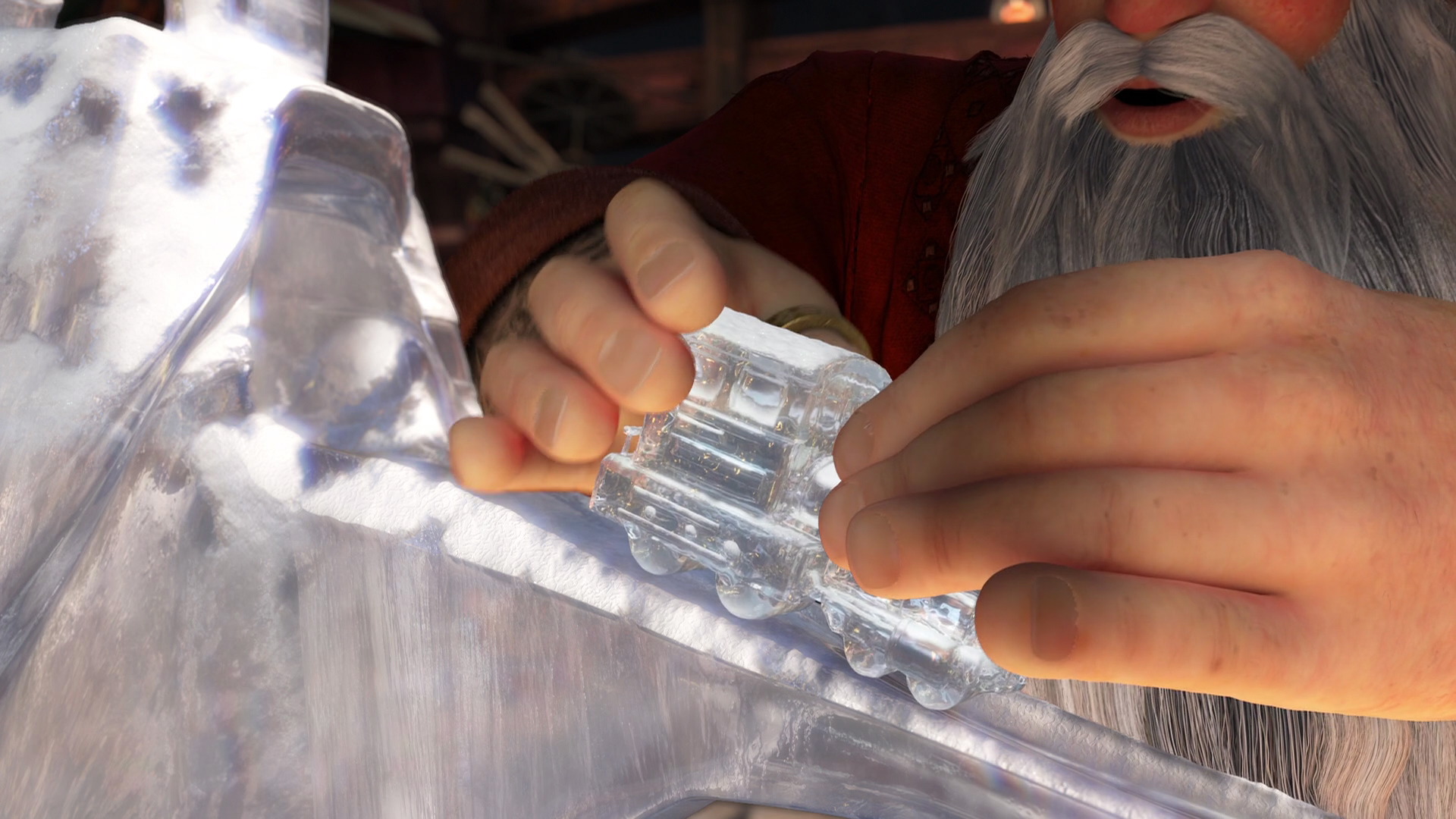 Even Jack’s conjuring abilities prefigure the kinds of ornate icy structures that would be crafted by super-animator Elsa in Frozen (Chris Buck & Jennifer Lee, 2013), a film released over a year after Rise of the Guardians. 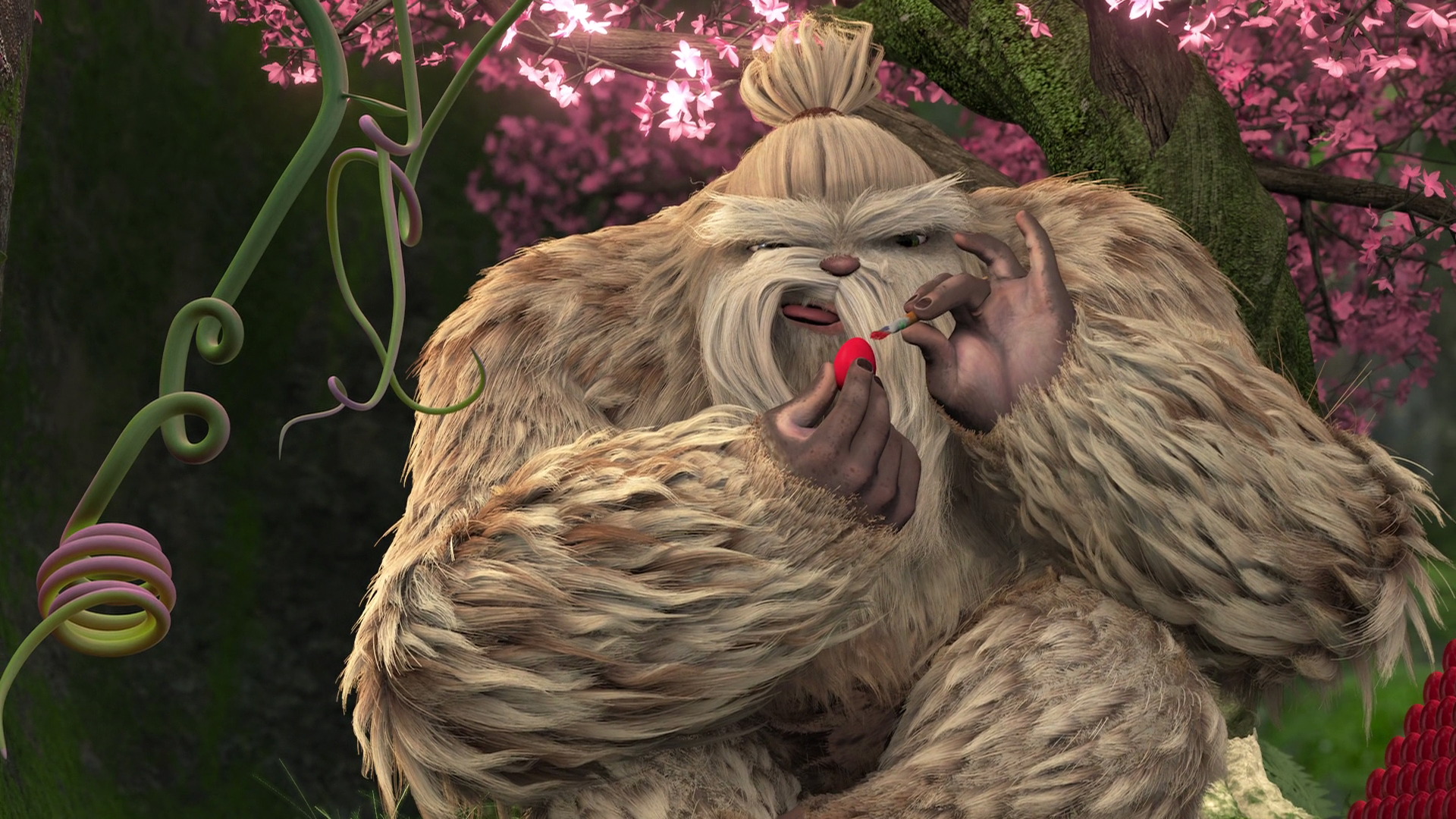 Elsewhere in DreamWorks’ film, the children’s essence of fear is personified by antagonist Pitch Black, who appears indebted to traditions of silhouette animation pioneered by Lotte Reineger in The Ornament of the Enamoured Heart (1919), and later in The Adventures of Prince Achmed (1926). Known as The Bogeyman, Pitch Black embodies the impact of shadow puppetry as he envelops his environment and swathes it in shadow, though in his colour palette is no less evocative of other graphic traditions, from grey pencil drawings to charcoal sketches (fig. 3). 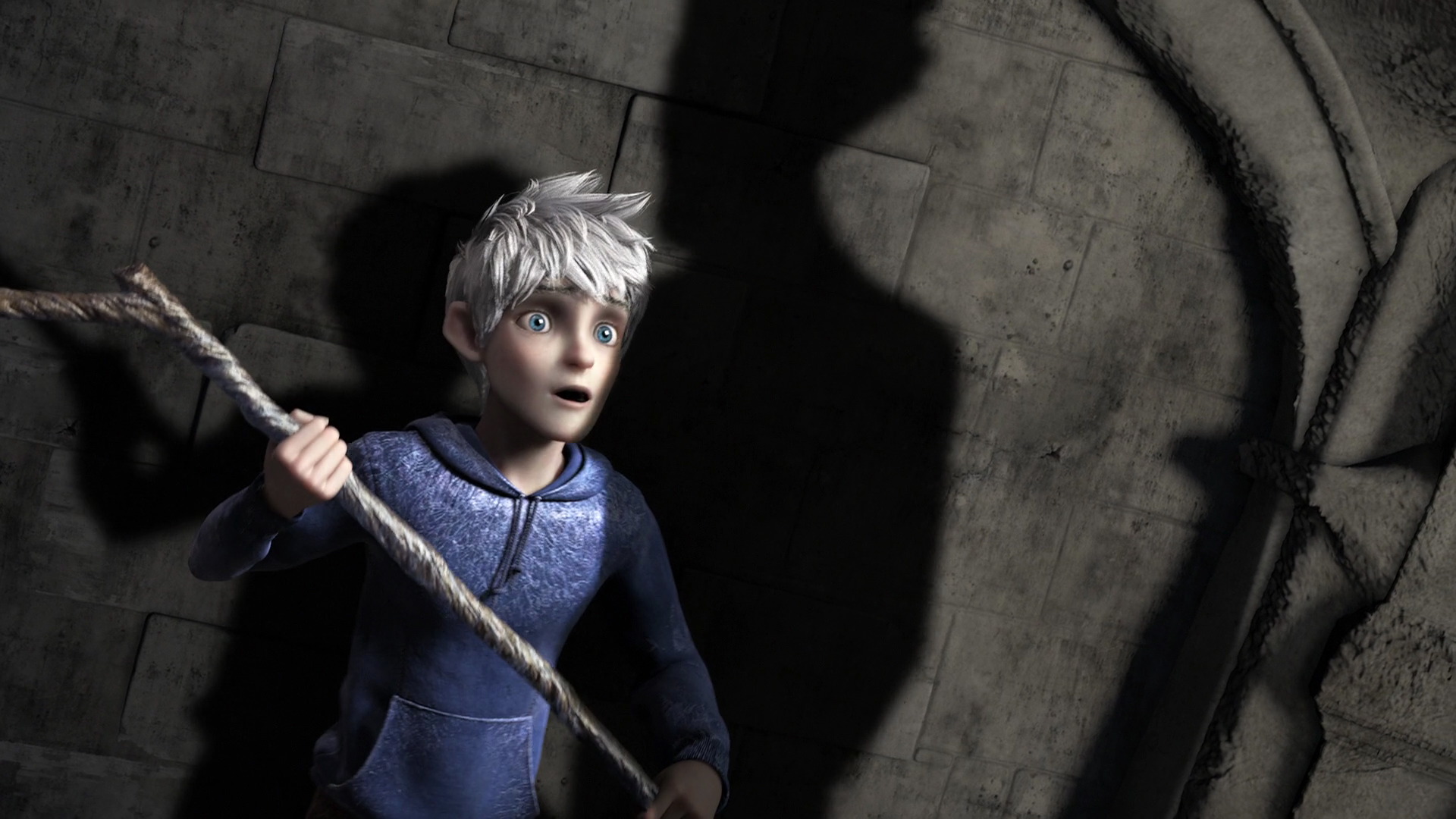 Most strikingly, however, is the character of Sandman. Comprised entirely of sand particles, Sandman communicates non-verbally using visual metaphors, symbols and figures summoned from his own molecular make-up, using pictograms as part of his physical metamorphosis (fig. 4). 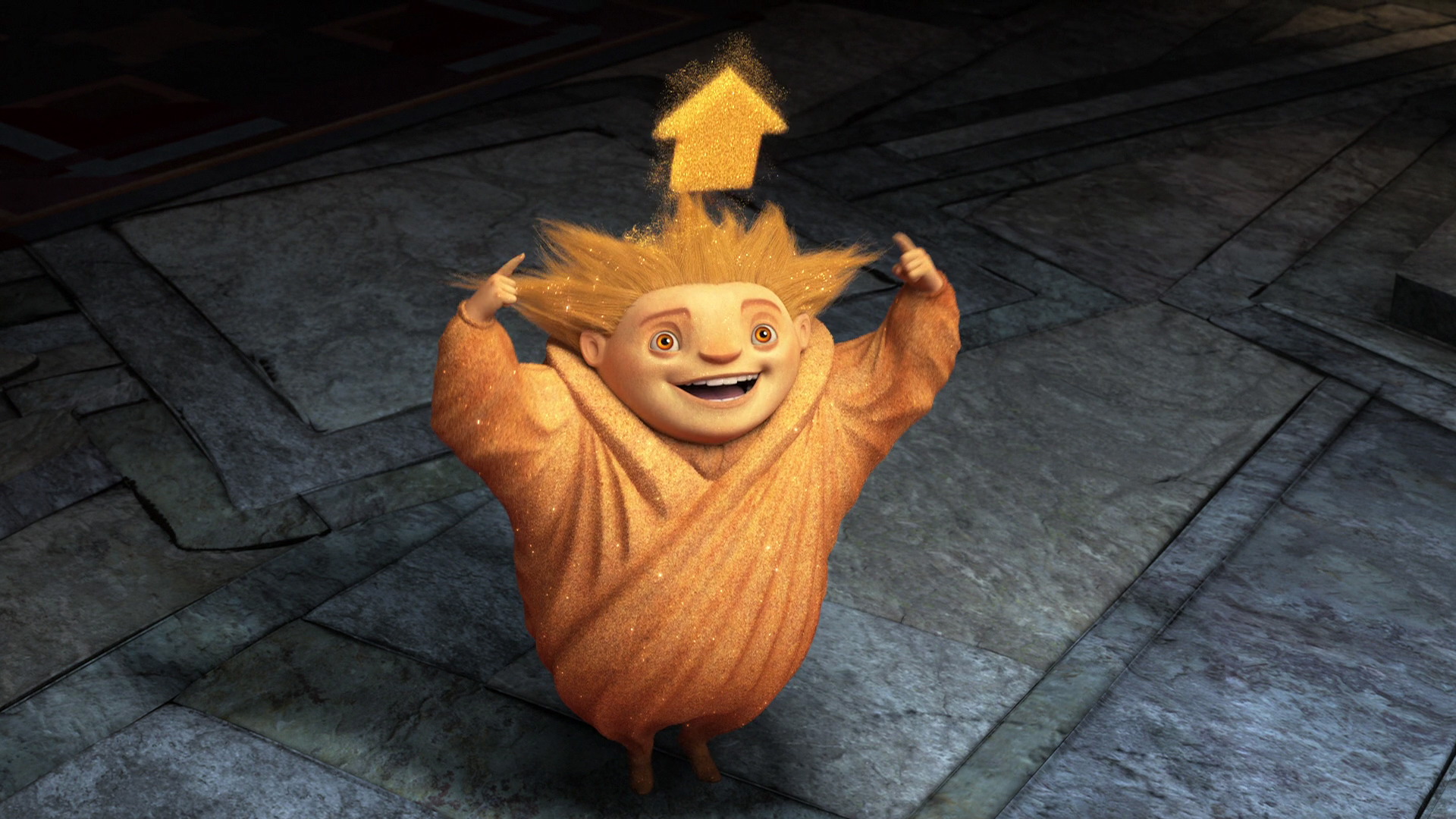 Not only does Sandman’s conjuring reprise the transformative abilities of early animated trickster characters (notably Felix the Cat) to configure his own body as a visual pun, but the character also evokes the live ‘sand performances’ of artists such as Caroline Leaf in the 1960s, and more recently Ferenc Cakó, Su Dabao and Ksenia Simonowa, who manipulate sand against an illuminated lightbox to craft their own ornate shadow stories.

In its many depictions and celebrations of animated artistry, Rise of the Guardians seems deliberate in drawing attention to the inventiveness and wonder of animated illusion. With a narrative rooted in the magic of belief and the power of imagination in caprices, it is certainly a film of resistance, matching images of childhood fantasy with a discourse on animation as a medium of creativity, movement, transformation, deception, and faith. Rise of the Guardians tells us that without the strength and nourishment of a child’s belief, the power of each Guardian (as reflections of various styles of two- and three-dimensional animation) ultimately weakens. In fact, as a character rendered entirely invisible to children due to their lack of confidence in his existence, Jack (the spirit of Winter) must join forces with the other Guardians to restore faith in them all and, in an analogue to animation, survive as a childhood fantasy. Jack himself admits: “I must’ve done something really bad to get you four together.” In preserving the imaginative and inventive flurry of animated illusion, then, Rise of the Guardians fully celebrates what happens when animation assembles.

[i] Mark Salisbury, “Tim Burton on Frankenweenie: ‘the technical aspect of animation is soul-destroying,’” The Telegraph (October 10, 2012), available at: http://www.telegraph.co.uk/culture/film/london-film-festival/9594681/Tim-Burton-on-Frankenweenie-the-technical-aspect-of-animation-is-soul-destroying.html

[v] Ed Hooks, “Rise of the Guardians – Why Did It Flop?” Animation World Network (December 6, 2012), available at: https://www.awn.com/blog/rise-guardians-why-did-it-flop.

[viii] Stuart Heritage, “Rise of the Guardians and other all-star supergroups,” The Guardian (November 29, 2012), available at: https://www.theguardian.com/film/2012/nov/29/rise-of-the-guardian-supergroups.