The stability of animation as a viable economic industry was immeasurably supported and strengthened by the Walt Disney Studios’ aspirations to innovate. The desire of Disney (the man and the company) to harness the possibilities of technology during cinema’s first two decades has certainly proven familiar academic terrain. J.P. Telotte is not alone in arguing that Walt Disney Feature Animation “fashioned a successful working – and entertaining – relationship with the technological, even pleasurably depicting such a relationship for Disney’s family audience.”[i] Nowhere was the technological dimension to Disney’s pioneering animation manifest than in their contribution to early film sound, and the rousing synchronization of sound and image (known somewhat pejoratively as ‘Mickey-mousing’) that quickly became a dual reflection of both Disney’s industriousness and the formal principles available to cel-animation. In his book on Disney feature-length cartoons, Chris Pallant makes clear that

“The industrial aspects of Disney’s sound productions […] is where Disney’s contribution to the development of sound rests – not as innovator, but as a producer whose works announced a newfound cohesion between animation and sound.”[ii]

This “cohesion” was, of course, explored throughout the Silly Symphonies series (1929–1939), coming to its fullest realization in the audio-visual arrangement of Snow White and the Seven Dwarfs (David Hand, 1937). Yet, given the importance Disney has had in the trajectory of sound/image relations in cinema, it is possible to view Snow White in light of wider critical and historical paradigms that came to bear on the emergence of film sound technology, such as the Vitaphone sound-on-disc recording system in the U.S. and the European developments in sound systems (notably in France and Germany). Indeed, Snow White is in clear conversation with the emergent role of sound in the construction of a persuasive ‘diegesis’. Also, given its formal hybridity in-between silent-era aesthetics and spoken word, Snow White is an echo of the critical ambivalence towards sound conversion expressed by filmmakers and film sound theorists through the 1920s and 1930s.

Divisive critical categories that have accounted for styles of animated sound design have tended to craft a version of the medium’s musicological rhythms predicated on either correspondence or incongruity. From Scott Curtis’ distinction between “isomorphic fidelity” and “iconic analogy” to the cartoon’s “symphonic” and “cacophonic” sound registers as coined by Philip Brophy, sound in animation fractures between a hyperreality that fortifies an organic connection between sound and image, and more heightened elements of disjuncture and discord.[iii] Animation’s aural architecture has therefore been viewed as appropriate or rebellious, a claim that often plays out between Disney’s naturalistic audio track and the anarchy of Warner Brothers’ soundscapes at the hands (and ears) of Carl Stalling and Treg Brown. However, the push-pull relationship between disparate applications of sound and sonic registers is present throughout Disney’s Snow White, and the film’s soundscape seems to occupy a compromise position between the expressive post-synch effects of silent cinema and the emergent possibilities of synchronized sound. The printed text of Snow White’s opening fairytale book, for example, functions as an informative silent film-style intertitle, and set against an instrumental refrain acts as both a foreword and a form of narration as it relays descriptive material. This opening shot is then followed by the first of the film’s magic mirror sequences (fig. 1), which obtains its impact from the allure of spoken word in its conversation between the mirror and the queen a little over ten years after The Jazz Singer (Alan Crosland, 1927). In so doing, Snow White places front and centre the technology of synchronized sound, expressing a commitment to the very ‘idea’ of sound within a cinematic context by gesturing to the attraction of speech. 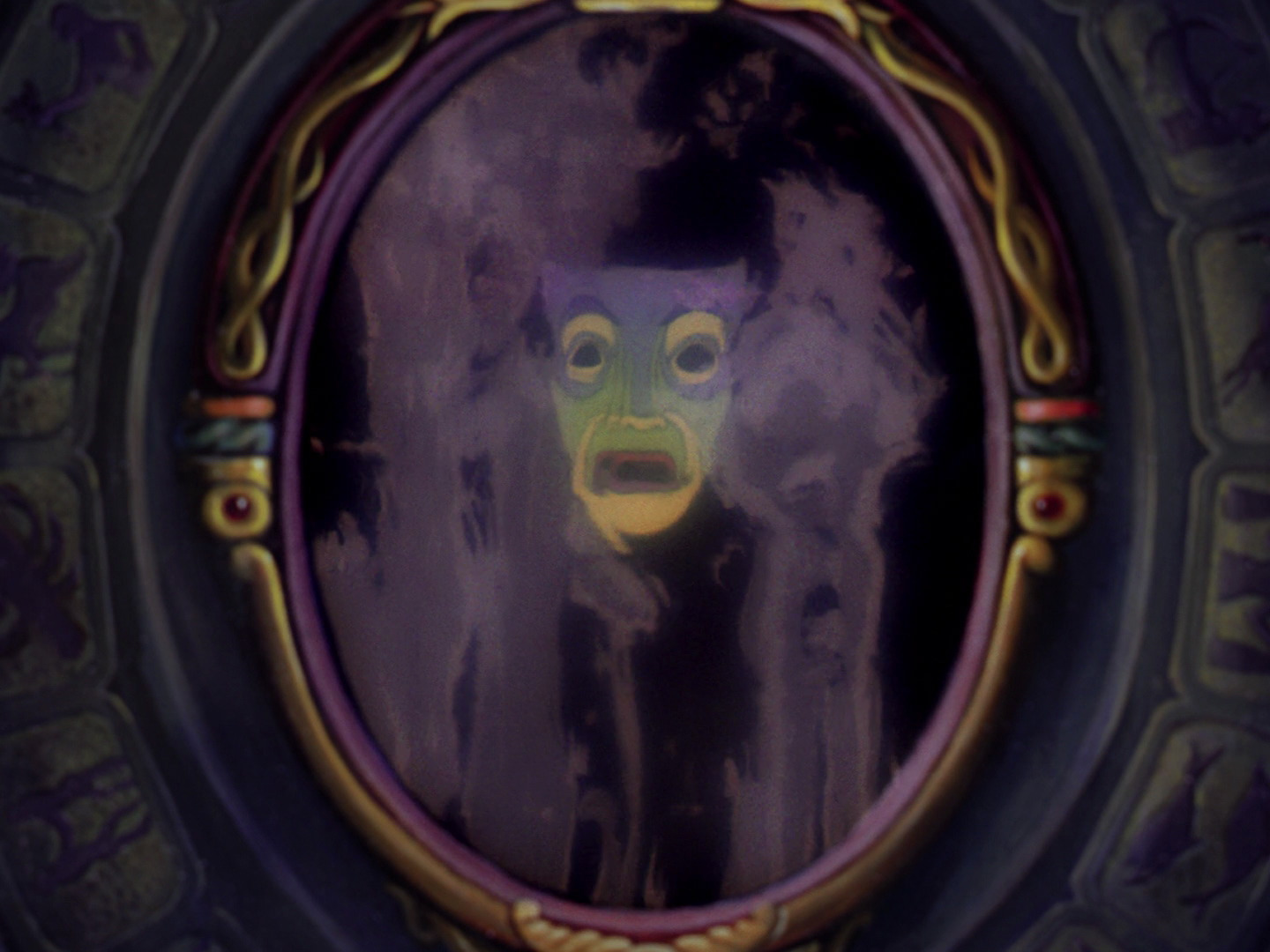 Fig. 1. The allure of synchronized sound and the spectacle of spoken word.

Sound is frequently ‘caught up’ within Snow White’s narrative too. Consider how the queen uses it as a disguise (by drinking the potion containing an ‘old hag’s cackle’), or when Doc registers the authenticity of the dwarfs’ mined diamond by tapping them for the ‘correct’ sound (knowing when one reads as ‘off’/fake). However, Snow White also shores up the possibilities of sound design as a structuring principle in service of diegesis and fictionality. Two musical numbers in the film – “I’m Wishing” and “Dig, Dig, Dig” – employ a configuration of audio elements together with the visual to achieve the deception of excessive space. Both songs involve moments predicated on the resonance of sound and the function of echoes to achieve the illusion of a three-dimensional environment surrounding the characters. Towards the beginning of the film, “I’m Wishing” creates the authenticity of vertical space as the eponymous Snow White directs her voice down into the well, listening back to the resultant echo whilst delighting in the aural repetition as it creates momentary accompaniment for the lonely princess (fig. 2). 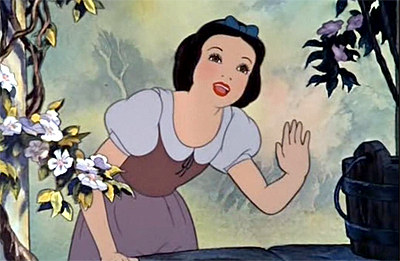 In “Dig, Dig, Dig,” echoing lyrics again serves to consolidate the vastness of the animated milieu, in this instance the dwarfs’ mine. As they carefully source diamonds, the dwarfs chant and sing, again listening back to the sonic resonances as part of their laborious routine (fig. 3). Therefore, Snow White’s convincing creation of imposing three-dimensional space – notably shown during Snow White’s woodland fall – has as much to do with its considered use of sound as it does from the visual impression of depth afforded by the pioneering multi-plane camera (first in The Old Mill [Wilfred Jackson, 1937]). The film’s spatial imperative situates sound within distinctions of the visible and that which lies offscreen, with the soundtrack doing the job of animation by creating the illusion of life outside of the spectators’ field of vision. 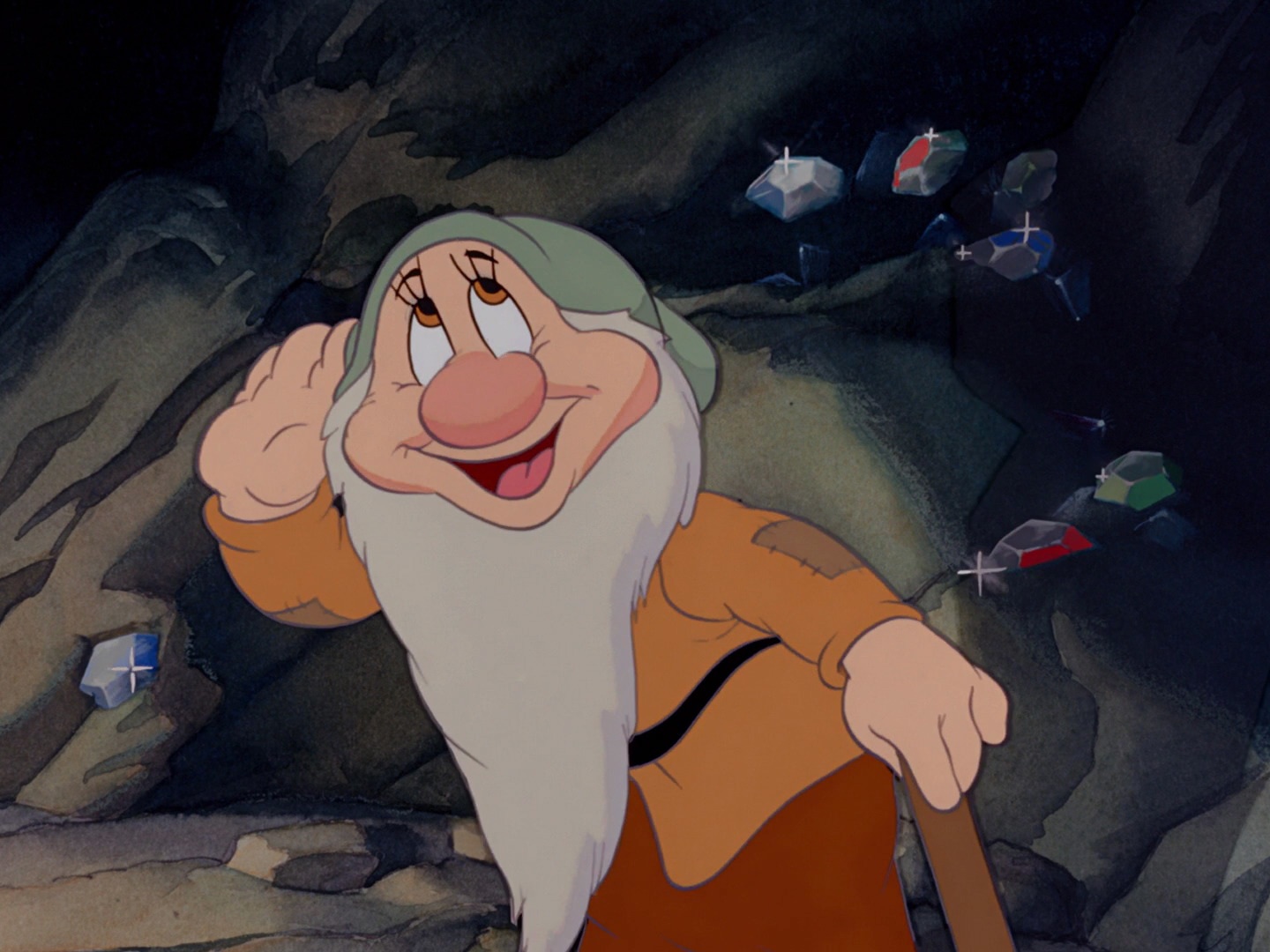 Fig. 3. The dwarfs listen back to their voices in the cavernous diamond mine.

Yet, Snow White’s innovative and highly self-conscious soundscape positions the film within dominant critical paradigms right at the heart of some of the debates – as well as the vocabulary – circulating around the ambivalent application and arrival of sound into cinema in the 1930s. Many theorists feared the coming of synchronization, a moment in which cinema would sacrifice artistry as due to restrictive synch technology, be driven back to the theatre. French filmmaker and film sound theorist René Clair lamented that the medium “has conquered the world of voices, but it has lost the world of dreams.”[iv] In its ambivalence, then, Disney’s feature-length animated film similarly spoke to the chaos of emergent sound technology (and the early period of trial and error), before cinema would become gripped by the fetishization of sound/image synchronization. Caught between the new world of “voices” (and magic mirrors) and “dreams,” Snow White matched new synchronized speech effects with more expressive, analogous sounds that fully exploited animation’s fundamental silence (such as the scene when the dwarfs return home and encounter a sleeping Snow White).

The ‘compromise’ category of the “silent sound film” advocated by Noël Carroll is useful to Snow White here, despite originally used to disclose the historical working through of synchronized sound in the early-1930s across a variety of national cinemas. Discussing the aesthetic significance of sound and the structural implications of this new technology, Carroll argues:

“The transition from silent film to sound not only involved a question about how sound would be used. It also prompted a reevaluation of the nature of the medium. […] Sound caused a major theoretical crisis in the film world.”[v]

Films such as Blackmail (Alfred Hitchcock, 1929), Â Nous la liberté (René Clair, 1931), M (Fritz Lang, 1931), Das Testament der Dr Mabuse (Fritz Lang, 1932), and Vampyr (Carl Dreyer, 1932) were all steeped in the methods of silent cinema. Yet, influenced by European avant-gardes, they were equally invested in the asynchronous mobility of the camera to explore the visual possibilities for post-synch sound. In its fluctuating treatment of sound, Snow White appears very much a “silent sound film,” shifting between direct-recorded sound, and a “reconstituted” rejection of sonic fidelity more in line with post-synch silent film technology (leading to what Clair called an “interpretation of noises”).[vi] Like so many “silent sound” films of this period, then, Snow White can be seen as a lively film of contending forces. As an experiment with the possible uses of synchronized sound and falling back on asynchronous sound-montage, Disney’s film exemplifies one of a number of speculative responses to developments in sound technology, which for many audience and filmmakers alike would either augment or impair the aesthetic achievements of early cinema.

[i] J.P. Telotte, The Mouse Machine: Disney and Technology (Urbana and Chicago: University of Illinois Press, 2008), 22.