I’ve been producing animation for over 30 years in both the commercial and the broadcast realms. I’ve consciously stayed away from the long-form motion picture world because I like working with shorter length projects, and also because I prefer exploring a variety of styles and techniques. The other “mission” I’ve chosen to undertake is to try and produce work that will change and challenge people’s perception and expectations of what animation should, and can be.

When I entered the industry in 1980, animation was “cartoon” in nature – “ducks & bunnies” almost exclusively geared for children. Fortunately, MTV was beginning to experiment with hiring multiple sources to create and produce: 10 station ID’s. The baby-boomers were now network executives and in a position to begin commissioning work using animation – something they grew up watching, understood quite well and had great feelings of nostalgia about. I watched this take place while cutting my chops at most of the New York studios that still thrived in the early/mid 1980s.

For the most part, the animation industry back then was split into an East and a West Coast faction. East handled mostly TV commercials and shorter form productions, while the West handled long form motion picture cartoons and television series. It had been that way since the 1960s. Animated interstitial segments within live action programming seemed to be reserved for educational/children’s shows like Gene Deitch’s Tom Terrific or CBS’ Captain Kangaroo, and the wonderful independently produced animated vignettes on PBS shows like Sesame Street, The Electric Company and 321 Contact.

To my memory, only two prime time programs utilized animation as an integral part of their structure. Between 1969 and 1970 NBC aired one season of My World And Welcome To It, and in 1984 the same network ran The Duck Factory – also for just one season. Both these programs profiled the life of cartoonists and used animated vignettes to present brief visual descriptions directly related to the overall 22 minute storyline. They were not standalone interstitials.

ABC Network also tried airing an animated pilot as one of the episodes within their popular Love American Style live action program in 1971. It was an All In The Family-inspired adult cartoon produced by Hanna-Barbera Productions and, although ABC didn’t pick it up, it did go into syndicated airing on the NBC network between 1972 and 1974. But this show was ultimately an all animation series, not interstitial. Animation and cartoons had not yet garnered enough respect or status to allow for network television executives to consider it a viable element for an adult prime time audience. It was still strongly rooted in children’s programming as far as the network executives were concerned.

This all began to change in the mid/late 1980s, influenced by the growth and impact of the narrowcast cable industry. MTV, HBO, The Comedy Channel, and so on, all started to reach out to the cartoon studios for short animated accents that could pepper their marketing efforts. In the case of MTV, the musicians and record labels that produced the music videos were employing the same strategy. By the second half of the 1980s short animated vignettes were starting to be produced for what would have been exclusively live action programming. Fox started airing two continuing series of short animated pieces within the Tracey Ullman Show in 1987. One set was titled Dr, N! Godatu and was created by National Lampoon cartoonist M.K. Brown. The other group of shorts concerned a family called The Simpsons created by Matt Groening. Both were animated by the Klasky-Csupo Studio. Groening’s Simpsons went on to be one of television’s most popular sitcoms and continues to this very day.

My first hand contact with this kind of production was while working as an Executive Producer at R.O. Blechman’s NY studio, The Ink Tank. The newspaper USA Today had recently expanded into cable with USA Today – The Television Show and they commissioned us to produce two short animated pieces and several 10 minutes bumpers for their News/Entertainment Division that needed to be humorous and address current themes in the news. We cast the voices from friends like Paul Dooley, Lynne Lipton, Alice Playton, Anthony Holland and Mike Mearian, all with Second City experience. We also brought in a young (and now quite famous) Gary Baseman as production designer. A short example of the animations we created was Salesman. 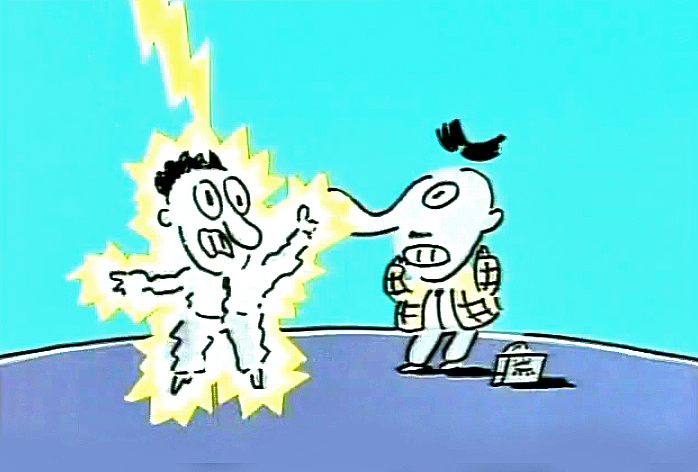 A shot from Salesman, a short aired within the 1988-1990 USA Today – The Television Show news magazine.

There were no rules in terms of this sort of televised segment, and I actually remember wondering why, other than in the Tracey Ullman Show on Fox, this hadn’t been done much before, and what I could look forward to in the future when it came to this sort of interstitial production within live action programming.

Turns out the fermentation process needed time and I would have to wait another 6 years before seeing something equivalent bubble to the surface of the production cauldron. My wife Patrice and I had started our own studio in 1990 and immediately began creating and producing animation for advertising agencies and their clients, but although we worked with MTV to launch the first season of Beavis and Butthead in 1992-93, and the network had begun producing original animated programming themselves in 1993, the interspersing of cartoon vignettes within a live action series was not the norm. My feeling is that the popularity of The Simpsons and Beavis and Butthead had reached such a point by 1996 that network programming could finally grasp that an adult audience (albeit it on the young side) could easily digest cartoons as a viable means of entertainment, and if it used parody and irreverence, more the better….