Soon after the release of the 53-second teaser trailer for Pixar Animation Studios’ forthcoming Incredibles 2 (Brad Bird, 2018) – that premiered on November 18, 2017 and attracted 113 million views in its first 24 hours (becoming the most viewed animated film trailer) –, several follow-up trailers emerged that connected the studio’s twentieth feature film to the 2018 Winter Olympics held in Pyeongchang. While the first ‘sneak peek’ for Incredibles 2 would subsequently appear on U.S. television screens on February 14 during NBC’s Olympic Games coverage, a series of tie-in TV spots also showed the superheroic Parr family engaged in a range of exhilarating winter sports. The first of these Olympic-themed adverts comprised original animation footage produced specifically for the commercials, and showed the hyperactive Dash Parr speed skating around the rink at a typically electric pace (fig. 1). The voiceover in this 30-second advertisement proclaimed that, while the characters would finally return in theaters in the summer (14 years after the original film), “this winter” the Parr family would otherwise be enjoying the action and excitement of the 102-event, multi-sport Winter Olympic games. 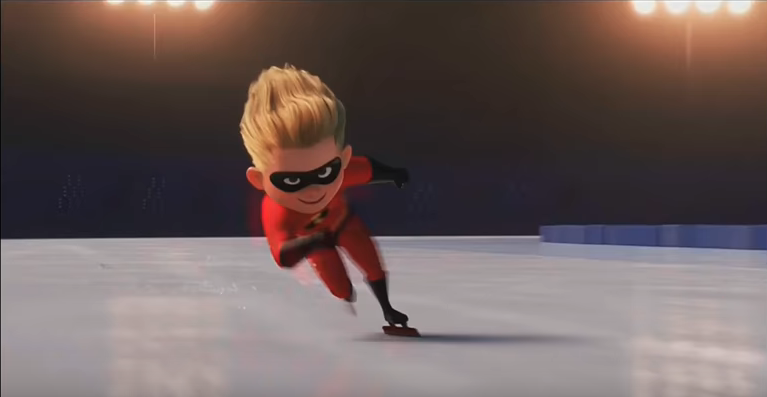 Other TV spots in the Incredibles 2 2018 Olympics series included the whole Parr family racing down a snow-covered course, and using their specific superpower to accelerate downhill towards their ‘incredible’ finish (fig. 2). 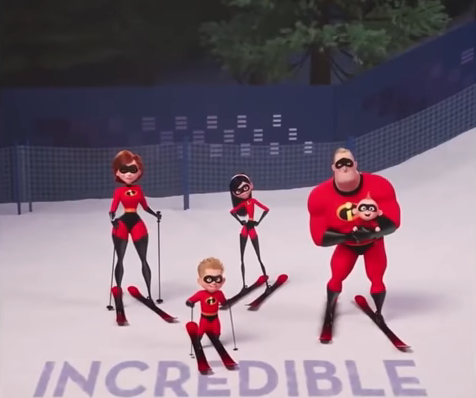 Yet, most of these paratexts focused on the tribulations of individual characters, functioning as character-centered vignettes in the performance traditions of classical-era shorts that have been understood via Steve Seidman’s discourse of “comedian comedy.”[1] In one of these Incredibles 2 promotional shorts, for example, Bob (Mr Incredible) and Helen (Elastigirl) are shown figure skating, fully exploiting the latter’s flexibility to orchestrate complex maneuvers. In another one, the eldest Parr child, Violet, conjures energy forcefields as she snowboards down an ice track, while a third shows Lucius Best (a.k.a. Frozone) casting ice paths as he glides over his frozen structures suspended in mid-air. A final short depicts the newest addition to the Parr family, Jack Jack, who uses his laser eyesight to splinter in half a curling stone that spins into the frame (fig. 3). 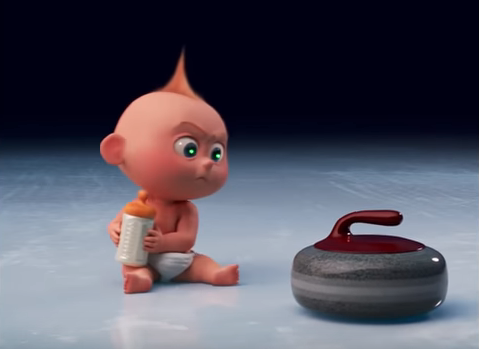 It is, of course, common practice for the major Hollywood animation studios to explore ancillary income streams, with many characters highly conducive to sustained marketing and innovative merchandising practices. It is therefore not hard to find scholarly references to “the marketing strategies for these Pixar products and the tied-in merchandizing industry.”[2] Examples of the studio’s range of tie-ins include Violet and Dash Parr visiting restaurant McDonalds as part of the promotion for the first The Incredibles (Brad Bird, 2004); the TV spot for Cars (John Lasseter, 2006) promoting AT&T Broadband; the Toy Story 3 (Lee Unkrich, 2010) commercials for Visa Debit, U.S. Postal Service and Peugeot 5008; and the tie-in between Monsters University (Dan Scanlon, 2013) and daily sports news television program SportsCenter. As the Olympics/Incredibles 2 collaboration illustrates, Pixar have also historically tapped into the audiences for high-profile sports events. The studio produced Superbowl TV spots as part of their promotion for Wall-E (Andrew Stanton, 2008) – which again contained original animated footage – and ads for both Up (Pete Docter, 2009) and Inside Out (Pete Docter, 2015), thereby acquiring a lucrative broadcast slot that today can cost upwards of $4 million for 30 seconds of screen time. Robert Marich explains: “High-profile events boost the price on thirty-second commercials. The Super Bowl is the most expensive.”[3] He claims that NBC also “reportedly sold prime-time thirty-second commercials for the 2008 summer Olympics at an average of $800,000.”[4]

Sports and sports events certainly seem a profitable avenue through which to market computer-animated films, if not a useful outlet to express the energy and agility of animated characters more broadly. The Incredibles 2 paratexts, for example, are not only themed to align with the global sports calendar, but they equally trade in the momentum of the Parr family’s excessive and hyperbolic movement by exploiting winter sports as way of articulating issues of (super)performance. Paul Wells recently noted that “both sport and animation are material processes, whereby the attainment of their outcomes makes the very practice by which they have been achieved ultimately invisible.”[5] In the case of Disney/Pixar’s Incredibles 2 sports-themed promotional campaign, the “leakage” of technology onto the screen interface, to use Aylish Wood’s term, is made visible through the exertions of the superheroic body in motion.[6] The film’s poster campaign had initially stressed the domesticity of superheroism by playing on the tension between national security and household chores (fig. 4). However, the sporting lives of the Parr family in these Olympic spots, where they flex, strain and perform to the highest standards, exaggerates their heroic activity though the incredible possibilities of digitally-animated aesthetics.

Beyond Pixar, the promotion for other recent computer-animated films has also themed their paratextual content by turning once again to the topicality of sports events in order to re-situate popular animated characters within new performative contexts. Debuting, like Incredibles 2, in February 2018 during the Winter Olympics (and a month before its full extended trailer), the teaser for Illumination Entertainment’s The Grinch (Yarrow Cheney & Scott Mosier, 2018) also leans heavily on the visual spectacle of Olympic sport. Accompanied by the slogan “Everyone can Dream,” the 45-second preview opens on the eponymous Grinch and his dog Max watching television coverage of the Winter Olympics. Inspired by the agility of American figure skater Adam Rippon, the furry green miser drifts off into his imagination and envisions his own performance pulling off tricks, twists and turns on the rink to the tune of Christina Aguilera’s 2002 song “Beautiful” (fig. 5). 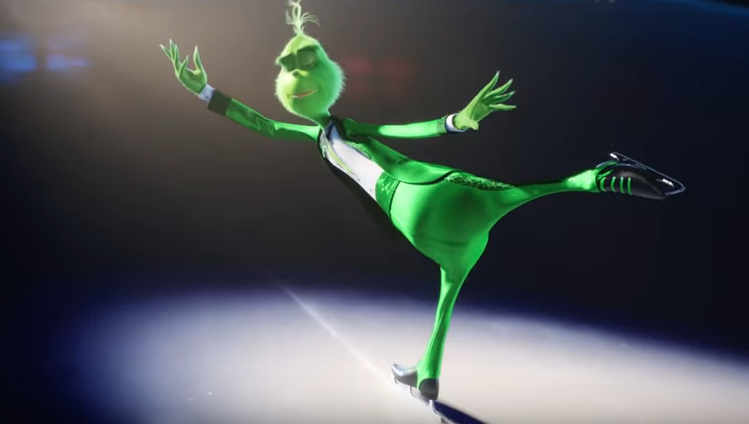 But there are other examples. During NBC’s earlier television coverage for the 2016 Olympic Games held in Rio de Janeiro, Disney aired a new TV spot for its computer-animated feature Moana (Ron Clements & John Musker, 2016) depicting protagonist Moana, daughter of Motunui’s chief Tui, running towards the screen before vaulting over the ‘camera’ and out of sight.

Often featuring original computer-animated footage not present in the final movie, the paratextual material of computer-animated films remains an increasingly interesting object of study. Indeed, such paratexts must now regularly function as important connectives to enforce the link between a feature film and its sequel(s). However, they also invite a critical discussion of the many ways that teasers, trailers and TV spots can be carefully orchestrated as promotional thresholds framing the film’s theatrical exhibition, in this case through their intersection with topical and current sports events.[7] Among the sumptuous pleasures and anticipations of teaser/trailer campaigns, the promotional material for Incredibles 2 therefore illustrates how sports ‘themed’ paratexts are evolving into a common strategy within computer-animated film marketing.

Dr Christopher Holliday teaches Film Studies and Liberal Arts at King’s College London specializing in film genre, international film history and contemporary digital media. He has published several book chapters and articles on digital technology and computer animation, including work in Animation Practice, Process & Production and Animation: an interdisciplinary journal. He is the author of The Computer-Animated Film: Industry, Style and Genre (Edinburgh University Press, 2018), and co-editor of Fantasy/Animation: Connections Between Media, Mediums and Genres (Routledge, 2018).

2 responses to “Parrs and Paratexts: The ‘Themed’ Promotion of Incredibles 2 (2018)”