Animation is the medium that allows for a dramatization of a skirmish with nature.

In Segundo de Chomón’s Création de la Serpentine (1908), a sorcerer transforms a billowing piece of fabric into a woman who performs a brief serpentine dance before being joined by other dancers, all manipulating large veils of silk. Together, the dancers create a dizzying, airy spectacle of animated fabric that conjures images of flowers and clouds before morphing, through a dissolve, into flames (fig. 1).

The spectacle appears in other films attributed to Chomón and reflects a general theme of “metamorphosis” that runs through his work. The serpentine dance sequences contain none of the stop-motion effects used in films like El Hotel Eléctrico (1908) and Le théâtre électrique de Bob (1909) that link Chomón directly to the early history of animation. Nonetheless, the sequences are fascinating because, whereas Chomón’s stop-motion animations clearly invite audiences to contemplate animation as a realm of magic and fantasy, his frequent displays of metamorphosis link animation intriguingly to “nature.” 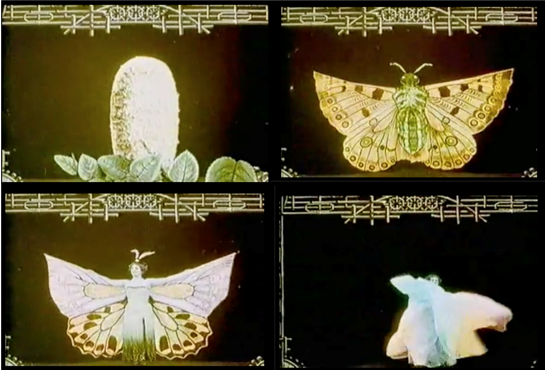 Fig. 2. The metamorphosis of a caterpillar into a serpentine dancer in Les Papillons Japonais (1908). From https://archive.org/details/youtube-odtGewCwBdg

Consider that many of Chomón’s films resemble natural history films popularizing the scientific study of plants, animals, and insects. The transformation of a caterpillar into a butterfly and then a serpentine dancer in Les Papillons Japonais (1908) is clearly operating with this in mind (fig. 2). And the frequent references to plants, from the botanical forms reflected in the serpentine dancer’s billowing fabric to prop flowers transforming into female dancers, as in Les fleurs animées (1906), call to mind the popular image of flowers blooming in early time-lapse films, from Oskar Messter’s Blumen-Arrangment (1898) to Percy Smith’s From Bud to Blossom (1910). The resemblances stem from an important overlap between early trick and popular science films. At least in Europe and the United States, at the turn of the century, the use of time-lapse photography to reveal the movements of plants, for example, was promoted and received as a wondrous special effect that brought nature to life, frame by frame, as in a stop-motion animated film. Although they circulated primarily in the didactic form of popular science, such spectacular metamorphoses overlapped with the trick film genre because they highlighted how the motion picture camera could make nature unnatural: flowers blooming appeared to dance with a magical life of their own.[i] What’s more, the whole enterprise seems to crystalize in the live-action realm what Esther Leslie claims about cartoon animation: “In animated nature, technology and magic are one.”[ii]

With this in mind, lately I have been imagining something like a “natural history of animation” that reveals meaningful connections, for example, between Chomón’s invocations of botany, entomology, and the serpentine dance, the early popular science filmmaker Percy Smith’s lesser-known uses of stop-motion techniques—e.g., in To Demonstrate How Spiders Fly (1909)—and the influences of natural history on Winsor McCay’s How a Mosquito Operates (1912), not to mention the appearance of a flower blooming in Little Nemo (1911) (fig. 3). Such a history might also cast Eisenstein’s meditations on Disney’s The Moth and the Flame (1938) in the light of a film like Chomón’s Métamorphoses (1912), which uses a magical science demonstration to display stop-motion animated puppets that undergo mesmerizing transformations after being set on fire.[iii]

Fig. 3. The magical growth of a rose in Little Nemo. From: https://archive.org/details/LittleNemo.

I see these connections as opportunities to think in new ways about historicizing and theorizing early animation. In animation studies, metamorphosis tends to be linked to the wondrous (im)possibilities of animated forms that are, by nature, not bound to the natural world but rather exploit longstanding affinities with fantasy, dream, and magic. Without questioning the importance of these affinities, I wonder what natural history can teach us about the origins of animation in what Tom Gunning calls “a fantasy of metamorphosis or the potential for transformation.”[iv] Chomón seems to point to this in the way that the serpentine dance in Création embodies those qualities of the protean and the plasmatic that are so important to understanding the nature of animation and, I suggest, animation’s relationship with nature.

Colin Williamson is an assistant professor of Film and Screen Studies at Pace University (NYC). He is the author of Hidden in Plain Sight: An Archaeology of Magic and the Cinema (2015), and has published in such edited collections and journals as Thinking in the Dark: Cinema, Theory, Practice (2016), Leonardo, The Moving Image, and animation: an interdisciplinary journal (ANM). Colin is currently a reviews editor at ANM and serves on the Executive Committee of Domitor, the International Society for the Study of Early Cinema. His research has been supported by fellowships from the University of Pennsylvania, the American Academy of Arts and Sciences, Harvard University, and Rutgers University. Colin received his Ph.D. in Cinema and Media Studies from the University of Chicago.

[i] I have written about this dimension of time lapse in my book, Hidden in Plain Sight: An Archaeology of Magic and the Cinema (New Brunswick: Rutgers University Press, 2015).

3 responses to “Meditations on Metamorphosis: Natural History and Animation in Chomón’s Trick Films”