The Computer-Animated Film is ambitious in its scope and comprehensive in its coverage, which alone would make a go-to text in the still-comparatively underserved field of contemporary animation. On top of this, its intelligent critique and potentially controversial genre-based approach make it an engaging read for experienced animation scholars.

Holliday begins by concisely laying out the history and contemporary landscape of the computer-animation industry in his introduction, a useful resource in itself, all the while working towards his eventual statement of intent. The book approaches the computer-animated film as a genre, which Holliday explains will allow him to “develop new terms of critical evaluation for a popular and rapidly accelerating cinematic form, one whose style, form and function has not yet been addressed with such breadth and scope in existing academic discourse”(23). The benefits of this methodology are immediately clear. Indeed, considering these films together as belonging to the same generic framework can, and certainly does, reveal a wealth of aesthetic and narrative through lines which can, in turn, be considered in terms of the specificities of the medium. However, there has long been a certain taboo around animation-as-genre and the limits it implicitly places on the medium, one which Holliday, to his credit, acknowledges almost immediately. He cheekily opens his first chapter with the following quote from Brad Bird: “the next time I hear, ‘What’s it like working in the animation genre?’ I’m going to punch that person!”. Clearly fancying himself in a physical confrontation with the Incredibles director, Holliday is steadfast, advocating the value of the generic approach. He recognizes and thoroughly grapples with the issues arising from his stance, and broadly convinces, correctly noting that “the US animation industry and its practitioners have shaped computer-animated films to exhibit a further degree of formal specificity”(35). He also speaks to the importance of “viewing computer-animated films as connected through their own internal structures and attributes, rather than simply governed by the rule-based familiarity of live-action genres”(33), a rationale sensitive to and respectful of the medium’s unique properties, which might even win over Bird.

For this reader, though, Holliday’s arguments for the legitimacy of his generic approach, while fascinating, are secondary to the results of its application. In identifying, analyzing and explaining the genre’s common properties, The Computer-Animated Film ends up providing detailed coverage of many of the recurring elements which can be readily identified in the Hollywood CG feature tradition, such as the journey narrative and a proclivity for anthropomorphism. Holliday also draws attention to tropes that could easily have gone overlooked. One might begin, for instance, the chapter on the “Spectacle of Scrap” thinking “no, surely there can’t be that many computer-animated films dealing directly with piles of trash”, only to be greeted with a raft of examples from the obvious (WALL-E, 2008) to the I-should-have-thought-of-that (Rango, 2011) to the I’ve-never-heard-of-that (Yak: The Giant King, 2012). Smart connections between form and content are drawn throughout, with the look at how CG’s dynamic “camera” movements facilitate the anthropomorphic point-of-view being one of several highlights. Holliday is entertaining in both his writing and in his choice of examples, wittily illustrating the medium’s qualities and the genre’s tropes with apt extracts. A chapter on computer-animation’s functional resemblance to puppetry refers to the likes of Gru’s puppet-assisted bedtime story in Despicable Me (2010) and the improvised rod-puppets used to distract the monsters of The Croods (2013), for example. It is this string of thoughtful, comprehensive analyses, arising from the genre-based approach, which comprises the bulk of the book, and which is likely its most important contribution to the field, providing much for animation scholars to discuss and draw upon. 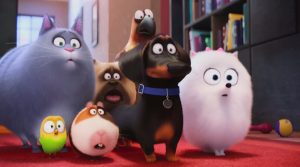 A shot from The Secret Life of Pets.

There is still something that does not sit quite right about placing the likes of Beowulf (2007) and Final Fantasy: The Spirits Within (2001) in the same genre as, say, The Secret Life of Pets (2016), but perhaps this is simply an instinct that should be overridden. It can certainly be argued that Holliday would have been prudent to put some restrictions on his conception of the computer-animated film genre, that perhaps an “American”, “Mainstream”, “Children’s” or “Commercial” prefix might have made his argument for its existence more airtight. Crucially, though, this would have limited the book’s astonishing scope. A huge array of texts is considered here, reaching across the globe and into the depths of obscurity, and Holliday cross-references each of them in multiple intriguing areas. The book is focused on highlighting and investigating their many similarities, rather than their often readily-apparent differences, because this is the more useful route of inquiry. It avoids any claims that all computer-animated films exhibit a given trait. Indeed, although the author argues against “invoking digital technology as the sole basis of the computer-animated film’s genre identity” (34), I would have to contend that the only thing that every single text in this genre has in common is their mode of production, the simple fact that they are computer-animated. And yet, as Holliday ably demonstrates, that is more than enough to draw illuminating and convincing conclusions about both the films and the medium using a genre-based framework. Inevitably, some will be less convinced than others of the legitimacy of the computer-animated film as a genre, but Holliday’s defense is strong, and as a tool for studying this ever-expanding canon of work he has shown it to be indispensable.

Sam Summers is a researcher at the Centre for Research in Media and Cultural Studies at the University of Sunderland, UK. His research focuses on the use of intertextual devices in contemporary animation, and the output of DreamWorks Animation in particular, with a view to contextualizing and historicizing the studio’s role in the development of the medium. He is the co-editor of Toy Story: How Pixar Reinvented the Animated Feature (Bloomsbury, 2018) and author of the up-coming DreamWorks Animation.

One response to “Computer Worlds”