For theorists of decoloniality, and of the “ontological turn” in anthropology, the concept of a “world of many worlds” has urgent political stakes. Walter Mignolo has long proposed the concept of the pluriverse as a way to think beyond the discourses and narratives of Western universality. In the introduction to their edited volume, A World of Many Worlds (forthcoming from Duke UP next month), Marisol de la Cadena and Mario Blaser propose “the pluriverse” as a model through which we might embrace the many ontological worlds of indigenous peoples, and the worlds and forces of nonhumans—in a manner which might allow us to together address and allay the catastrophic destructions of the Anthropocene. For both, the touchstone is the following statement:

Alain Badiou states the question that is fundamental to film philosophy from Stanley Cavell and Gilles Deleuze to Giorgio Agamben and Jacques Ranciere, among many others: “What does cinema think that only it can think?” This at once indexes the problematic of cinema’s medium specificity and a set of historico-political questions about the world that revolve around truth, the real, and representation—even where they dislocate these concepts. The questions are necessarily historical because so are media, in a historical-political-technical sense and, to use Jonathan Sterne’s beautiful framing, as infrastructures for being. I want to re-pose the question here as “What does animation think that only it can think?” though my answers do not turn out to suit the structure of a question that calls for a singular, universal response.

Cinema’s ontology and specificity—as well as its ethical vocation—are often linked through “the world,” a concept that Stanley Cavell develops in The World Viewed, of course, and that Deleuze reprises and repurposes in his cinema books, to cite some of its most canonical appearances. Suzanne Buchan in her own essay in her edited volume, Animated Worlds, discusses Cavell’s relationship to animation through the famous exchange he had with Alexander Sesonske. According to Sesonske, Cavell’s definition of cinema effectively excludes animation. Sesonske asserts that, while a given work of animation produces a world, it can never (re)produce the world. With this in particular at least, Cavell agrees. Buchan highlights Sesonske’s distinction to claim that the many worlds animation produces are determined by their various material-technical conditions of possibility, as well as their aesthetics, so that the worlds of stop motion puppet animation will always be distinct from worlds produced via cel animation or computer-generated images, and so on.

Animation renders many worlds, but never the world. It also renders lives—as characters, as gestures, as forms of experience—but not life (as defined in biology). A mountain may be livelier than a mole. Animation operates at odds with the ontological distinctions that have governed the world, not only of the cinematic index but of Western modernity: between real and unreal, animate and inanimate, organic and inorganic, body and image, human and animal and so on. While each animated world may construct its own ontology, animation is an-ontological. As I argue in my recent book, The Animatic Apparatus, it is not at all a coincidence that animation’s emergence as the dominant moving image form (I conceive animation very broadly to include CGI and simulations of all kinds) occurs with a general dissolution of ontological categories. The increasing interpenetration of bodies, images, and data produces new worlds and forms of life from synthetic biology’s creatures of biological bits and bytes to the birth of CGI influencers. The an-ontological mode is clearly also a major player in our post-truth media ecology of alternate facts, filter bubbles, and fake videos—as are animations of all kinds. It may be that the very plasticity and multiplicity of animated worlds and their forms of life make them models of the kind of thinking we do not need rather than the kind that we do.

But I wonder. If animation remained a minor form through the Twentieth century, set apart from (the ideology of) cinema’s central ethical and political calling by its lack of an essential relation to the world, this lack may index its potentialities confronting the pressing contemporary cosmo-techno-political and ethical concerns of the Twenty first (cf. Yuk Hui on Cosmotechnics as Cosmopolitics). While the worlds of a pluriverse are not equivalent to the animatic worlds of imagebeings, animation’s an-ontology makes visible both the groundlessness of ontology writ large and the inevitability of multiple ontologies. For as plastic as the force of animation may be, as Buchan highlights in her discussion of animated worlds and as Thomas Lamarre develops brilliantly in The Anime Machine and The Anime Ecology, it never operates outside of the specific determinations of technics, cultures, and cosmologies—and their co-implications. The questions that follow for me here are: how might animatic worldmaking visualize and negotiate the space in between the largely imperceptible technical articulations of the algorithms of “planetary computing” and the many worlds and creatures we perceive and live in our everyday lives? How might it model new ways to negotiate the in-between (of) worlds of the pluriverse, spaces in which we can live together—convivially—in difference and dialogue? 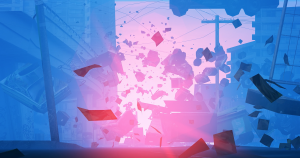 I’d like to end by offering an animated film, one that I first encountered at a talk at SAS 2018 by Lilly Husbands, and which has since become a touchstone for my thinking. Ugly—the product of a collaboration between filmmaker Nikita Diakur, his imaginary friend Red Bear, and dynamic simulation—is a glitchy animated fable for the creatures of the Anthropocene.

— (2018). The Anime Ecology. A Genealogy of Television, Animation, and Game Media, Minneapolis: University of Minnesota Press.

Levitt, D. (2018). The Animatic Apparatus. Animation, Vitality, and the Futures of the Image, Winchester: Zero Books.

Deborah Levitt is Assistant Professor of Culture and Media Studies at The New School. She is the author of The Animatic Apparatus: Animation, Vitality, and the Futures of the Image (Zero Books, 2018), as well as articles on biopolitics, anime, digital cinema, and VR. She is also a co-editor of Acting and Performance in Moving Image Culture: Bodies, Screens, and Renderings (Transcript Verlag, 2012).