An Edited Guide to the Key Concerns

Oskar Fischinger is credited as the father of Visual Music, but what does this really mean? What were his thoughts on “visual music,” a phrase not found in his writings until the mid-1940s (along with “optick music” and “augenmusik”)? Is he labeled the father of the genre due to his far-reaching influence on generations of animators and filmmakers, rather than as its strongest practitioner?

Yet any question as to Fischinger’s place in the genre presupposes a more basic one: what exactly is visual music? There is a hundred year history of Visual Music on film, and a bibliography stretching back centuries. Interest in the correspondences of sound to color, and music to image, extend back to Aristotle, Pythagoras, and Issac Newton. Today, definitions of Visual Music rapidly change as the field expands.[i] William Moritz, who devoted thirty-five years to the study of Fischinger and Visual Music, described in 1986  “A music for the eye comparable to the effects of sound for the ear,” and asked, “What are the visual equivalents of melody, harmony, rhythm and counterpoint?”[ii]

Simplistic ideas of Visual Music presume a direct illustration or translation of music and thus Fischinger’s earlier films are sometimes mistakenly written off as “Mickey Mouse synchronization.” Yet a more accurate preliminary definition of Visual Music would be “the translation of a specific musical composition (or sound) into a visual language, with the original syntax being emulated in the new visual rendition.”[iii] 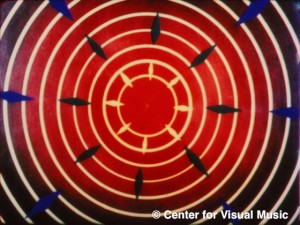 “My films are no illustrations of music,” Fischinger declared in a 1947 statement, “Corrections to Richters [sic] Article.” He explained that in his early Studies he used music simply as “an architectural ground plan” from which he took the time and rhythm [transcription of original]:

With the absolute film, music is used to put it over, but the development of optical expression, the invention of new ways of motion in coordination with the Rythmus given in the music … the invention of new Ways of motion is the main … Idea, the main force.  and the time—or Rythmus cordination with music is secondary of less importance. People who say that [these] films are illustrations to music, are…poor in their imagination…or say so intentionaly to lessen the impact of [these] works (for personal reasons…Probably Richters reason). I found out this way of saying (illlustrations of music) is mostly used by people who feel themselfes to be my adversarys because maybe subconsciously they would like to have done it themselfes but for some reason were unabble to do it.[iv] 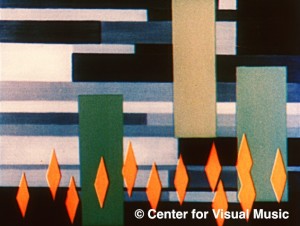 Fischinger also noted in this 1947 statement that not all of his films are sound films; according to his dates, he made silent films for ten years before making any of the synchronized Studies. In a letter to Hans Richter written in the same period (June 16, 1947), he stated, “I never tried to translate sound into visual expressions.”

[iv] Transcription including original spelling of excerpt from 1947 document titled “Corrections to Richters [sic] Article about the History of the Avantgarde.” Unpubished typescript. Collection Center for Visual Music. Richter’s article was published in the 1946 Art in Cinema catalog and contained numerous errors, particularly about Fischinger. 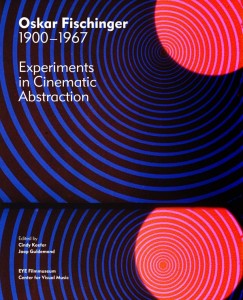 Excerpted from Keefer’s essay in Oskar Fischinger (1900-1967): Experiments in Cinematic Abstractions. Cindy Keefer and Jaap Guldemond, Eds. Amsterdam and Los Angeles: EYE Filmmuseum and Center for Visual Music, December 2012.  Distributed by Thames & Hudson, US release September 2013. Available in Europe at selected bookshops and on Amazon; advance copies in US through CVM.

Cindy Keefer is an archivist and curator, and director of Center for Visual Music in Los Angeles. She curates and presents film and media programs at museums, festivals, and archives worldwide, and consults on museum exhibitions. She has published on Oskar Fischinger, Jordan Belson, Visual Music and experimental animation, edited a new Oskar Fischinger book, and is currently writing a book about Jordan Belson and the Vortex Concerts. As Adjunct Faculty, Keefer taught the History of Experimental Animation at Cal Arts, and has been a Guest Lecturer at USC, ZKM, University of Oxford, Goldsmiths, Cal Arts, UCR, UCSB, Sci-ARC and numerous others. She restored and curated Oskar Fischinger: Raumlichtkunst, a 3 screen HD installation opening in Paris June 2013, previously at Tate Modern and the Whitney Museum.

Keefer has preserved dozens of short films by artists including Fischinger, Belson, Jules Engel, John and James Whitney, Charles Dockum, Harry Smith, Mary Ellen Bute, Harry Smith, Jud Yalkut, John Cage and others, and produced the Fischinger and Belson DVD releases. She has worked with The Fischinger Estate since 1997, and is a member of SCMS, SAS, and The Association of Moving Image Archivists (former Chair of its Access Committee).