Lawrence Jordan’s creative process and personal style of animation reflects an attempt to give birth to a dream. A dream shared with the spectator through the animation of collages/cut-outs and his choice to give movement to nineteenth-century illustrations. In this post I intend to analyze one of his first animated films Duo Concertantes (1961-1964) as a microcosm of the artist’s theatre of the mind.

Jordan works alone, shooting in 16mm gauge until today. Although he had made animated films before, it is going to be with Duo Concertantes that he will culminate his artistic influences into a unique style. The film was acclaimed in festivals and paved way for Jordan’s future explorations in animation.

Jordan apparently took years to finish this film, from 1961 to 1964. Sitney (2002) considers, he made two different films and decided to put them together later on. In that sense it is possible that the first part of the film was made in 1961 and the second part in 1964, but there are no statements from the artist to confirm that.

The first part of the film is entitled The Centennial Exposition. A man with an open book in his hands, in which a drawn cage can be seen on the page while the man walks through pavilions of an exposition. Using black and white engravings from different times and places Jordan constructs a peculiar context for this beginning. Lev Kulechov’s (1924) conveys, in his film theory, that a creative geography can be suggested through editing. That is exactly what Jordan does. The first part of the film is set in a fictional Centennial Exposition, where Jordan created the connections between pavilions and the weird machinery inventions presented there, according to his imagination and manipulation of different illustrations. For instance, Jordan’s character walks from a Philadelphia HC Fox & Sons advertising to an ad from a company set in Boston, and later on to another ad by Aikin Lambert & Co. in New York. The space is conceived by the artist and created in the spectator’s mind through image associations. The use of old illustrations gives a sober atmosphere to the animation. 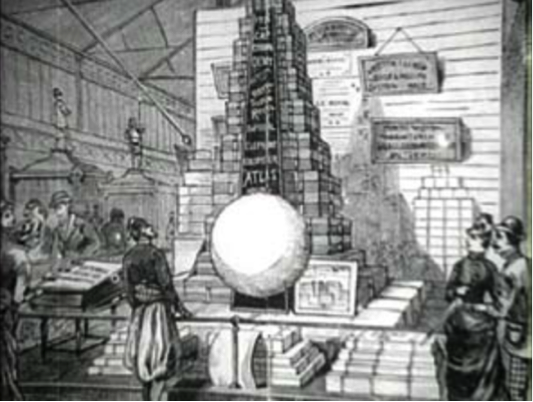 The visual continuity looks carefully planned by Jordan. In one scene the man throws a ball several times up in the air, on the last time the scene is cut to the one with a giant ball falling down the illustration of a machine labelled Emperor Leviathan 1876. That vertical axis continuity will soon be broken by another object in the shape of a stamp handle moving left to right inside a vitrine. Its movement will be visually connected to the giant dancing flowers of the next scene.

It is possible to state that there is more happening in the frames than the simple narration of its movements can predict. The spectator is asked to have a different kind of attention, different from the traditional mainstream animations. Jordan enables the viewer to add something of his own, connecting images in an attempt to create meaning. As in a dream sequence, we have started the film seeing a man’s allegedly reality to soon travel into his imagination. That man can be both, the errant man character from the beginning, but also Jordan, whose creative process led us to a peculiar combination of images, connected by free associations, as the artist himself affirms. It is clear that his editing process doesn’t necessarily follow the same principle. The montage of the sequences reveals a precise understanding of cinematic language and helps to enhance the power of his images.

The second part of the animation is called Patricia gives birth to a dream by the doorway. The music in this part is in a calm and melodic mood. We see the image of a woman standing by the doorway looking to an exterior landscape with a lake surrounded by mountains, and a dog. The action in this part happens all inside the same shot. However, the division of what occurs inside and outside the door creates layers that can be interpreted as the relation between the conscious and unconscious mind. 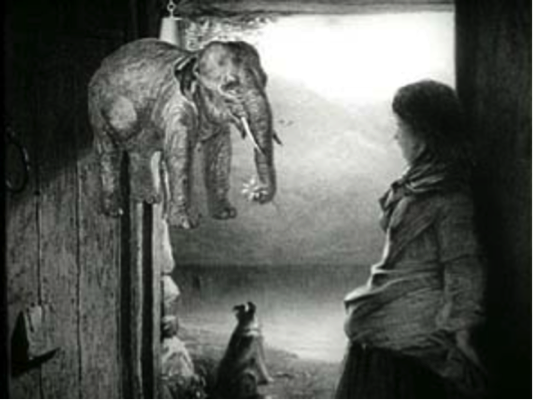 Different images pass by the doorway and an interesting set of images happens when a canvas appears in a pedestal in the external environment. In a mise-en-abyme structure the screen where Jordan’s film is seen by its spectators is the first canvas. The doorway where Patricia stands will be the second one, with a frame that defines the space outside the door as the place where the dream’s action will take place. When a blank canvas is placed there, the film inside the film structure is complete. No longer the theatre of the mind, but now the ‘cinema’ of the mind. The blank canvas stays for a while as if inviting the spectator to fill the space with their own imagination. Towards the end, all the previous images disappear and the egg with butterfly wings becomes a recurrent theme. Slowly the egg is lifted by its wings, moving like in a ballet. Two little horses get out of the egg and fly away the scene in a triumphant finale.

Part of the alchemy of his films is that these images can be reinterpreted according to the viewer’s imagination. It is the freedom of his process that allows the spectator to enjoy without judgments. Lawrence Jordan goes on producing his films in an old school style, faithful to his creative process, yet accessible to be discovered by new audiences and generations through the internet. An excerpt of Duo Concertantes is available on the artist’s website and can be seen here.

Christine Veras is a PhD candidate at Nanyang Technological University, School of Art, Design and Media in Singapore. Her PhD research in Animated Installations: astonishment and the quest for an expanded cinematic experience uses physical and digital multimedia strategies to connect animation, contemporary art installations and visual music to provide a unique experience for the public.

2 responses to “LAWRENCE JORDAN: GIVING BIRTH TO A DREAM”