Actor (2013) is a 12 minute film where a performer wanders round a space reciting the final chapter of Anthony Burgess’s A Clockwork Orange[i]. His performance, guided by an unseen director, was recorded not by a film camera, but by a motion capture suit, a close-fitting leotard with gyroscopes at every joint, transmitting information wirelessly. No camera, no lights, no armatures.

This provoked speculation on the relationship of the moving figure to the identity of the performer cloaked in the computer generated character (In this case a knight in armour).

Is the actor his movements? If you take away the body but leave the movement, even as a stickman wireframe, does something of the person in the background persist? Does this still persist when clothed in the pre-loaded characters the software comes shipped with; a dinosaur, a comedy duck? Our identity is profoundly bound up in our appearance, but also the way we move, our gestures. Shakespeare played with this in Julius Caesar, where Cassius recognises Cinna by hearing him walk, and again in The Tempest where Ceres says “Great Juno, Comes ; I know her by her gait”

Parkinson’s disease can be diagnosed by characteristic idiopathic movements, diagnosed by motion capture, and here the disease malevolently asserts itself over the normal individual gait of the body like a controlling puppeteer over a marionette. Freud in his 1919 essay talks not only about automatons producing the effect of the Uncanny, but also epileptic fits. In Ian Curtis’s unsettling yet compelling “dance” as he performs She’s Lost Control with Joy Division, his performance is half puppet, half fit – offstage he was in reality epileptic. There is a tension between the natural and the performed movement which plays out in many spheres in both public and everyday life.

In Actor the performer moves in an exaggerated actorly way, partly because I asked him to do that and partly as his own contribution to the piece. The result is partly mannered, and partly powerfully emotive. There is an interesting area to be explored in the realm of motion capture from the point of view of art as opposed to dance, where many performers have used it is live or surrogate performance.

Interestingly, a form of motion capture predates film itself. Étienne-Jules Marey, the French physiologist whose work was a pointer to the future motion picture camera and projector, created in 1882 a chronophotographic gun to investigate human locomotion. In his earliest experiments the subjects wore black suits with metal strips as they passed in front of a black backdrop, and these have a remarkable similarity to the present day gyroscopic capture suit. 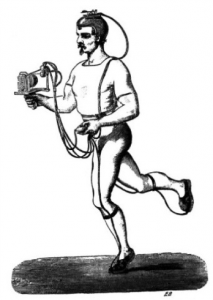 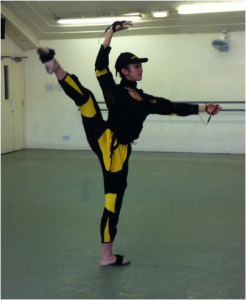 Marey influenced Muybridge’s later work –and both in turn affected Marcel Duchamp, whose ground-breaking painting Nude Descending a Staircase Number 2 of 1912 is heavily indebted to their photographic studies.

There is a point at which unconscious movement becomes consciously aesthetic, as with Ian Curtis, and this leads to the artforms of mime and dance. But perhaps unconscious “normal” movement translated into MoCap allows us to discard appearance. We can then focus on the profound affect of the relatively casual movement beneath. I’ll end with a potential signpost to this and future work, with an example of the intriguing work of Beverley Hood, and her ‘MoCap Conversations’.

Steve Hawley is Professor of Art and Media at the Manchester School of Art and an artist who has worked with film and video since 1981. He is interested in alternative forms of narrative, and how emergent forms of narrative can create new kinds of story making. His work has been shown in galleries and broadcast worldwide, including MoMA, the Stedelijk, the Reina Sofia, BBC2, Channel 4 and WGBH Boston.

[i] In Actor, which was shown this year at Bangkok Arts and Cultural Centre, the final redemptive chapter of Anthony Burgess’s A Clockwork Orange, Chapter 21 (which was omitted in the American edition of the novel and in Stanley Kubrick’s film), is finally filmed, albeit without a camera. In it, the superdroog Alex sees the error of his ways, decides he has lost all energy for and thrill from violence and resolves to turn his life around. Character Design Andrew Brownridge, collaboration Dr. Peter Twigg.

One response to “Motion capture; the inner life of the marionette.”